Yucatan Giving Outreach A.C.: Expats Make a Difference in the Lives of the Underprivileged

So many times in life the largest gestures of the heart start with the most mundane of actions. Yet another expat was packing up his house and moving back to the US. He called the only friend he knew who had a truck, Kim Davin, to come and help him get rid of the last pieces of furniture left in his house. They loaded up the truck and proceeded to do what they probably would’ve done in the States, take it to Goodwill or Salvation Army, or something of the like here in Mexico. They ended up taking it to a shelter for the elderly. What Kim saw when dropping off the stuff shook her to her core. It was a terribly depressing sight of older, forgotten souls living in a destitute and lonely condition. The facilities did not have enough money to provide proper care or nutrition to these elderly people who seemed to have been abandoned. They suffered from illness, Alzheimer’s, dementia; this experience had a profound effect on Kim.

As I spoke with her she remembers, “There was a lack of basic human needs, things we need for our own dignity were lacking. It had a profound effect on me.” After dropping off the furniture she had a long conversation with the administrators about what they needed in order to better the living conditions. Arriving home, she went straight to her Facebook and started posting about the paucity of basic necessities and asking her friends to donate the articles most needed. 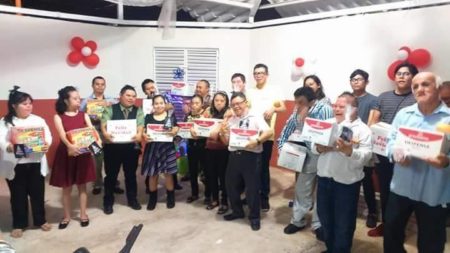 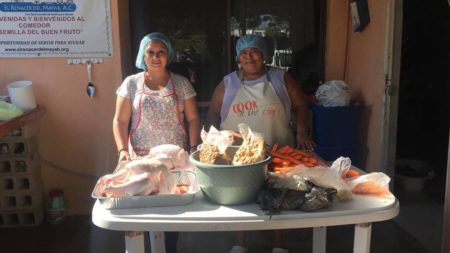 In the weeks following, Kim found herself going around to many other shelters including soup kitchens, orphanages, even a hidden shelter for girls who were caught in the sex trade or sexually abused in their homes. She would meet with the directors and get a list of needs and then post those needs on Facebook. At this point she wasn’t a foundation so she didn’t collect money, but she was a concerned citizen who collected clothes, shoes, food, and first aid materials and brought those items to shelters. She started creating a network of concerned citizens, foundations and shelters. As she spent more time in these places she came to realize that of the 421 shelters in Merida, 350 were in crisis. They were struggling, lacking food; they had little or no government funding, no help with electricity bills, no tax deductions. She felt compelled to help on a larger scale. She started working under the umbrella of established foundations in order to collect money as well and provide invoices and tax deductions for donations.

In December of 2015, Kim crossed paths with Dave Omer Dodge when Dave asked Kim to help out with his toy drive, Toys for Joy, which was to be part of the grand opening of his bed and breakfast Ochenta y Dos. Dave donated all the toys to the shelters Kim was working with and the two became friends. The following year in 2016, Kim hosted the 1st Annual Chicas for Charity Polo Tournament which was held the Yucatan Polo Club. This was a widely successful and festive charity event where women played polo and all the proceeds of the event went to help out the various charities Kim was now involved with. Dave, who has extensive experience in the non-profit marketing sector back home, was invited to the event. His interest was piqued and he realized that Kim was really on to something with the Chicas for Polo event and that with his help, the two could pull together and make a huge difference in the lives of the underprivileged here in Yucatan. In December of 2016, Dave hosted the Toys for Joy drive again and soon after the two joined forces in what would soon be Yucatan Giving Outreach A.C.

Over this year, 2017, the Yucatan Giving Outreach A.C. became a foundation and has established itself as a principal leader in charity fundraising and community outreach. They set up volunteer programs, raise money and collect material donations for several shelters in the Merida area. One of the existing projects Kim started that is now under the umbrella of the outreach is Cambiando Vidas con inglés (changing lives with English) which is a program where expats volunteers teach English to students who are preparing themselves for the workforce. This program is offered in many shelters with the largest program being offered at Arca de Noa a drug rehab center and Renacer Soup Kitchen. They also do much work at Caimede orphanage where there are over 300 orphans. The Caimede Art School is a program where children can participate in weekly art classes given by expat artists. At Caimede they also have an annual Halloween party as well as a Christmas tree party where they eat, sing Christmas carols and decorate 19 trees placing them all over the orphanage. All the toys collected at the annual Toys for Joy drive at go to the orphans at Caimede.

In addition to all the programs they are involved with, the yearlong effort of planning their first annual The Season of Sharing has also come to fruition this holiday season. The Season of Sharing hosts 4 major fundraising events. It started on November 26th with the Chicas for Charity Polo tournament, then on December 2nd there was a themed “Black & White Casino Night” party at the beach, on December 12th a private event Patty’s Chicas & Cocktails for Charity was held at Patti Roger’s house and this Saturday, December 16th at 7:00pm Dave’s annual Toys for Joy is being held at Ochenta y Dos Bed and Breakfast.

This is the season for giving and the Yucatan Giving Outreach A.C. is a grassroots organization headed by people whose altruistic heart is leading them to achieve great things. It reminds us all that by giving just a little bit we can make a difference in a life that seems to have fallen through the cracks. Ordinary people can achieve extraordinary things; just sometimes those ordinary people need a little help along the way. In the end we are all in the world together and life is so much better when we help each other out.

For more information, to get involved, volunteer or donate you can visit The Yucatan Giving Outreach A.C. at www.ygo.mx or visit their FB page https://www.facebook.com/groups/300041776786182/