MERIDA — Some of the best Brass artists and groups in the world have come to the Yucatecan capital for a week of classes, master classes, concerts, recitals, competitions and expositions. You definitely cannot miss these events starting Friday Dec. 15.

All the guest artists and invited groups to the fourth edition of the Merida International Brass Festival 2017 are world-famous artists that will make Merida their home for one week. You must live the experience of watching these tremendous musicians perform live.

Besides, more than 140 music students from all over Mexico and other countries such as Colombia and United States registered in order to be able to attend the master classes imparted by these great maestros that come from Canada, US, France, Switzerland, Spain, Holland and Mexico.

Featuring 13 concerts and recitals in only 6 days, Merida International Brass Festival is a one-of-a-kind event not only in Mexico, but in all Latin America.

From the New York Philharmonic and the London Symphony to the Great Wall of China; from the Berlin Philharmonie and the Canadian Brass to Tokyo’s Suntory Hall; from a Grammy nomination and an honorary doctorate; to being heralded as ‘the official trumpeter for the NHL Stanley Cup finals’, Jens Lindemann has performed every style of music and entertained every audience imaginable.

Francis Orval, internationally renowned soloist and recording artist, is Professor of Horn at the Musikhochschule in Trossingen, Germany.

Born in Liège, Belgium, he became an American citizen in 1987 during a seven-year stay in the U.S. He has had 20 years experience as principal horn with major orchestras in Belgium and Luxemburg before going to America in 1983 and serving as a university professor at several institutions.

Graduated with honours in trombone in 1998 at Vincenzo Bellini Musical Institute of Catania under the guide of M° Camillo Pavone, he has collaborated as principal Trombone with “Teatro alla Scala” of Milan and Accademia Nazionale di Santa Cecilia Orchestra in Rome .

Tomoko Mukaiyama is a Dutch-Japanese pianist, performer and visual artist based in Amsterdam. She has been engaged by many prestigious orchestras and ensembles throughout the world, like the Ensemble Modern in Frankfurt, the London Sinfonietta and the Royal Concertgebouw Orchestra, among many others. 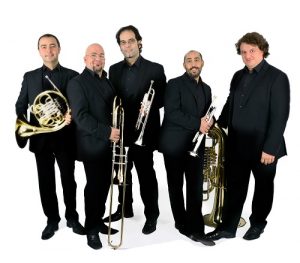 Spanish Brass is one of the most dynamic and admired brass groups on the international music scene. They have participated in some of the most prestigious venues and festivals around the globe, as well as such signal moments as the gala award ceremony of the Principe de Asturias Prize (1995). Right now they are just coming back from a tour across the USA, including several cities in California, and a concert at Buffet musical instruments’ showroom in New York City. 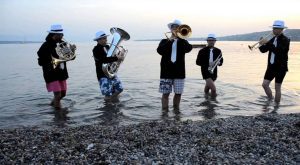 Established in 2001, the Geneva Brass Quintet is a chamber music group of Swiss musicians. After studying at the Geneva Conservatory, they all graduated with a Master of Music. Eager to create a close-knit musical unit and being particularly attracted to chamber music, they formed the ‘Geneva Brass Quintet’ (GBQ) with the aim of sharing their passion with the public.

* Tickets on sale at Centro Cultural Olimpo (many of the concerts are free admission).