Deported marine sent back to the US

When Chavez finally walked Thursday December 21 into the United States through the Tijuana-San Diego border crossing, he was speechless and still in disbelief that he had won his battle to regain his permanent U.S. residency.

It was an historic day for the Mexican-born father of three who returned to the U.S. as a grandfather. He is considered among the few former service members to regain permanent residency out of hundreds of veterans who have been deported.

“I was very nervous, very excited and it was still, I can’t believe it until now,” Chavez said standing outside a McDonald’s, just inside the California side of the border.

He was met by hugs and screams of “Welcome!” and “Bienvenidos!” by a group of veterans and immigrant rights advocates waving U.S. flags.

Chavez said it will be an unforgettable Christmas because he will spend it with his family. 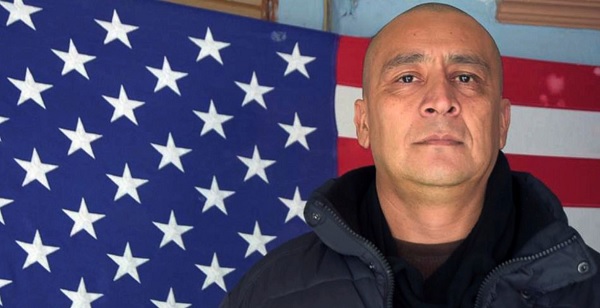 “I’ll be able to wake up Christmas morning, and hug them and let them know I’m home,” Chavez said, his father standing by his side.

His father, Antonio Chavez, told reporters in English and Spanish that he was grateful to have his son finally home.

“For those of us who have served and fought for this country, we can’t rest until they all come home,” said Fletcher, among the first to welcome Marco Chavez back with a big hug.

Fletcher, a former California state lawmaker, founded the Honorably Discharged/Dishonorably Deported Coalition that tries to help deported veterans get back to the U.S.

Earlier this year at the request of Fletcher’s organization, California Gov. Jerry Brown pardoned Chavez for a 1998 conviction for animal cruelty in a dog beating. Chavez said another person was responsible.

Months after he was pardoned, an immigration judge granted Chavez’s request to return.

Brown, a Democrat, said Chavez served the U.S. and deserved “to come back home.”

Brown also pardoned two others veterans deported to Mexico who are waiting to win their legal battles to return.

Chavez was a baby when his parents brought him to the United States. He joined the Marine Corps at age 19, served four years during peacetime and received an honorable discharge.

He had been sentenced to two years in a state prison for his conviction and was released early because of good behavior. A federal judge, however, used the conviction to deport him in 2002.

Chavez, who whose three sons were young at the time, stayed in Tijuana. He said he had to learn Spanish and find work in a country that was foreign to him.

His wife moved the family to be with him but found life too difficult in the violence-plagued Mexican border city where schools are lacking and jobs are scarce. She eventually moved back to the United States, settling with his sons in Iowa after they divorced.