Romance, dancing, singing, painting and theater, among other artistic expressions, made the ninth edition of the “Noche Blanca” a delight for all who attended…

MERIDA – The second “Noche Blanca” (White Night) of 2017, with its 147 activities in 65 venues and more than 600 artists, brought together more than 40 thousand people of all ages with the desire to enjoy the activities, as the year of Merida as American Capital of Culture draws to a close.

The stellar events attracted heavy crowds in several scenarios, as was the case of the Cuban singer-songwriter Francisco Céspedes in the Plaza Grande.

The parks of the Historic Center’s neighborhoods were the venues of different shows such as the night of jazz and soul with Moonlight Jam in Santa Lucía’s park; the rock of the 70’s with Los Golden Years, at San Juan’s park; and María San Felipe in acoustic, in “La Mejorada” park.

Other artists summoned for La Noche Blanca were Verónica Valerio, with songs in harp and voice, in Santa Lucía park; María Teresa Gómez, with “América por la paz del mundo”, in the park of Santiago.

The evening included the inauguration of the exhibition of graphic work by maestro Manuel Lizama entitled “Sentimientos”, in the City Museum, and other exhibitions in 31 galleries, with the participation of several artists, techniques and themes. 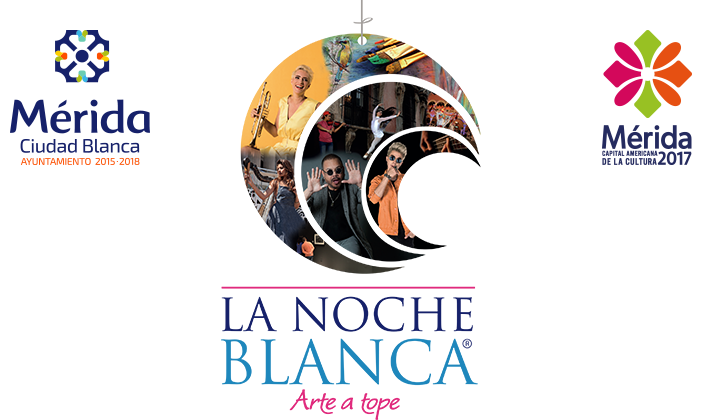 Gastronomy was also feature in the night of art and as is tradition, the park of San Juan was once again home of the culinary show where were included countries like Germany, Argentina and Colombia, among others. In addition, restaurants affiliated with Canirac who joined the program offered special discounts and promotions.

Just before midnight was a featured concert of Mario Bautista, who returned to the city to settle a debt with his Yucatecan fans, after the cancellation of his concert in the past summer edition of “La Noche Blanca”, due to rain.