Mérida, Yucatan — A new amusement park has been officially inaugurated in the Yucatecan capital.

Located in the Yucatan Fairgrounds of X’matkuil, the park began construction in March of 2017 with an investment of 80 million peso. Although construciton was delayed by two months, the park still opened for the New Year. 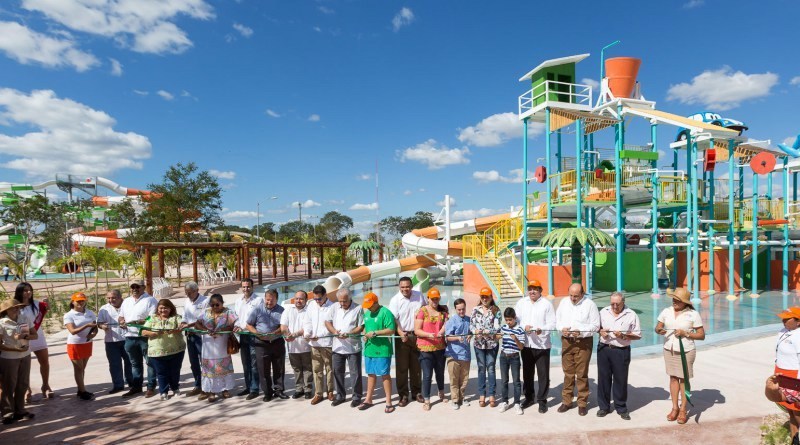 Yucatan Governor Rolando Zapata Bello said, “This space provides children and young people with a place of family coexistence, which contributes to strengthening the social fabric and security because It offers alternatives to lead a healthy lifestyle.”

Baxal Ja is a park of 30,000 square meters with diverse attractions that includes eight water slides between 12 and 16 meters tall as well as large pools, a lazy river, multi-game site, surf track and children’s area.

The president of the Governing Board of the Promoter Institute of State Fairs, Juan José Abraham Achach, explained that this fun center “has complementary works such as a visitor’s access booth, doctor’s office, bathrooms, dressing rooms, food area, terraces and walkers,” adding “ everything will be ready so that this Monday January 1, the park will open to receive visitors.”

In its ecological-interactive area, Baxal Ja has a butterfly farm with a laboratory for butterfly reproduction as well as 19 endemic species that total an initial population of 1,200. It also offers an aviary where 300 birds of 56 different species are found in a green area with plants, shrubs and waterfalls that simulate their natural habitat.

It also has a farm with miniature animals that includes the African goat, Sicilian burritos, mini pigs, mini ponies, appaloosas, large mules, Aztec roosters, four-horned sheep and a pair of large llamas among other animals.

Baxal Ja will have its own operational schedule different from that of the fair. Baxal Ja will be open from Tuesday to Sunday and holidays from 10:00 a.m. to 6:00 p.m.

Admission is 80 pesos per person.