By Yucatan Times on November 28, 2017
On Sunday, October 15, St. Peter’s Square in the Vatican was decorated for the ceremony of canonization of Cristóbal, Antonio and Juan, the “Child Martyrs of Tlaxcala”, killed for hatred of the faith in Mexico between 1527 and 1529.
On the balconies of the facade of the Basilica of San Pedro hung banners with the faces of the new Mexican saints.

The three Child Martyrs of Tlaxcala, Cristóbal, Antonio and Juan, were the first indigenous people evangelized by Franciscan and Dominican friars upon their arrival in Mexico, after La Conquista (between 1527-1529).

• The Catholic Church recognizes them for unreservedly joining Christianity and being martyred while fighting idolatry and evangelizing in their communities.

• The period of evangelization in which the story of the martyred children was developed is contextualized in two documents: “The Royal Charter of Charles V” -“La Cédula real de Carlos V”-(June 16, 1523), which ordered the destruction of idols in New Spain, and the Letter that Fray Juan de Zumárraga wrote to the General Chapter of Tolsa, France –Capítulo General de Tolsa- (June 12, 1531), in which he reported the destruction of more than 20,000 idols.

• For centuries, the historians of the Mexican Church have celebrated them as the “protomartyrs” not only of Mexico, but of all Latin America.

• The children were beatified on May 6, 1990, at the Basilica of Guadalupe in Mexico City, by Pope John Paul II.

• During his visit to Mexico in March 2012, Pope Benedict XVI invited Mexican children to follow the example of the faith of child martyrs.

• On June 30, 2016, the Vatican announced the approval of the declaration of the Blessed Martyrs of Tlaxcala as patrons of Mexican childhood.

• On March 23, 2017, Pope Francis approved canonization, which took place on October 15 in St. Peter’s Square, in the Vatican.

· He was born approximately in 1515 in Atlihuetzia, in the current territory of Tlaxcala.

· He was the eldest son of the cacique Acxotécatl and Tlapaxilotzin, one of his wives, and, therefore, destined to inherit his property and the prehispanic tradition of his people.

· Cristóbal was educated by the Franciscan friars who evangelized the region, between 1524 and 1527.

· The child embraced the Christian faith and asked to be baptized. Cristóbal tried to Christianize his family, exhorting his father and other relatives to leave drunkenness and the worship of idols.

· As part of his actions, he broke some idols in his town and spilled the pulque that his family kept in jars.

· The people, who were not yet converted to Christianity, asked for an exemplary punishment for the child.

· His father, furious at the evangelizing work of his son, hit him with a thick stick and threw into a fire.

· Cristóbal died in 1527, at 12 years of age. His body was rescued by Fray Andrés de Córdoba (Franciscan).

· His remains were later transferred to the former convent of San Francisco, currently the Cathedral of Our Lady of the Assumption of Tlaxcala. 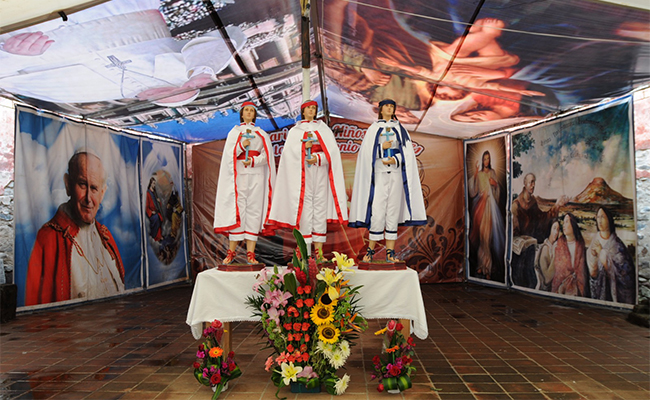 · Antonio was the grandson of Xicoténcatl, Lord of Tizatlán and future heir of the Señorío. Juan was Antonio’s servant.

· Both were educated at the Franciscan school in Tlaxcala.

· In 1529, Fray Martín de Valencia, superior of the first 12 Franciscans who arrived in Mexico, offered Fray Bernardino Minaya and other Dominican religious the support of Juan and Antonio on their way to evangelize Oaxaca.

· Upon arriving in Puebla, in Cuauhtinchán, Juan was attacked by two indigenous people, who resisted their idols being destroyed. Antonio tried to defend him, but he had already died. Antonio was killed too.

· The bodies of the children were thrown into a ravine. When they were found dead, they were buried in a provisional chapel.

· Fray Martín de Valencia lamented the crime a lot and the murderers were hanged.

· The canonization ceremony was presided by Pope Francis, in St. Peter’s Square, in the Vatican, on October 15, 2017. There was a representative of Mexico’s Presidency of the Republic and the participation of the Governor of the State of Tlaxcala and his entourage. Approximately 500 Mexican pilgrims attended, most of them Tlaxcalans.

On the same date, the following were canonized:

o André de Soveral, Ambrosio Francisco Ferro and Mateus Moreira, along with 27 other comrades who were martyred in 1645, in Rio Grande do Norte, Brazil. (Brazil)

o The Piarist priest Faustino Míguez, founder of the Calasanzio Institute of the Daughters of the Divine Shepherdess. (Spain)

By Alejandro Azcárate for The Yucatan Times with information provided by Fco. C.R. from The Vatican, Rome, Italy.