PLAYA DEL CARMEN, Q. Roo  — Tourist Police in the vicinity of Playacar in Playa del Carmen arrested a man Monday Oct. 30 for selling fake jewelry items along the beach, but not before firing off a round of shots.

The gunfire, which was heard along the Riu and Sandos hotels, jolted beachgoers as police attempted to stop the fleeing man.

Elements of the Tourist Police apparently tried to stop an Alpaca salesman who police are trying to crack down on for selling fake metal jewels. However upon seeing police, the man fled along the beach where he entered the sea on a jet ski. 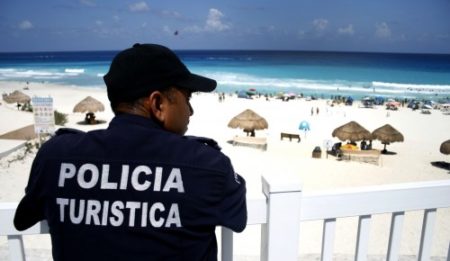 During the initial footchase, police apparently fired their weapons into the air in an attempt to stop the fleeing beach vendor.

The vendor, who was undeterred by the gunfire, fled but was later arrested by the federal police who reportedly used a federal helicopter to locate the man.

There were no reported injuries.