Hurricane watch on Friday for northeastern portion of Yucatan Peninsula

Tropical Storm Nate, which strengthened early Thursday Oct. 5 from a tropical depression in the Caribbean, continues to drench Central America with heavy rain.

The National Hurricane Center in Miami said a hurricane watch was in effect for the northeast portion of the Yucatan Peninsula, including Cancun and Playa del Carmen.

Nate is expected to approach the east coast of the Yucatan peninsula late Friday.

The storm is on track for a likely U.S. landfall between southeast Louisiana and the Florida Panhandle on Sunday, potentially as a hurricane; but it is too early to determine if Nate will strengthen into a hurricane as it approaches the U.S. mainland,

As of 8 a.m. ET Thursday, Nate was about 10 miles south of Puerto Cabezas, Nicaragua. The storm was moving northwest at 8 mph, packing maximum sustained winds of 40 mph.

A tropical storm warning is in effect for portions of Nicaragua and Honduras. Up to 30 inches of rain is forecast in Nicaragua, which could lead to life-threatening flash floods and mudslides, the National Hurricane Center said.

Two people have already died in Nicaragua due to the storm, and three others were swept away by flash floods, the Associated Press said.

In Nicaragua, its arrival followed two weeks of near constant rain that had left the ground saturated and rivers swollen, according to the Associated Press. Authorities placed the whole country on alert and warned of flooding and landslides.

Heavy rainfall is also forecast in portions of Honduras, Costa Rica and Panama through Friday night.

“Since the system will be moving over very warm waters, we could quickly have a powerful hurricane on our hands,” said AccuWeather meteorologist Dan Kottlowski. 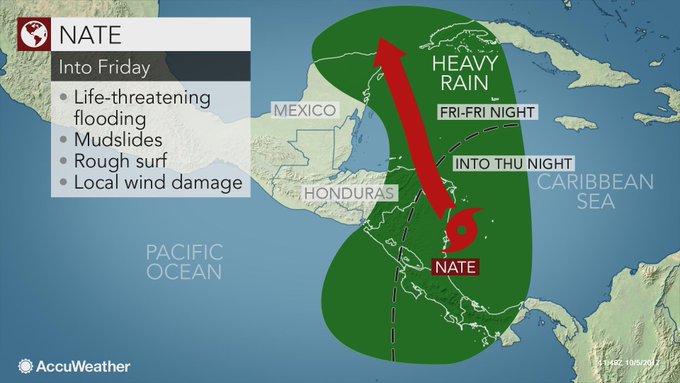 The hurricane center’s map shows a cone of the storm’s probable path extending from southeast Louisiana to a western portion of the Florida Panhandle. That would spare areas hardest-hit by Hurricanes Irma and Harvey.

After Nate, Kotlowski said the Atlantic basin, which includes the Caribbean Sea and Gulf of Mexico, could yield one more major hurricane, a Category 3 or stronger.

AccuWeather projected a total of 17 tropical storms, which includes 11 hurricanes, in the Atlantic by the time the hurricane season officially ends at the end of November.