Over the past four decades, Americans have voted Mexico the world’s best place to live or retire overseas in the way that really counts: They’ve packed up and moved there. This country is home to more American expats and retirees than any other, with various surveys indicating at least 1 million and as many as 2 million Americans have moved to Mexico.

This shouldn’t surprise anyone. It’s easier for an American to get to Mexico than to any other country besides Canada. Why do Americans choose to go south of the Rio Grande rather than to the great white north? The weather. Americans looking to start a new life in a new country are often looking for three things: warm weather, beautiful beaches and a low cost of living. Mexico competes handily in all three categories. 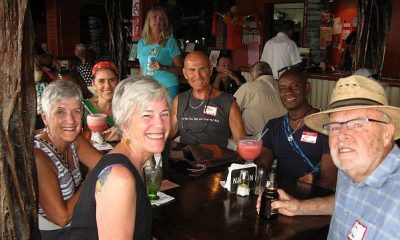 This big, diverse country offers dozens of great living options, from colorful and historic colonial cities like San Miguel de Allende, Cuernavaca, Guanajuato and Oaxaca to beach towns like Playa del Carmen and Tulum on the Caribbean coast and Puerto Vallarta and Mazatlán on the Pacific coast. Here’s why many Americans choose to retire in Mexico:

A low cost of living. While the living is not as cheap as it was in the 1970s when Americans began migrating here in volume, it’s a global bargain and more of a budgeter’s delight right now than it’s been in a long time thanks to the U.S. dollar’s strength against the Mexican peso. In some parts of the country this translates into incredible real estate deals. But even where real estate trades in U.S. dollars (as it does in many Mexican markets, including Mazatlán), the strong dollar makes everything else — from a liter of gasoline and a week’s worth of groceries to a suite of bedroom furniture and a night out on the town — a bargain. Two can dine at a five-star restaurant, enjoying three courses and good wine, for less than $50.

The country is familiar. The Mexican government is a stable democracy, with executive, legislative and judicial branches functioning in a similar way to those in the U.S. When shopping you will be able to find many similar goods to those you enjoyed in the U.S. If you’re itching for an adventure in a foreign land that’s not too foreign, Mexico could be the experience you seek.

It’s easy to go back and forth. You can drive down as often as you like without worrying about plane fare, making Mexico a top choice for part-time living.

Many Mexicans speak English. Mexico is used to North American expats and tourists, and many locals, especially in the service industry, are able to communicate effectively in English. This can make things like navigating the residency process at the immigration office and managing the real estate purchase process with your attorney much easier.

Property markets in many areas of Mexico are depressed. The great recession took its toll in this country, especially in the areas popular as second home markets among Americans. Many places still have not fully recovered, which provides an advantage for buyers.

Long tourist stays. Automatic six-month tourist stays and easy and fast immigration make it possible to come and go and spend as much time in the country as you’d like. You can maintain a second home here and rent it out when you’re not using it yourself without having to bother with the expense of obtaining formal resident status.

An easy move. Moving to Mexico can be as hassle-free as an international move gets. Nothing’s as easy as loading up a truck and driving south. Your entire moving budget could be gas and tolls.

You can return easily to the U.S. to use Medicare. Mexico offers excellent health care, but Medicare generally won’t pay for it. Medicare doesn’t cross any border. However, if you retire in Mexico, you’d be only a drive or quick flight away from accessing your benefits. If you’re nearing or over age 65, being able to easily return to the U.S. to use Medicare is a compelling advantage. To do this you will need to keep and continue to pay for Medicare coverage in addition to any other health insurance you might opt for. Retaining Medicare coverage can be a good strategy for any American retiree moving to a foreign country because it provides a safety net if you want to return to the U.S. later or need expensive health care treatments.