You’re invited to enter video contest for expats in Mexico

Expats In Mexico – The Expat Guide to Living in Mexico – is celebrated its first anniversary by launching an “I Love Mexico” video contest on Sept. 16, Mexico’s Independence Day.

Expats living in Mexico, aspiring expats who want to make Mexico their home or people who love visiting Mexico are invited to register at the online magazine’s http://www.expatsinmexico.com/love-mexico-video-contest/ Website, and then produce a 3-minute or less video showing why they love Mexico. The winner of the “I Love Mexico” video contest will win a $300 Amazon gift certificate. The second place winner will receive an Amazon $200 gift certificate and third place will receive a $100 Amazon gift certificate.

“Mexico is home to over 1 million expats and is the #1 destination for Americans moving to another country,” said Robert Nelson, the online magazine’s co-owner. “There seems to be increasing interest in moving to Mexico lately, often spurred by political turmoil in the U.S. A recent survey conducted by online expat community InterNations ranked Mexico as the third best place in the world for expats, while the U.S. was ranked just 43rd out of 65 countries overall, 17 places lower than 2016.

The contest begins September 16, 2017 and ends at 11:59 p.m. October 15, 2017. Winners will be announced on expatsinmexico.com and through Expats In Mexico social media platforms, including Facebook, Twitter and Instagram. 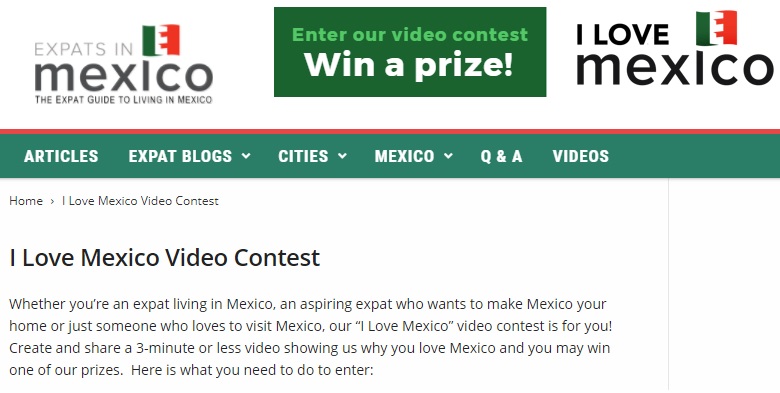