Officials warn of unprecedented destruction in Florida from Irma

As Hurricane Irma pushed through the Bahamas and onto Cuba on Friday Sept. 8, officials in the United States ramped up the urgency and depth of their warnings to get to safety before its destructive winds and storm surges arrive there Saturday, the New York Times reported.

The storm, downgraded to Category 4, continued its destructive churn through the Caribbean overnight, with Turks and Caicos the latest to be swamped. Further
east, residents in places like Barbuda and St. Martin braced for another hit in the coming days from Hurricane Jose.

Officials are cautioning Florida residents steeled by prior hurricanes to not underestimate Irma, which Gov. Rick Scott said would be “way bigger than Andrew,” referring to the major storm that hit the state in 1992. Brock Long, the FEMA
administrator, cautioned that everyone in the Southeast United States, from Alabama to North Carolina, should be monitoring the storm and making preparations.

“I can guarantee you that I don’t know anybody in Florida who’s ever experienced what’s about to hit South Florida,” Mr. Long said on Friday. 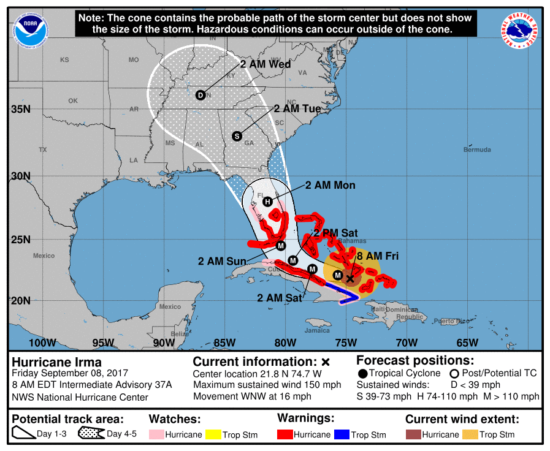 Here’s the latest:
• The National Hurricane Center said Irma remained “extremely dangerous,” with winds of 150 miles per hour and the Florida Keys at risk of “life-threatening inundation.”
• Ferocious winds and rain could hit the Florida Keys by late Saturday, with the hurricane reaching heavily populated areas of South Florida on Sunday morning.
• The hurricane battered the Turks and Caicos Islands early Friday as it headed toward the southeastern Bahamas, where 20-foot storm surges are expected. Tourists on Cuba’s northern coast were also evacuated.
• At least 19 people have died because of the storm: nine in the French Caribbean, four in the United States Virgin Islands, three in Puerto Rico, one on the Dutch side of St. Martin, one in Barbuda and one in Anguilla.