More than three times as many Monarch butterflies are expected to pass through Michoacán and the State of México during the annual migration this year, Travel + Leisure reports.

Considering last year’s kaleidoscope—yes, that is the incredibly adorable name for a group of butterflies—covered almost two-and-a-half acres, that’s a giant jump and a bit of hope for conservationists.

The migration numbers have been decreasing since hitting an all-time high in the 1996-1997 season with a migration covering more than 46 acres—and eventually reaching an all-time low in 2013-2014, where the swarm barely covered an acre. 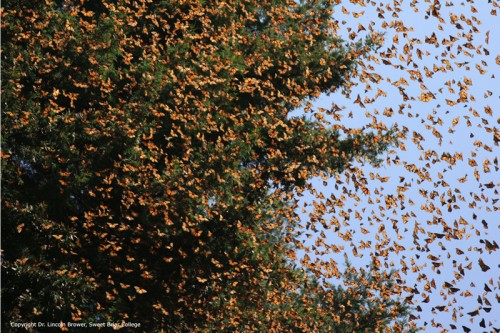 What this means for travelers: It’s a good time to get out there and take in the natural phenomenon for yourself. According to U.S. Interior Secretary Sally Jewell in a quote to the Mexican press, it’s only going to get better: “[The goal is] 225 million monarch butterflies returning right here to Mexico every year. We believe we can get there by working together and it sounds like we may be on our way, we hope.”