Majority of Mexicans disapprove of U.S. under Trump: poll

Sixty-five percent of Mexicans now view the U.S. unfavorably — the highest disapproval rating from our neighbors to the south in 15 years, according to a new poll from the Pew Research Center.

By comparison, only 29 percent of Mexicans disapproved of the United States in 2015. 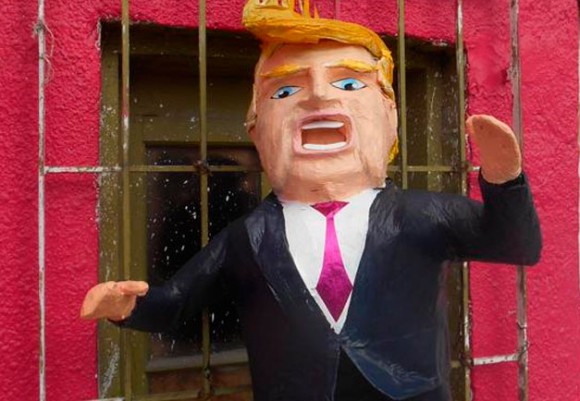 Also, 55 percent of Mexicans believe that Mexico’s economic ties with the U.S. are good for their country, down from 70% in 2013.

Experts say that Americans should not be quick to dismiss any finding of Mexican public opinion.

“No country arguably affects the U.S. on a daily basis, from the [production of] auto parts, to the security at the border and environmental issues,” Shannon O’Neil, a Latin American expert at the Council on Foreign Relations, told Newsweek.

Despite Mexicans’ negative regard for U.S. policies, a third of them would move to America if given the chance, a number that has steadily increased since the Pew Research began measuring in 2009, the poll said.

Mexicans are not the only people viewing the U.S. through a different lens now that Trump is president. Another Pew poll released last June found that Trump’s policies were unpopular across 37 countries. Seventy-one percent did not approve of U.S. stance on international climate change agreements and 62 percent unfavorably viewed Trump’s proposed ban on immigration from several Muslim-majority nations. Only 22 percent had confidence Trump would do a good job in the realms of global policy, compared to a 64-percent rating on foreign affairs during the final years of President Barack Obama’s administration.

Trump was also hated on a personal level, with 75 percent viewing him as arrogant, and 65 percent finding him intolerant in the June study. However, 55 percent saw him as a strong leader and 39 percent as charismatic.

By Robert Valencia for Newsweek