Deportations blamed for Mexicans’ negative views of US: survey

A recent survey of Mexicans’ opinions found a significant jump in the percentage holding a “very unfavorable” opinion of the United States – from six percent in 2015 to 42 percent this year – and also a decline in Mexicans’ willingness to move illegally to the U.S. to look for work.

Immigration advocates and experts attribute a shift to President Trump’s rhetoric, his threat to pull out of NAFTA, and an increase in immigrant deportations.

The Pew Research Center’s survey, conducted last spring, found 65 percent of Mexicans have a negative view of the U.S., more than double what it was two years ago when 29 percent expressed a negative view.

“More Mexicans view the United States unfavorably than at any time in the past decade and a half,” the center said.

Opinions of the U.S. appear to have flipped 180 degrees from a majority positive view in 2015, when 66 percent of those surveyed expressed a favorable view of the U.S. 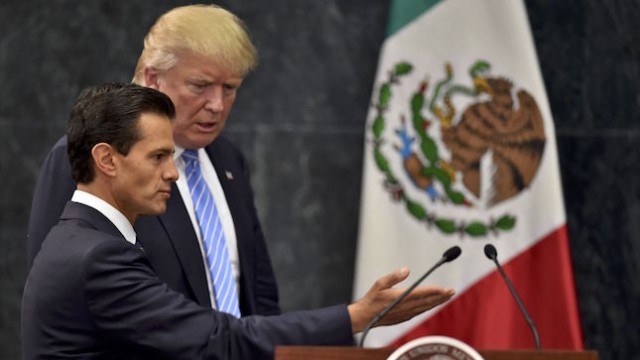 The survey also found a seven percent drop in Mexicans willing to move to the U.S. without authorization to find work.

“Mexicans express less of a willingness to live and work in the U.S. without authorization than they did in 2015, with only 13 percent saying that they would do so, down from 20 percent two years ago.”

Mexicans’ perception of the economic relationship between the two nations has also suffered.

According to the survey, 55 percent view economic ties between the two countries as being “good” for Mexico, a drop from 70 percent in 2013.

Moreover, only five percent of Mexicans trust Trump to “do the right thing,” the lowest rating of his leadership among the 37 countries surveyed by Pew Research.

Enrique Morales, founder of Border Angels and an advocate for immigrants and Latino issues in the U.S., blamed the sharp increase in Mexicans’ negative opinion of the US on what he called Trump’s “hate speech.”

“He started his campaign for the presidency calling Mexicans criminals and rapists. People heard that,” Morales told CNSNews.com