Cancun’s ‘mean streets’: Where are they located?

The northwest of the city is where police receive the most criminal reports….

CANCÚN — Of the 13 sectors in which Cancun has been divided, now reduced to seven, sector six is ​​the most dangerous.

According to the sectorized map presented by State Secretary of Public Security Rodolfo del Angel Campos to the local Congress in Cancún, the city is divided into seven sections. The sectors considered most violent, after six, are sectors four and three.

The northwest of the city is where the most criminal reports are received by police. According to official data, up to 10 to 15 reports arrive for administrative and various misconduct crimes. 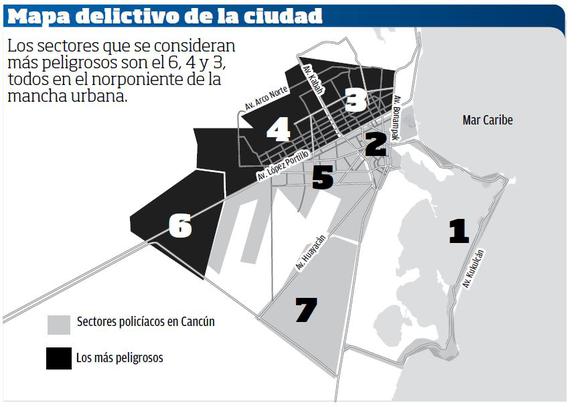 The State Public Safety map places the northwest suburbs of the city, including Villas Otoch Paraiso, Las Palmas and Paseos del Mar, among the most conflictive.

The function of this map, according to Police Chief Del Angel Campos, is a security strategy among law enforcement agencies to determine how much staff, units, and equipment they need in each
sector.

The head of the State Police told the lawmakers that with the map they could have a better panorama of the gaps and needs in law enforcement. However, the signing of the collaboration agreement between the state and municipal police has not worked, because both are governed by
different sectorized maps: the municipal has three sectors, and the state, seven.

In the case of Municipal Public Security, it had previously divided the city into 13 sectors, but with arrival of the current administration these were reduced to seven, and subsequently, three.

The reality is that, although each police corporation has its own sectorized map, the northwest of the city is the most unsafe and violent of the municipality, mainly the area known as Villas Otoch
Paradise, since that place is where most crimes are committed.