Officials ignored contractor’s warnings about highway that collapsed at Cuernavaca

At least 9 months before the fatal incident in the Cuernavaca – Paso Express, which caused two deaths on July 12, it has been said that the Ministry of Communications and Transport (Secretaría de Comunicaciones y Transportes: SCT) ignored the consruction company’s request to fix that stretch.

According to diario REFORMA, the SCT received two requirements to urgently repair the drainage on kilometer 93 of the Paso Express and in the surrounding area where there was a large accumulation of water.

From September 29, 2016, the construction consortium made up of Epccor and Aldesem proposed to strengthen the drainage pipe with a metal cladding and cement; at the same time, they strongly suggested to perform a drilling to remove the water that was accumulating at that point.

This proposal was made as an alternative to a greater construction work offered by the company to repair the Paso Express, but the SCT rejected it, since that would imply stopping traffic on the highway.

“Because the extension of the mentioned work implied to carry out 12 meter deep excavations on the highway, situation that would’ve affected the circulation when having to reduce it to a single lane, we suggested a metal cladding with a cement grout to fill the space between the metal tube and the existing tube in order to make an extension”, says the official communiqué signed by David Rodríguez, Superintendent of works of the consortium.

The document was sent to Josué Robles Rodríguez, of the Federal Roads Center a the SCT Morelos.

“It is necessary to increase the cost of the work. It is pending whether to perform a drilling to remove the water that accumulates to one side of the structure,” the document said clearly.

Along with the letter, the consortium attached a CD and an image that explained the metal cladding proposed for the work at kilometer 93 + 857.

The SCT did not respond to this letter.

A month later, the Deputy Executive Secretary of the State Water Commission of Morelos, Juan Anguiano, presented the results of a hydrological study at kilometer 93 of the Paso Express, where he suggested replacing the pipe with one of twice the diameter of the existing one to improve the drainage; or open a sewer and create a slope in order to drain the water accumulating there.

In the letter dated October 31, 2016 and addressed to the SCT delegate, José Luis Alarcón, the State Water Commission official warned that Chipitlán residents were asking to expand the gutter of the ravine that crossed the drainage where black and rainwater drain.

The SCT never responded to the residents’ demand either; and we all know the outcome of this story. 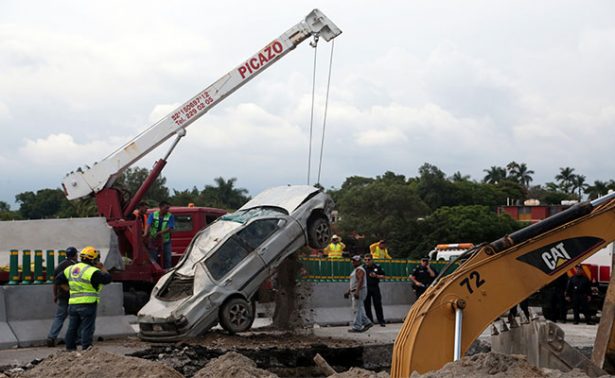