Canada vs Mexico: Trump seeks to divide and conquer in Nafta negotiations

The rhetoric against a neighbouring country dominated Donald Trump’s presidential campaign: a billion-dollar wall, a crackdown on immigration, and a steep border tax. Yet when Trump fired the opening shot in his trade war, it was aimed not at Mexico – but at Canada.

First came an average 20% tariff on Canadian softwood lumber. Months later the Trump administration piled another tariff of nearly 7% on the sector.

Trump launched a broad attack on several sectors north of the border. “Canada, what they’ve done to our dairy farmworkers is a disgrace,” he told reporters. “We can’t let Canada or anybody else take advantage and do what they did to our workers and to our farmers … included in there is lumber, timber and energy. So we’re going to have to get to the negotiating table with Canada very, very quickly.” 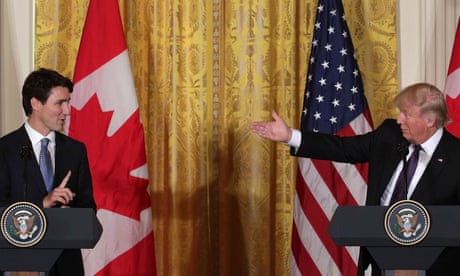 The sharp reversal – a few months earlier Trump had characterised the US-Canada relationship as “outstanding” – came as a surprise to many.

“Step aside, China and Mexico: Canada is now Donald Trump’s whipping-boy du jour on trade,” said the Canadian Press, while Politico offered their thoughts on why president had not gone after Mexico first: “Canada is an easy target and doesn’t have as many weapons to fight back.”

Others said it was long overdue. “Canada was getting a free ride,” said Federico Estévez, a professor at the Autonomous Technological Institute of Mexico. “All of the fire was headed south of the US border – so Canada was getting off easy.”