Whatever happened to July 4th party in Merida?

The U.S. Consulate General in Merida and the Merida English Library have cancelled a much-anticipated July 4th Indepedence Day celebration that had originally been scheduled for July 8. The date for the RSVP-only event was subsequently moved to July 29, but on July 15 the party’s two sponsors distributed the following email notifying that the party was cancelled altogether:

“First of all, thank you for your interest in attending the Merida English Library/U.S. Consulate summer party. We hate to write to you again with another change, but unfortunately we have to cancel the Independence and Community celebration that had been postponed for the 29th of July. Many of our vendors were unavailable for the new date and we aren’t able to pull something else together in the time we have.

“While we are disappointed (and embarrassed) to pull the plug on this event so late in the game, we are grateful for your understanding. We wanted to throw a great party for our wonderful community, but we couldn’t make it happen this time. We hope to plan something in the near future, so please stay in touch by following the library and the Consulate on Facebook and joining the Merida English Library email list.

“Thank you again for your patience and flexibility. We wish you a happy and relaxing summer!” 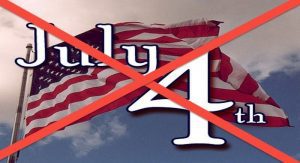