BACKYARD BIRDING IN MERIDA, YUCATAN AND BEYOND – MUD-DWELLING HIBERNATORS? SNIPE? NO, TREE SWALLOWS 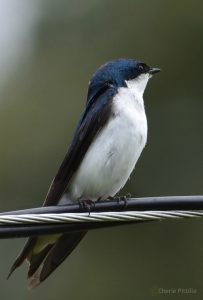 Near Isla Arena in March, hundreds of aerialist foodies feasted on flying insects. Those migrating Tree Swallows looked like an avalanche of acrobats twisting, turning, sailing, and swooping to catch their meals. Some rested temporarily on utility lines until their fast food prey lured them back into the fray. About a century ago they would have perched on telegraph wires during their travels. 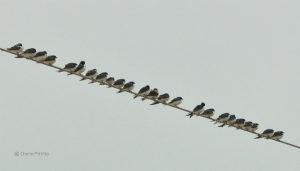 Although this species looks like its smaller cousin in the Yucatan, the Mangrove Swallow, it lacks the white rump of the mangrove. Adult males sport a blue-green iridescence on their backs and heads with white fronts. During the fall, the males appear more greenish. 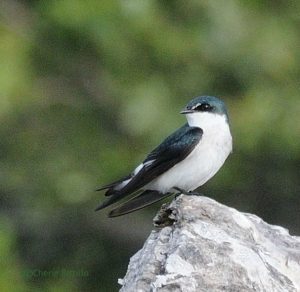 Meanwhile females wear a brown overcoat with a white chef’s apron. But unlike most female birds, the female back plumage grows darker in her second breeding season with more iridescence. In her third breeding season her blue-green plumage looks similar to the male. 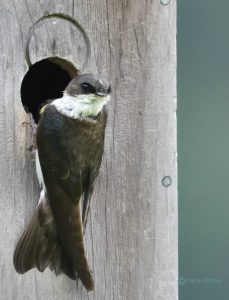 Tree Swallows are the first swallow species to migrate north from Central America and the last to migrate in the fall. Large flocks can be observed along the Yucatecan coast especially in October and April. Although many are winter transients through the Yucatan, a small winter population exists. Some migrate as far as Panama and the West Indies.

Although Tree Swallows eat mostly insects, they also dine on crustaceans, seeds and berries. This varied diet enables them to tolerate cold snaps during migration. They are also one of the few species that can digest wax in wax-myrtle/bayberries (Myrica sp) which are found near waterways. At one time, people who lived near swamps, bogs, or the coast believed Tree Swallows buried in mud to hibernate during winter. Actually the flocks were feeding on those berries to and from migration.

Where do the birds live the rest of the year? Tree Swallows breed in Canada, Alaska and down to the southern US. Living in open fields, meadows, and coastal areas, they used to use tree holes made by woodpeckers, but now readily adapt to bird houses or tree cavities when found. 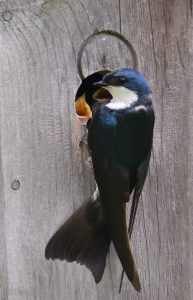 PHOTO Tree Swallows compete for nest boxes with bluebirds, English Sparrows, and others

This spring a pair of Tree Swallows nested in a former bluebird nest box at my North Carolina home. This female mainly built a cup-shaped nest with pine needles and a few weed stalks. She lined it with feathers from Blue Jays, Mallards, swallows, and others. Often one bird may fly with feather, drop it, and another may snatch it in mid-air. This “catch and release play” may serve as a territorial signal to mark the nest site.

During incubation, the female seemed to call the male to come “house sit” while she caught flying insects. He didn’t appear to sit on the eggs but to hang his head out of the nest box, search for her and call her. Her feeding trips were short-lived. Many times he sat on a power line, preened, rested, or went on his foraging mission. Sometimes he flew out of the nest box, sat on the power line and called her, maybe to return? Would that be considered guarding the nest? 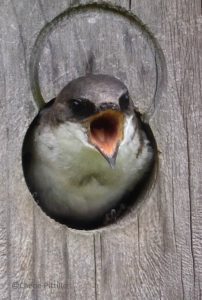 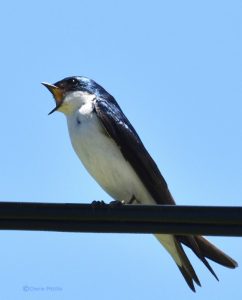 After hatching, I saw the female carrying out fecal sacs from the young chicks, aka disposable diapers, one at a time. I never saw the male do this, but I didn’t constantly watch them. Also, three chicks’ heads finally appeared at the “doorway”. Yes, they are “a-door-able.” 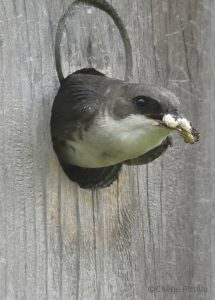 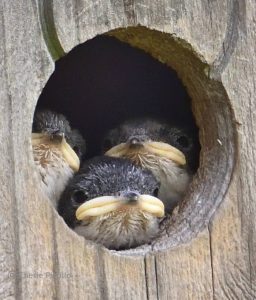 Both parents fed the chicks but one study indicates the female makes more trips to catch prey for her brood. Recent research indicates an average Tree Swallow family can ingest 300,000 insects in about 45 days. Sometimes the parents feed single insects or they can pack several insects into a BB-sized ball in their mouths to feed the chicks.

As the young grew, one or two would would look out their nest box hole and open their mouths anytime any bird flew by. With time they grew more selective to recognize their parents but they also became more vocal and what seemed to me more demanding even after just being fed! 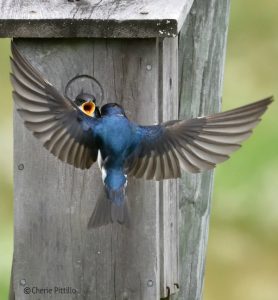 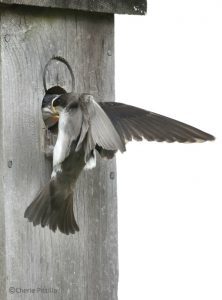 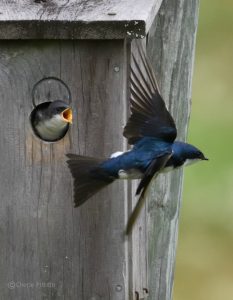 Have you wondered why I included SNIPE in the title? The reason may be hard to “swallow.” A lovely gift to me of an 1897 reference bird book provided the answer. The author wrote how “thousands of Tree Swallows were shot in Long Island marshes  and served as ‘SNIPE’ to New York epicures. (An epicure is a gourmet but a gourmand connotes a greedy gut which I’d call an epicure in this case). That made me epic-curious about Tree Swallows and now you know too.

BE GLAD TREE SWALLOWS ARE EPICURES OF INSECTS!

DISCLAIMER: References do not agree on details about this species. Sal a Pajarear Yucatan (Guia de Aves), A Guide to the Birds of Mexico and Northern Central America, Birds & Reserves of the Yucatan Peninsula, The Bird Book (1897), Birds of North America, Life Histories of North American Flycatchers, Larks, Swallows, and Their Allies

Sibley Guide to Bird Life and Behavior, Lives of N American Birds, A Guide to the Birds of Costa Rica, http://www.hbw.com/species/tree-swallow-tachycineta-bicolor,

Article and photos by Cherie Pittillo for TYT

9 Reactions on this Article