By Yucatan Times on July 27, 2017
Left-wing Morena continues to battle for lead as party of choice for president, according to Reforma newspaper poll in mid-July….
With just a year to go until the election that will decide President Enrique Peña Nieto’s successor, things are not looking good for the ruling Institutional Revolutionary Party (PRI): 80% of those polled in a new survey said it was time for a different party to govern Mexico.

The national poll in mid-July by the Reforma newspaper group found that the party most likely to take the nation’s reins is the leftist National Regeneration Movement known as Morena, led by candidate Andrés Manuel López Obrador. 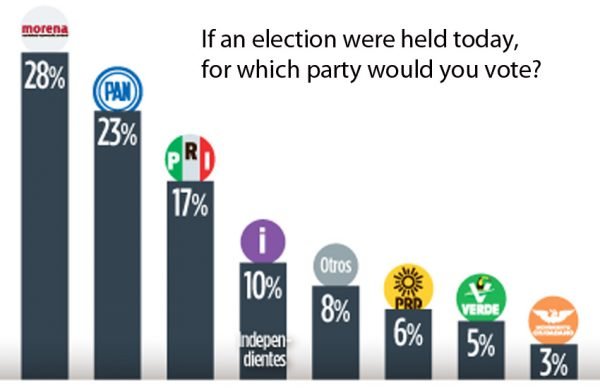 If an election were held now, the poll found, it would be third time lucky for the Tabasco-born firebrand and the man widely known by his initials AMLO would become Mexico’s new president.

Reforma surveyed 1,200 Mexican adults by telephone between July 13 and 16.

In Mexico’s electoral system, where there is no second-round run-off, that would mean López Obrador would become Mexico’s new president.

PAN has provided two recent presidents. Vicente Fox broke a 71-year stranglehold on power by the PRI in 2000 and ruled until 2006.  His successor, Felipe Calderón, was in power from 2006 to 2012.

The incumbent PRI came in third with 17% while unnamed independent candidates garnered 10% support among those surveyed.

The Democratic Revolution Party (PRD) that López Obrador led in the last two presidential elections languished well behind with just 6% of respondents saying it would be their party of choice.