Most dangerous countries for American tourists

Business Insider decided to investigate what are the most dangerous countries for American to visit as measured by the U.S. State Department warnings and also by actual deaths. They used data from Priceonomics customer data.world, a platform that ties many different data sets together so it’s easy to analyze them (you can download their dataset here). 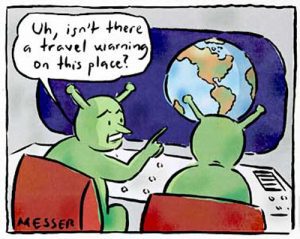 Business Insider found that Mexico, Mali, and Israel have been targeted by the most travel advisories in recent years, but that Americans are more likely to face life-threatening danger in Thailand, Pakistan, and Honduras.

Indeed, warnings and deadly violence are correlated on the whole. And fortunately, some travelers – at least those headed to the Philippines or Egypt – seem to heed these advisories, as those countries see dropoffs in tourism following warnings.

Of course, Mexico ranks because vastly more Americans travel to Mexico than any other country. This holds true to a lesser degree for some of the other countries near the top of this rankings, including the Dominican Republic and Jamaica.

With that in mind, Business Insider adjusted their ranking to account for the volume of tourism from the U.S. They calculated the number of Americans murdered in a country per 100,000 American tourists, using travel numbers from a dataset gathered by the Bureau of Transportation Statistics, and excluded any country that received fewer than 100,000 American visitors between 2009 and 2016.