(Organizers of a Merida event in favor of impeachment of U.S. President Donald Trump submitted the following press release to The Yucatan Times.)

“A group of concerned U.S. citizens are holding an Impeachment event at Hennessy´s Irish Pub on Paseo Montejo on July 2 from noon to 2:00 pm.  All concerned Americans and dual citizens are urged to come join the growing chorus calling for Impeachment proceedings to begin.

“Petitions will be available to sign which will then be delivered to the U.S. House of Representatives. All citizens of the U.S., even dual citizens, can sign the petition.  Even people who have not lived in the U.S. for many years and do not have an official U.S. address can sign the petition. The only information required is your name, email, state  and the zip code of the last place you lived or voted in. 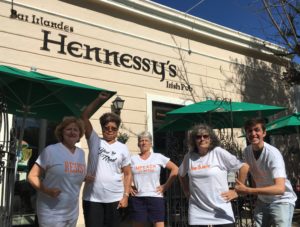 “There will also be Voter Registration forms and contact information for people who may need more assistance in registering to vote.

“To draw attention to the cause, organizers are inviting people to gather in front of Hennessy´s for a Silent Strike a Pose Flash Mob at 12:20 for ten minutes.  No signs allowed, but wear your thoughts on your shirts. Face the street in silence and let your shirts do the talking.  Have teeshirts made with: Resist, Impeach, You’re fired, Orange Lies Matter!  Or wear a banner with your thoughts. Photos will be shared on social media.

“For more information including where to obtain teeshirts, please visit https://www.facebook.com/events/117718192060955/?active_tab=about.”