VERACRUZ — Mexican police found on Friday May 26 the decapitated bodies of five people, apparently with signs of torture in the Gulf Coast state of Veracruz, which has long been ravaged by drug smugglers and human traffickers.

“The investigation shows that the victims are male and our work continues to identify them,” the state attorney general’s office said in a statement without providing further details. 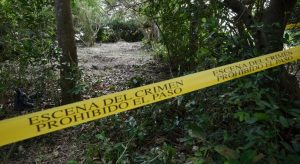 A photo of the crime scene where the bodies were dumped in the township of Juan Rodriguez Clara in southern Veracruz, seen by Reuters, shows the bloodied bodies piled in an empty field. There was a letter next to the bodies, which local media said was authored by the Jalisco New Generation Cartel

Home to Mexico’s main Atlantic port, Veracruz suffered a surge in violence in 2016, with murders leaping by 123 percent to 1,258 from the previous year, official data showed.

Veracruz former Governor Javier Duarte was arrested in Guatemala in April and faces prosecution for embezzlement and organized crime in Mexico.