CAMPECHE — The 90th National Golf Championship of Amateurs 2017, that will have as its headquarters at the city of San Francisco of Campeche,  will be held from June 7 to 11.  Jorge Manos Esparragoza, head of the Ministry of Tourism of the Campeche State Government (SECTUR), in coordination with the Mexican Golf Federation, made the annoucement. 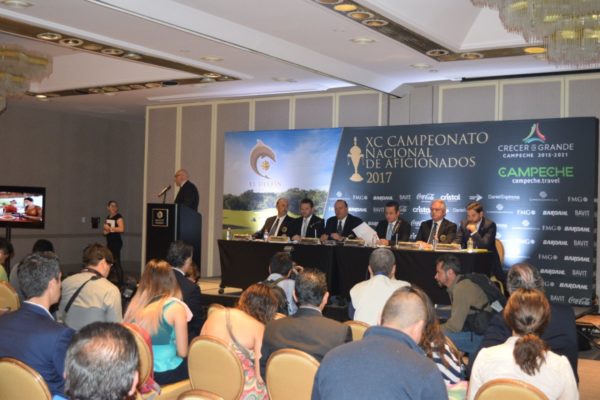 With representatives of the media in Mexico City, the head of the SECTUR said that this event will have the participation of more than one hundred players and that for the second time will have as its headquarters the spectacular golf course “El Delfin” in the Campeche Country Club, which will host the most important amateur golf tournament in Mexico and one of the best in Latin America.

“The field will be comprised of amateur players with a maximum handicap of 2.9 and 15 countries will be represented, including Mexico,” he said.

“For the city of San Francisco de Campeche, Cultural Heritage of Humanity, hosting this important championship and hosting more than 100 young golfers from different countries, represents a great honor for the trust deposited by the Mexican Golf Federation, AC., and thanks to the support of Governor Alejandro Moreno Cárdenas, who have made it possible. We are sure that in the magnificent facilities of the Campeche Country Club, they will have a successful event, in a first level scenario,” he said.

He also remarked that the economic spurt expected for the state is about five million pesos for this event, in which for almost a week golfers, their companions and visitors, will enjoy the competition but also have the opportunity to know the tourist and cultural offer of Campeche.

Finally, the state official commented that “these international sporting events puts Campeche in the eyes of the tourism and business world, as having excellent golf courses to offer, positions the state as a good destination for sport tourism.”