With 33 exhibitors, the first edition of the Yucatan International Expo just wrapped up.

HOUSTON — An unprecedented stage in the commercial life of the peninsula was marked last week, with the first edition of the Yucatan International Expo, which offered a wide variety of products in search of new markets, in this Houston area where 45 percent of the population is Latino.

It also served to promote local inputs and business appointments with distributors and members of American chains. Experts in the field trained representatives of Yucatecan companies on how to do business in the United States, said the president of the Chamber of Latino Entrepreneurs and promoter of the meeting, Adriana Elizabeth Gonzalez. 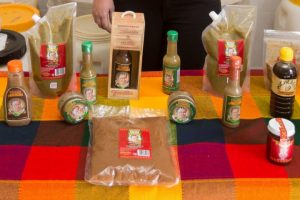 The event started with the presence of Governor Rolando Zapata Bello and concluded Friday April 28, in the building of said group, where is expected the sample of local industries, with products such as pork, sauces, henequen drinks, coconut , Horchata, hammocks and the coveted honey of this region.

This first meeting of Yucatecan merchants and producers with their American counterparts was promoted by the Produce Foundation, the State Government through the Ministry of Rural Development (Seder) and the Chamber, which proudly carries the motto “everything we promote and we do is in Spanish. ”

It should be noted that the exhibitors offered their products and articles in the framework of a gastronomic sample with typical dishes. Admission was free with a good influx of Americans, Hispanics and the Yucatecan community based in Texas.

Carlos Recio Mendicuti, president of the Produce Foundation, Pedro Cabrera Quijano, emphasized the boost offered by the Yucatan Exporta office in Houston, which is about to complete its first year, and said that this activity is expected to increase binational trade relations.