BoF (The Business of Fashion) Professional is one of the most prestigious resources for fashion creatives, executives and entrepreneurs in over 200 countries. It is frequently described as “indispensable,” “required reading” and “an addiction magazine.” Recently they published an article titled “Mexico’s Luxury Market Might Actually Benefit From Trump“. Check it out!

Wall or no wall, Mexico’s luxury market is thriving with a little unexpected help from the country’s arch nemesis: the President of the United States. But there’s still cause for concern.

MEXICO CITY, Mexico — “Mexico is the shit.” The slogan about sums up current sentiment toward the North American country, which has attracted quite a swell of support since United States President Donald J. Trump first suggested a wall be built along the border of the two nations. And with the threat of punitive US tariffs on imports from the country — which Trump claims will pay for the border wall — pro-Mexico sentiment has only grown.

Whether or not any of Trump’s proposed trade policies will actually be enacted remains to be seen, but their mere specter has already spurred mass outrage. Mexico City-based designer Anuar Layón’s “MEXICO IS THE SHIT” slogan, which he originally etched into a varsity jacket as a gesture of playful patriotism, has become an anti-Trump signifier, spotted on the backs of scenesters from Mexico City to New York City. 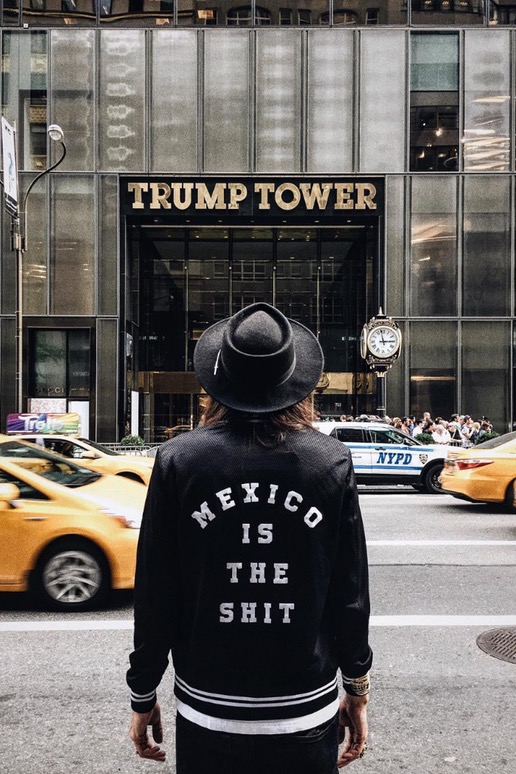 “The first days after the election, the environment was nervous and indignant, but it has given Mexicans a more patriotic feeling — and the strength to begin to support and elevate the things that are happening in Mexico so that, little by little, we are able to stop depending on the United States and we can start to change the stereotype that we have, as country and as a people — talented and creative people,” says Layón, who created the line for Mercadorama, which sells limited-edition music merchandise designed by an associated collective of street artists.

“On social media, after Trump started verbally attacking Mexico, many people looked for something that could represent them and could give them a voice,” he adds. “That’s how, without expecting it, people started to use ‘Mexico is the Shit’ as a way to show that they did not agree with everything Trump was saying about us.”

The movement is socio-political, but also underscores just how “cool” Mexico is right now, with tourists generating a total economic impact of $19.6 billion in 2016, a 10 percent jump from 2015 and a 54 percent increase from 2012, according to MSLGroup for The Mexican Tourism Board.