Andrea Aguilar is an American expat in Merida. She is sharing her experiences in a regular column for TYT. Here is Andrea’s latest post.

If you are looking for an English-speaking Easter service, visit Calvary Centro on Sunday!

Shortly after landing in Merida, I discovered a Calvary Chapel while passing through Santiago Park. Since my Spanish is far from fluent, I was thrilled to learn they offered a worship service in English! For those not familiar, Calvary Chapel is a non-denominational Christian church that is all around the world.

In 1965, Pastor Chuck Smith began his ministry at Calvary Chapel Costa Mesa with just twenty-five people. At a pivotal time in history, Pastor Chuck welcomed all, young and old, without judgment, into the local church. With a sincere concern for the lost, Pastor Chuck and Kay Smith made room in the church and their home for a generation of hippies and surfers, serving in the midst of a powerful movement of the Holy Spirit that spread from the West Coast to the East Coast and throughout the world. In his ministry, he emphasized the teaching of the Word of God. In the wake of that move of the Holy Spirit, what began as a small local church grew into an international family of over 1700 churches around the world. Pastor Chuck’s simple, yet sound, expositional approach to teaching the Bible has helped millions better understand God’s Word.

Calvary Centro was established for many reasons. The first was that Pastor Robert kept getting e-mails from people moving to Merida, or already living in the area and looking for a church service in English. Another reason was a connection to the downtown, or heart of Merida. He had visited a church in the heart of the city of Budapest, Hungary that was in an old movie theater, and realized that it would great to have a church in the downtown area of Merida. Upon returning to Merida and searching for a place downtown, they found a closed down bakery in a great location at Santiago Park and began working on the site in April 2015. The first service was held May 24th, 2015, and this May they will be celebrating their two- year anniversary.

The church has both English and Spanish congregations. The Spanish one has grown rapidly and the English a little slower. The English speaking community and visitors to Merida tend to hear about it by word-of-mouth, or ads in local publications.

The service begins in a time of worship with contemporary praise music. The youth lead using their gifts of beautiful voices (and hearts) accompanied by guitar, electronic drums, and sometimes piano. Following is a short time of greeting one another, and the sermon which we typically study through an entire book of the Bible in portions, week-by-week (currently the Gospel of John). The service is 75-90 minutes.

This Calvary Chapel is one more of my favorite things that I love and appreciate about living in Merida. If you are looking for an English-speaking faith community, you will be welcomed at Calvary Centro.

By Andrea Aguilar for TYT 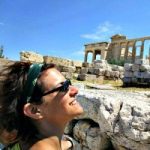 Andrea Aguilar is an American expat. She spent a year traveling the world with her husband while they searched for a new community to call home after having lived in San Francisco for 20 years. Her interests typically include yoga, writing, reading, and once she leaves the house, discovering a new adventure.  Follow more of Andrea’s adventures on her blog andrea*poem, or Instagram (andreapoem).