For a while I’ve been asking myself how it’s possible that I keep finding new natural wonders to write about after 25 years of living near Guadalajara. So, one day I sat down with a map and drew a circle around the city, with a radius of around 250 kilometers, nicely encompassing the places a citizen of Guadalajara could conveniently drive to in one day.

As I looked over what was included in that circle, I realized it was filled with attractive, picturesque, exciting, charming, even amazing sites. There was Lake Chapala, biggest lake in the country, the Primavera pine and oak forest, the live and fiery Volcán de Fuego, the white sand beaches of the Pacific Coast, huge, deep canyons carved by the Santiago River, limestone mountains supporting incredibly rich cloud forests like El Cerro de Manantlán, the mangrove swamps and rivers of San Blas, teaming with bird and animal life, and much, much more.

Of course, to some extent, this variety can be attributed to altitude, which ranges from the height of snow-covered Nevado de Colima (4240 meters, 13,911 feet) to sea level on the Pacific coast. But is this diversity of eco-systems due only to altitude? 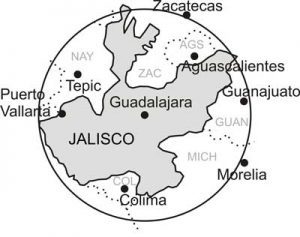 By good luck, I happened to receive a copy of just the book that could answer this question. I’m referring to Geo-Mexico, by Richard Rhoda and Tony Burton. This is a geography book, but far more interesting than the sort I had to deal with as a schoolboy. It focuses on the interaction between people and the physical environment and is chock full of fascinating facts. For example, did you know that Mexico has more species of pine trees than any other country? That it has the world’s richest assortment of cacti (over 900 species)? That Mexico’s diverse economy produces about $1.6 trillion in goods and services every year, more than Canada or South Korea? That Mexico’s population of 110 million makes it the eleventh largest nation on earth? That migrant workers in the USA sent $25 billion (yes, billion!) back to their families in Mexico in 2008?

But I digress. This book also made it possible for me to test my theory that the circle I had drawn around Guadalajara is something special. Chapter 5 of Geo-Mexico is devoted to ecosystems and biodiversity. It divides all of Mexico into five natural ecosystems:

►Arid scrublands (as in the cactus-rich Sonoran desert_)

►Tropical deciduous forests (like the thorn forests of Sinaloa)

►Grasslands (from Ciudad Juarez to Aguascalientes)

►Temperate forests (the oaks, pines and firs of Mexico’s mountains)

To my surprise and delight, I discovered that there is only one place in the entire country where all five ecosystems are found in close proximity and that is inside of what I have now decided to call The Magic Circle. In addition to this, according to Rhoda and Burton, the line designating the major Faunistic Divide of Mexico, (creatures of the north and creatures of the south) just happens to run right through that same Magic Circle. This is shown as a dotted red line on the map above.