This may comes as a surprise to anyone not following Mexico closely. The country’s benchmark stock-market index, the IPC, hit a new all-time high on Tuesday March 21, writes Ian Bezek on seekingalpha.com.

The previous record was set last August at 48,600. Tuesday, the IPC briefly topped 49,000 before moving back down with the rest of the globe’s markets.

It’s easy to get caught up in the heat of the moment. As recently as January, we were hearing from all sides that Mexico was heading for huge troubles following Trump’s election. The peso plunged, Mexico’s president appeared impotent, less-than-peaceful protests broke out across Mexico and the mood fell into despondency.

At that point, many investors surely pulled the plug on Mexico. It took a major flow of money to drop the peso 15% so quickly from November on into January, after all. Which institutional investor is going to admit that they got caught long Mexico into the election and held on as it continued to apparently sink endlessly into January? This is the sort of situation that creates forced sellers, irrational thinking, and huge opportunities for those that remain calm.

All the more so in the case of Mexico, since the economy has been quietly humming along for years now and its stock market has gone with it. Mexico largely sidestepped the Latin American slowdown that’s been hitting the region since 2012. In fact, Mexico’s markets hit new records last August and have stayed technically in a bull market, only dropping 10% following Trump’s victory. Here’s the context you probably didn’t see on CNBC: 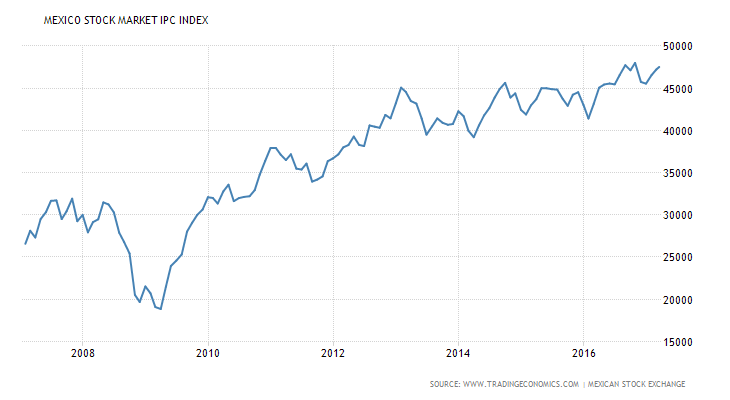 That little wiggle over on the right was the Trump effect. Doesn’t look so bad when you take a look at the broader picture.