In 1846, the Irish fought for Mexico in the name of St. Patrick

Most Americans know today is St. Patrick’s Day. But some might also share Mexico’s celebration, honoring a few Irish immigrants who deserted the U.S. Army in 1846 and instead fought for Mexico under Gen. Antonio López de Santa Anna.

In 2003, then-President Vicente Fox described them as a “brave group of Irish soldiers [fighting] the foreign ground invasion” by U.S. forces.

On April 12, 1846, Galway immigrant John Riley of the 5th U.S. Infantry swam the Rio Grande from a fort in Brownsville to Matamoros. Within weeks, more than 40 Irish had joined him to man Mexico’s artillery.

Some accounts say the contingent included Irish Texans who had settled in what is now San Patricio County. But most accounts say the defectors — eventually about 200 — were new U.S. arrivals during Ireland’s Great Famine.

“They were just off the boat from Ireland, and they joined the Army just to feed and clothe themselves,” Haynes said.

In Mexico, they’re honored as martyrs, with monuments to “the San Patricios”.

From Mexico’s point of view, Roman Catholic immigrants from Europe had good reason to help defend a homeland against Protestant attackers.

Or that’s the way the story of St. Patrick’s Battalion was told until recent years. 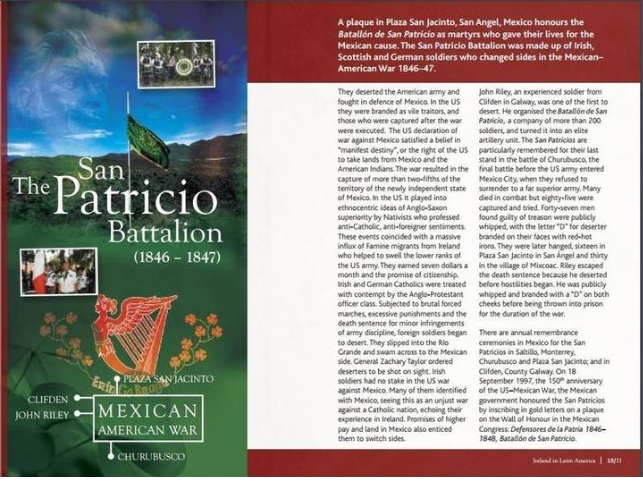