EDITORIAL: Anatomy of a Hater

In our line of work, we often wonder, what can make a person so intolerant and upset with the world or other people? We still haven´t been able to find a proper answer. 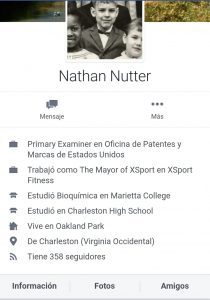 Meet Nathan Nutter. According to his Facebook, he works at the United States Patent and Trademark Office and he is a hater. That is a very strong word and we do not use it lightly.

Mr. Nutter sent The Yucatan Times a message stating his apparent support to either the spring breakers, the idea of 45th president of the United States regarding the construction of the border wall… or both. This is what Mr. Nutter expressed in his message. 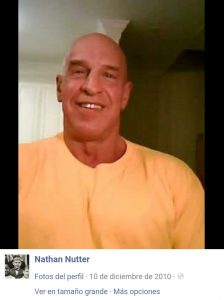 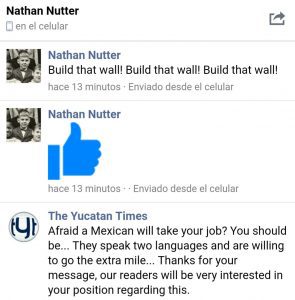 One of our staff members, replied to Mr. Nutter´s message.

“Afraid a Mexican will take your job? You should be… They speak two languages and are willing to go the extra mile… Thanks for your message, our readers will be very interested in your position regarding this”.

Mr. Nutter´s answer was the following:

“No because I speak four languages, with a PhD in chemistry. Dumbasses from Mexico won’t be able to take my job.
No, porque yo hablo cuatro idiomas, con un doctorado en química polymerica. Los idiotas de México no podrán tomar mi trabajo.
Hahahahahaha I will copy this for Facebook as well  Mexico is a trash country, this is why everyone wants to get to America where everything is great. If you Mexicans were so damn hard working maybe you’d have a better country. Ha ha ha ha ha ha ha ha ha ha ha” 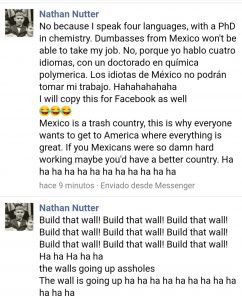 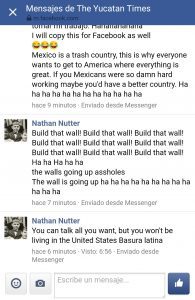 Is it necesary to be this aggressive? This intolerant? To speak and insult someone whom you do not know? A country? A race? In The Yucatan Times we respect all sexual preferences, all religion creeds and denominations, race and gender. Mr. Nutter doesn´t realize perhaps we do not need any permission to live in the United States since many of our editorial contributors currently reside there. We also realize one person’s opiniion does not represent an entire country.

The Yucatan Times is trying to contact the United States Patent and Trademark Office in order to ask them what their position is regarding their employee’s comments. As a U.S. government employee, his prejudices could potentially effect his official duties.

The conversation has also been referred to the Mexican Secretariat of Foreign Affairs for whatever action they consider appropriate.