PRESIDENT Trump was in campaign mode when he told a rally in Orlando that there had just been a terror attack in Sweden. There hadn’t. But there had been a show on TV …

No media or government agency around the world — or Sweden — has reported any incident or attack involving refugees there in recent times.

Now former prime minister of Sweden Carl Bildt has some questions to ask.

“Sweden? Terror attack? What has he been smoking? Questions abound.”

Sweden? Terror attack? What has he been smoking? Questions abound. http://www.huffingtonpost.com/entry/donald-trump-sweden-terror-lie_us_58a8f397e4b045cd34c263d3 …

So where did the US President get the idea from?

As the mediate.com news blog site points out, something along those lines had been on the telly the night before. 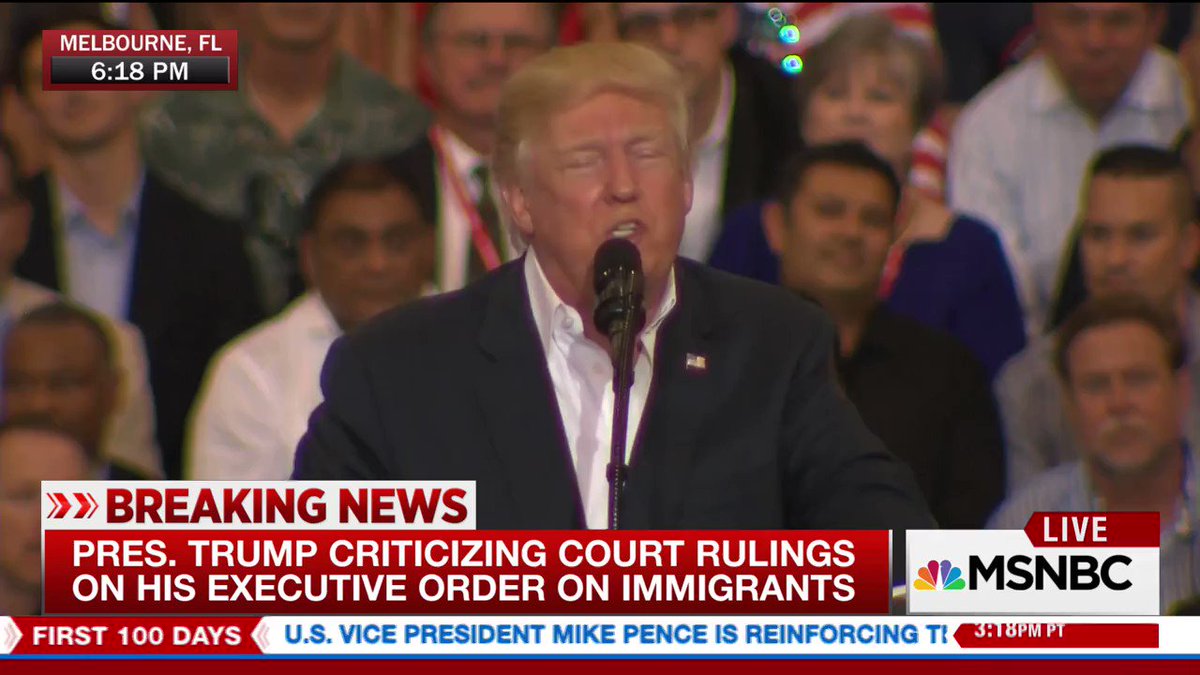 There was NO “incident” in Sweden last night.

The Fox News Tucker Carlson show aired a segment about a documentary maker Ami Horowitz and a film he had made about immigration and Sweden.

His documentary claimed Sweden’s generous immigration policy was linked to a rise in crime, and alleges the government there was attempting to cover-up the link.

It did not detail any specific ‘incident’ happening in Sweden this weekend, or in recent weeks.

It’s not the first time President Trump has acted as though he treats television as though it were his daily intelligence briefing.

In January he launched a twitter tirade against Chicago, threatening to ‘send in the feds’ if it didn’t get tough on crime. He was referencing a Fox News show that aired moments earlier, discussing the gang-related gun-crime and killings in the troubled city.

In December, he tweeted an attack on aircraft manufacturer Boeing over the price for building a new Air Force One an hour or so after a Fox News report claiming the company was about to outsource manufacturing jobs to India.

Supporters of US President Donald Trump listen during the rally in Melbourne, Florida. Picture: AFPSource:AFP

“I’m here because I want to be among my friends and among the people,” Mr Trump told the supportive Orlando crowd. “I also want to speak to you without the filter of the fake news.”

Mr Trump was in his comfort zone surrounded by delirious, flag and placard- waving supporters in a hangar at Florida’s Orlando-Melbourne Airport.

He avoided mentioning Russia and the scandal that led to the firing of his national security adviser General Michael Flynn and while he did not name China, he said his administration was working on a plan to “crackdown on foreign cheating and currency manipulation”.

The president did not hold back at the rally about his apprehension about allowing refugees into the US.

He pointed to troubles Sweden, Germany France and Belgium were having with the large flow of refugees that fled war-torn Syria.

Echoing his Mexico will pay for a US-Mexico border wall pledge, Mr Trump told the crowd he wants safe zones built in Syria for the refugees but Persian Gulf states would pay for them because “they have nothing but money” and the US has a $US20 trillion debt.

“We have allowed thousands and thousands of people into our country and there was no way to vet those people,” Mr Trump said, even though extensive background checks are compulsorily made on all immigrants by US government law enforcement agencies.

“There was no documentation. There was no nothing. So we are going to keep our country safe.”