U.S. President-elect Donald Trump on Thursday targeted Toyota Motor Corp, threatening to impose a hefty fee on the Japanese automaker it if builds its Corolla cars for the U.S. market at a plant in Mexico.

“Toyota Motor said will build a new plant in Baja, Mexico, to build Corolla cars for U.S. NO WAY! Build plant in U.S. or pay big border tax,” Trump said in a post on Twitter.

Toyota, which announced its plan to build the Mexican facility in April 2015, had no immediate comment. 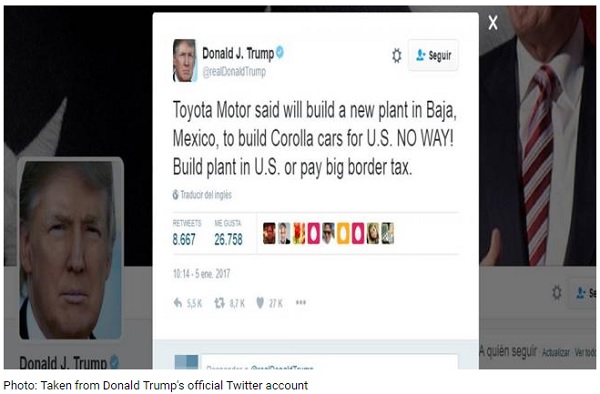 After U.S. President-elect Donald Trump threatened Toyota with a “big border tax” for Corolla’s manufactured in Mexico and exported to the U.S., Toyota has responded by saying that its new plant in Guanajuato will not affect U.S. jobs.

“Production volume or employment in the U.S. will not decrease as a result of our new plant in Guanajuato, Mexico announced in April 2015,” said Toyota in a press statement it shared on its social media.

“Toyota looks forward to collaborate with the Trump Administration in order to serve in the best interests of consumers and the automotive industry,” the statement continued.

Company officials also said that in 2015, it exported over 160 thousand U.S.-made vehicles to 40 different countries, helping make the country one of the biggest exporting countries in the world.

In addition, company officials said that the plant in Baja California was built in 2002 to complement a plant in San Antonio, Texas that employs 3,300 people and made over 230,000 Tundra and Tacoma trucks in 2016.

Toyota Motor Corp. stock is skidding in Tokyo trading after President-elect Donald Trump said on Twitter that the Japanese automaker faces a “big border tax” if it goes ahead with plans on a new Mexico plant.

Toyota in Japan had no further comments beyond what it released in the U.S., which did not directly address Trump’s tweet but stressed that Toyota has been in the U.S. for six decades and that the Mexico plant will not affect jobs or production in the U.S.

Toyota President Akio Toyoda made similar comments Thursday, ahead of the tweet, telling reporters at a New Year’s gathering for auto businesses that Toyota is a “good corporate citizen” and, like Trump, wants to make “America strong.