Pope Francis appeals for support for all scarred by war and terrorism, as other Christian leaders also address tumultuous events of 2016.

The world must harness the power of love rather than might and wealth to bring peace to areas blighted by conflict, Pope Francis has said in his Christmas Day message. In the UK, Christian leaders focused on uncertainty, anxiety and fear at the end of a tumultuous year on the global stage.

In his Christmas Day homily delivered in front of thousands of people from the balcony of St Peter’s Basilica in Rome, the leader of the world’s 1.2 billion Roman Catholics appealed for the message of peace to go out “to the ends of the Earth to reach all peoples, especially those scarred by war and harsh conflicts that seem stronger than the yearning for peace”.

Syria topped the pope’s long checklist of countries that have been plagued by war and suffering over the past year. “Far too much blood has been spilled,” he said.

The pontiff added: “Above all, in the city of Aleppo, site of the most awful battles in recent weeks, it is most urgent that assistance and support be guaranteed to the exhausted civil populace, with respect for humanitarian law. It is time for weapons to be stilled forever, and the international community to actively seek a negotiated solution so that civil coexistence can be restored in the country.” 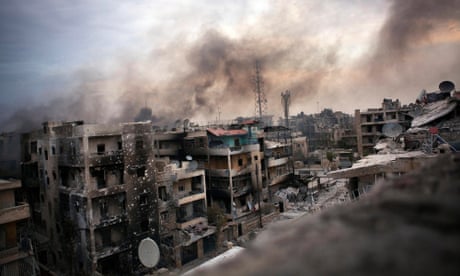 ‘I couldn’t take anything except dignity’: stories of the leaving of Aleppo

He called on Israelis and Palestinians to “have the courage and the determination to write a new page of history, where hate and revenge give way to the will to build together a future of mutual understanding and harmony”.

The pope called for peace, unity and dialogue in Iraq, Libya, Yemen, Nigeria, South Sudan and the Democratic Republic of the Congo. There was an “urgent need to put into practice commitments” made in eastern Ukraine, he added.