Justin Fox is Bloomberg expert view columnist, former editorial director of Harvard Business Review and author for Time, Fortune and American Banker, who also wrote the book “The Myth of the Rational Market. He analyzes the differences between Mexico and China as U.S. trading partners:

With free trade under fire from the incoming administration and under question from many other quarters, it is U.S. trade relations with China and Mexico that have been getting the most attention and criticism. That makes sense, given that those are two of this country’s three biggest trading partners — and the third is Canada, which is hard to get worked up about.

Although China and Mexico both trade a lot with the U.S., and have both been running significant trade surpluses with the U.S. for decades, that’s where the similarity ends. The China-U.S. trade relationship is spectacularly unbalanced, with a gap between goods exports and imports that exploded not long after China joined the World Trade Organization in 2001 and that, while it has subsided a bit since last year, is still of a scale never seen before “Chimerica” came into being. 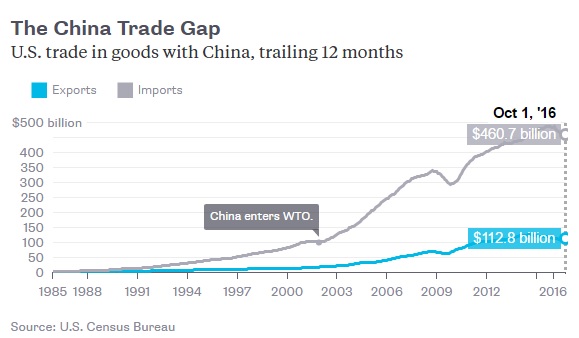 By contrast, the U.S. trade relationship with Mexico is a lot more, well, normal (I’ve rendered it on the same scale as the China chart so they’re easier to compare). 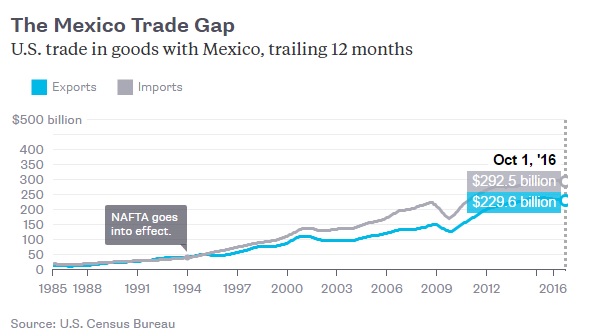 Yes, Mexico has been running a trade surplus with the U.S. since a few months after the North American Free Trade Agreement went into effect in January 1994. But since the late 1990s, growth in U.S. exports to Mexico has kept pace with the growth in imports from Mexico. In fact, the current U.S. trade deficit with Mexico is actually smaller, as a percentage of total trade volume, than it was in the mid-1980s.