WHAT’S BEHIND THE CANVAS? -Marco Zamudio- Portrait of an Artist

The Yucatan Times conducted an exclusive interview with Marco Zamudio, one of Mexico’s most renowned painters, whose just about to inaugurate his exhibition at Merida’s SoHo Galleries on Saaturday November 19. 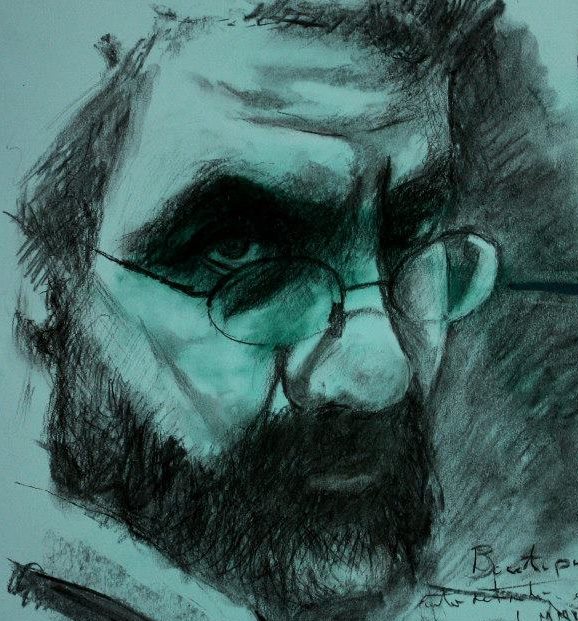 “For me a blank canvas is … an infinite universe of possibilities to be reflected. Behind each image, behind each tone, color or contrast, is always implied an emotion, a feeling, a story. Caresses, elation and sometimes a hidden tear- This is the artist´s response to the first question I asked him. -What is a blank canvas for you? – While we toast and savor an unrestrained drink from our respective glass of wine, kindly provided by our gracious hostess, Aida.

It is a red 70% Carignan, 30% Grenache that recalls with its smell, ripe fruit, spicy, licorice and balsamic with a deep, lingering taste, creating a special, unique environment. This wine is a perfect pairing for the occasion. An explosive duet.

Marco Zamudio, artist, muralist, teacher and wine “Ferrer Bobet”. Carignan and black Grenache grapes. The beverage presents us its color, the quality of its tannins and excellent “blend” product of mixing wines of different characteristics in order to get another with all virtues of those involved in the mix. The same applies to Marco´s work, a “blend of techniques” that gives as result, a delight to our eyes with his work, enormous, vast. 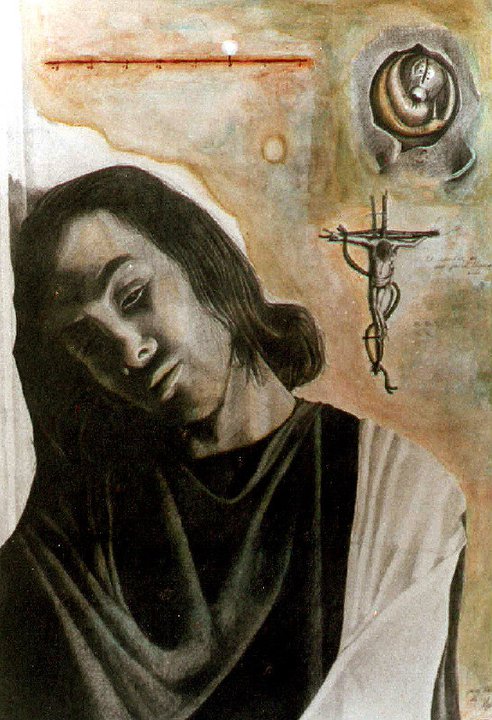 Marco Zamudio is today, one of Mexico´s most renowned artists. His work is called “realistic painting” and it is highly regarded for its ancient techniques linked to drawing, oil painting by glazes on canvas on wood; Renaissance techniques.

He contributed in the exhibition “Visions of America: Urban Realism” at the Museum of Contemporary Art in New York and at the Museum of Modern Art in Mexico City with “Mexico in the 90´s  A Self-Portrait “

In 2006 he won first place in the Sacro Painting contest: “The Gospel according to Luke” organized by the “Manuel Toussaint Institute, Ecumenical Centre for Conservation and Promotion of Artistic Heritage”.

– “Throughout my career I have devoted much time rescuing old techniques which, I feel, are far from being obsolete and have contributed much to art. I am amongst those painters that are working with these techniques, so it is important for me to do a rediscovery or rescue them, but that does not mean that I set aside modern practices.-

TYT (The Yucatan Times) – Who is Marco Zamudio?

MZ (Marco Zamudio) – I was born on Mexico City May 18th, 1973. As a young boy I suffered from severe asthma attacks that marked me deeply since I wanted to be like other children and play football, run, climb trees… everything a kid enjoys, but I was not able to do so. At age 13 due to a severe asthma attack I went into respiratory arrest and died for a few minutes… the doctors revived me. My mom decided to enrolled me into drawing and painting workshops trying till some extent, to replace the physical sports that I could not do and caused in me, hurt and frustration. Gradually I began winning contests, first in the area I lived at, then the city, the state and so on. That is what molded me in those years but also, my father was a professional photographer so my brothers and I since young learned how to handle the lens. For many years I took photographs as a living, but I felt… no, I knew that my vocation was to become a painter.

MZ – No, of course. Reality is that I wanted to be a doctor … I wanted to treat all children with asthma, but I had a great teacher named Jorge Albarrán who helped me unravel what was inside me and that’s how I decided to make a living out of painting, which I have achieved in the last 15 years, when I said goodbye and left behind the other things I made a living out of, that such as photography for events like weddings and graphic design. I feel my work has perfectly embodied the “me”… it’s hard to separate the artist from the man. I’m a guy who through his work has reflected about life and matured as much as I have been able. A life as common as anyone else, except that mine is embodied in a canvas. 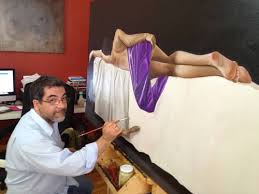 TYT – Tell us about the artist.

MZ – I am of those painters who loves art, color, texture, shape and therefore throughout my career I have devoted myself to rescuing old techniques that mean a lot to me. I consider being of a generation of artists with a certain weariness about “conceptual art” looking for a re-birth of craftmanship and methods. I’m a realist painter of Renaissance techniques, an “old school” illustrator. I am a true believer of the golden point, the baroque chiaroscuro moved to contemporary art, with romantic overtones and strong colors to highlight illuminated figures, always delineated with technical drawing, playing with obscurities. Realism and Romanticism opposed before now are veiled in my work. I adapt to contemporary times, if I didn´t my art would die. I also believe in humility, going to visit the gallery owners and offer my work; it is them and collectors, whom we are in debt to as artists. 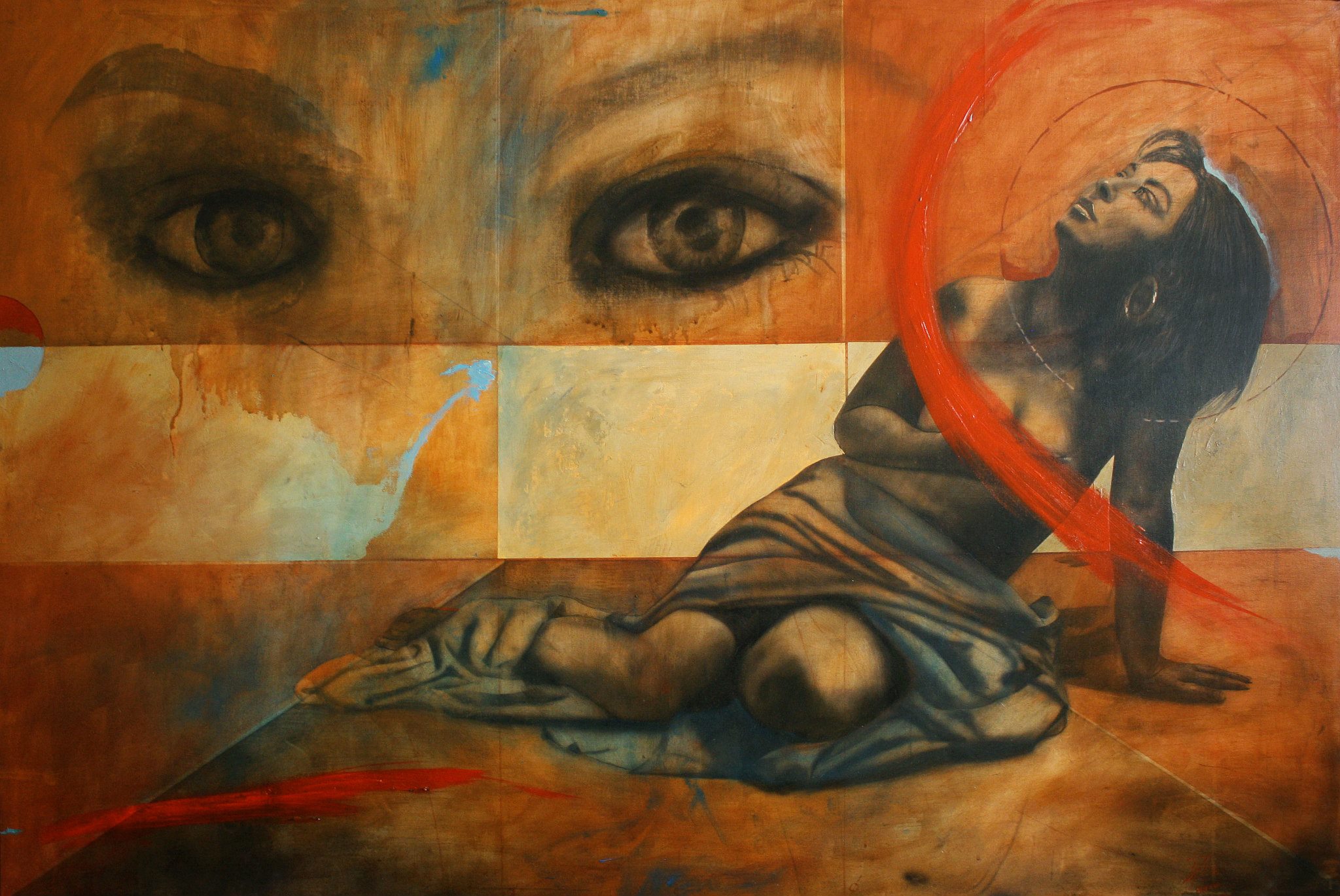 TYT – Marco. Recently you edited a book widely regarded as “magnificent” and has been welcomed with open arms, both by those who know your work as well as those who had no idea who you are. Tell us what motivated the publication of this. 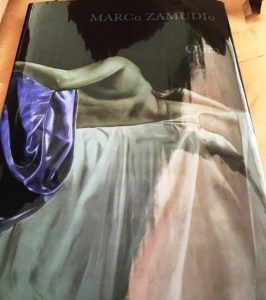 MZ – This is an edition of a thousand copies of 172 pages each; It is made with traditional techniques, handsewn, making each volume collectible. I could have made a digital catalog, but making this book is a way, to some extent, to be classic, like when I paint, because of my work with ancient techniques. The publication of this book was expensive, since it is an independent work, financed by close friends and collectors. This book makes me reflect on more than two decades I’ve been betting on my work, a race of endurance and strength that I do not know where it will take me, but I’m certain of what I want to achieve in the near future. 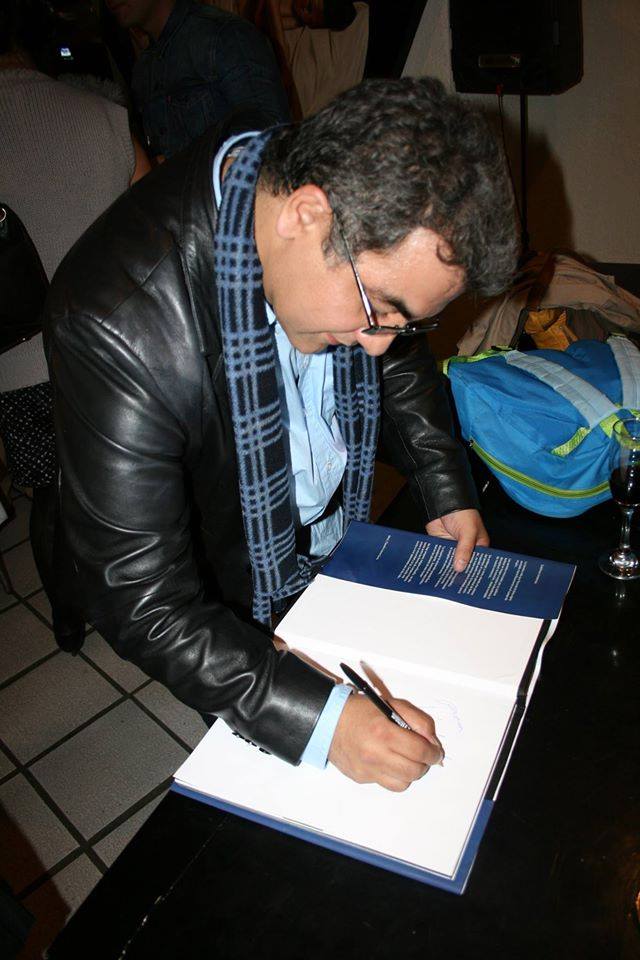 TYT – Last year you presented an exhibition named “Mujer-Es”. Your work was hailed and applauded by critics. One of them said:  -Marco engages in the soul of these women reflected in his paintings.” –Please interpret it for us.

MZ – I’m a lucky man. I have been fortunate enough that at each and every hard moment in my life a woman has appeared bringing light, shade and color… but also a mystery. You see, I have been surrounded and I have coexisted with those beautiful beings… I have learned to love them, but not to understand them. People often ask me why I draw and paint women showing their backs, I think that somehow in my life, I have never being able to face women -metaphorically speaking- and through life it has been easy for me to love them but hard to understand them. That personal “enigma” is what I have always painted.

I paint women and collectors buy these works since like me, they love and idolize women. No two are alike, as each stroke on each canvas. They are unique… unrepeatable. 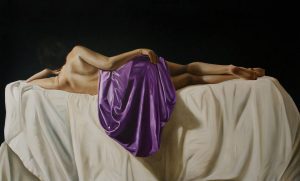 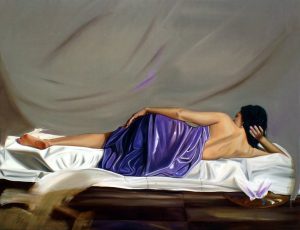 Regarding muralism, Marco Zamudio deemed to have ceased to exist as a political movement, but still remains a powerful form of expression. 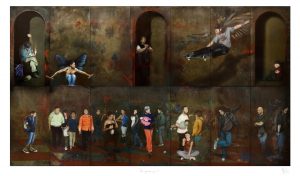 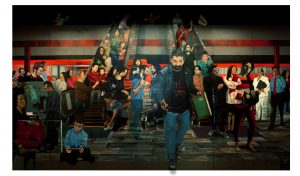 MZ – I got to Merida at the invitation of my friend Aida Lopez, looking as I mentioned before, to contact galleries; people who might be interested in my work. I have visited several places and although the date is yet to be defined, my paintings will be exhibited publicly in the “Jose Peon Contreras” theater art hall. The exhibition will consist of about 85 to 100 pieces entitled “Sublime irredentas” also; privately there will be an event for collectors and we are currently in conversations with the owner of Soho Galleries.

TYT – “Sublime irredentas” is the title of the exhibition, but what does it mean?

MZ – The name refers to two of the great mysteries for man, but especially for me, since for neither have answers: women and death. We don´t know what lies beyond death and it seems incredible, but most men, do not understand women in any way… at least I do not. Although we speak of a dichotomy: women and death; both badges of eternity. No man can exist without a woman; it is life-giving and also is the one who takes it, if we talk about death.

TYT – What do you mean when you say: “women take your life”

MZ – Ending a relationship is to die a little. You feel life as you know has ended and with the parting of that someone you have deeply loved,  you can´t help wonder how days, weeks, months, years to come will be without that someone. Eventually you´ll come to a healing process and pain, will to some extent, go away, but that piece of your soul, of your being… it never returns, that person takes it for good. That is a piece of death. 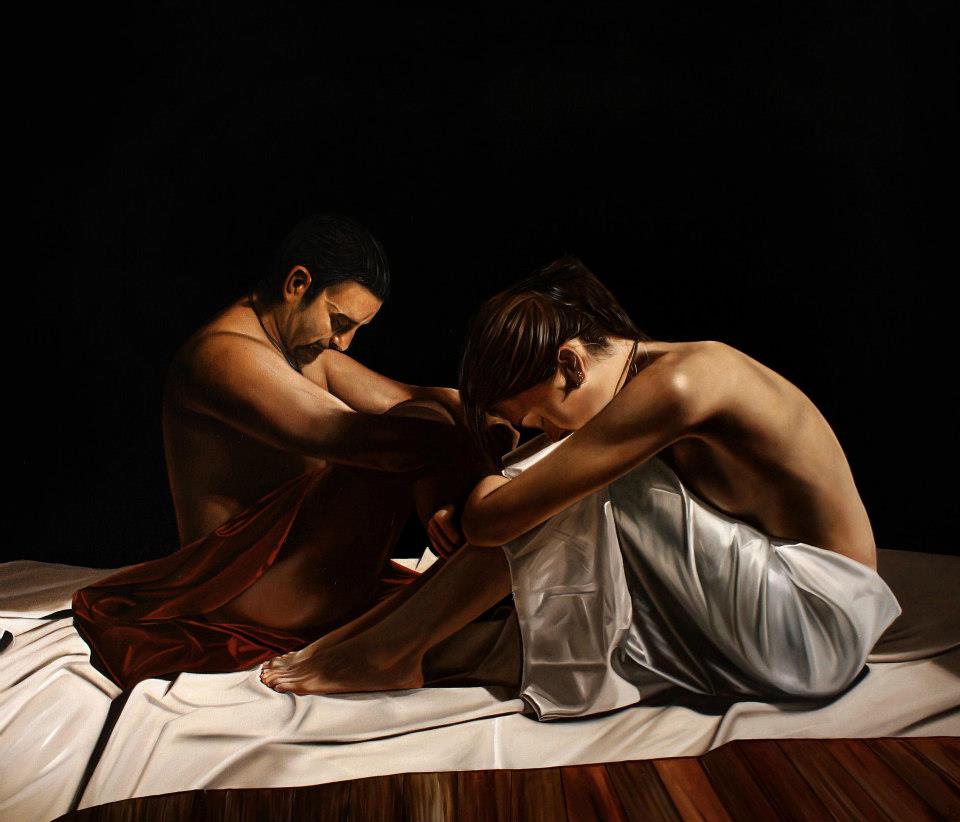 TYT – What does the future hold for Marco Zamudio?

MZ – Fortunately a lot of work. From the 13th to the 15th of November the “International Meeting of Poetry and Painting” will take place in Veracruz, where more than 50 poets from 20 countries, will create each a poem inspired by one of my paintings to form an anthology. The event has been organized by the poet Mario Islasáinz and Ars Fomento Cultural A.C. Later I will return to Merida for the private meeting with collectors who want to know more about my work. Finally, in late November to mid-December I’ll expose in Spain to close the year well and open a 2016 filled with exciting new projects that we will be talking about later on, amongst those, the possibility of working in a mural for the City of Merida but as I said, we will see what the future holds.

MZ – Fortunately a lot of work. From the 13th to the 15th of November the “International Meeting of Poetry and Painting” will take place in Veracruz, where more than 50 poets from 20 countries, will create each a poem inspired by one of my paintings to form an anthology. The event has been organized by the poet Mario Islasáinz and Ars Fomento Cultural A.C. Later I will return to Merida for the private meeting with collectors who want to know more about my work. Finally, in late November to mid-December I’ll expose in Spain to close the year well and open a 2016 filled with exciting new projects that we will be talking about later on, amongst those, the possibility of working in a mural for the City of Merida but as I said, we will see what the future holds.

Thank you very much for the interview Marco.

See more of Marco Zamudio´s work or contact him: