A snake gave passengers on a commercial flight in Mexico quite the s-s-scare on Sunday, November 6.

Video captured by Indalecio Medina shows the serpent slithering from the ceiling near an overhead luggage compartment before partially dropping into the cabin of the Aeroméxico flight.

The scene garnered plenty of comparisons to the Hollywood thriller and action movie, “Snakes on a Plane,” starring Samuel L. Jackson.

Medina told ABC News today that he “controlled the snake with a blanket” before the plane landed in Mexico City and animal control personnel arrived. 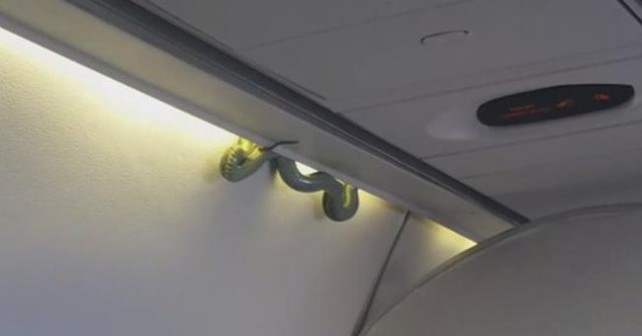 Aeroméxico said in a statement that “due to the presence of the animal and following security protocols, the flight was given priority to land” at Mexico City International Airport. Once the plane landed, airport personnel “secured the reptile.”

“The procedures carried out for this flight are currently being evaluated to determine how the animal entered the cabin and measures have been taken to avoid such incidents in the future,” Aeroméxico added. “For Aeroméxico, the security of its passengers and crew is of the highest priority and it always works to meet the highest quality standards.”