Former Sonora governor Guillermo Padrés Elías turned himself in to a federal judge to be tried for the crimes of operations with resources of illicit provenance and tax defraud.

He claimed to be innocent and hoped he would have no further allegations, but the Attorney General’s Office (PGR) obtained another order against him for organized crime and money laundering. His son, Guillermo Padrés Dagnino, was also arrested, since he did not have an injunction.

Representatives from several parties demanded Javier Duarte and other former governors who are sought by authorities to turn themselves in, like former governor of Sonora Guillermo Padrés did.

A group of legislators stated that the corrupt activities carried out by the former governors of Sonora, Veracruz, Chihuahua and Quintana Roo must not go unpunished. 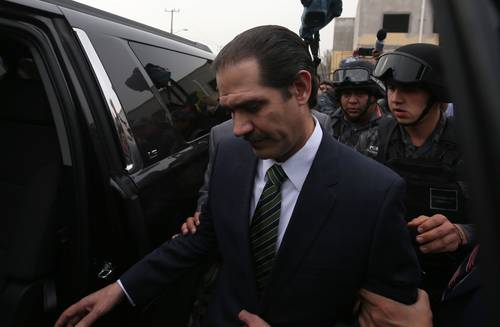 Javier Bolaños Aguilar and Marko Cortés, both representatives from the National Action Party (PAN), agreed that the decision made by former Sonora Governor Guillermo Padrés to turn himself in was “brave” and the right thing to do.

Bolaños Aguilar, who leads the Chamber of Representatives, said that he is confident his peers will follow the example set by Padrés. Bolaños also added that he has complete confidence in judicial branch and that at this point, a political negotiation will only tarnish a brave decision.

Marko Cortés, coordinator of PAN representatives, noted that Padrés should be tried judicially and not politically. He said he expects the processes to be transparent and hopes that Javier Duarte will soon turn himself in.

Institutional Revolutionary Party (PRI) representative Pedro Luis Noble said that it was up to the authorities to determine the culpability of Padrés, who went into hiding for several months. He also expects Duarte de Ochoa to follow suit.

Green Party (PVEM) representative Jorge Márquez Alvarado noted that Guillermo Padrés had run out of options and turning himself in was his last resort.

“It would be great if everyone did the same, if everyone who is charged with an offense would come forth and set it straight,” he said.