The U.S. Transportation Department said on Friday Nov. 4 it has tentatively granted antitrust immunity for a planned alliance between Delta Air Lines Inc (DAL.N) and Grupo Aeromexico SAB de CV (AEROMEX.MX), and proposed that the carriers divest some flight slots in New York and Mexico City.

Opponents have until Nov. 30 to raise objections to the tentative decision. 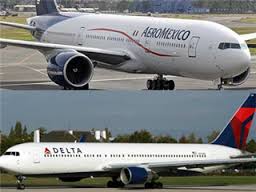 The divested slots would need to go to U.S. or Mexican low-cost carriers and low-fare carriers for international service, the department said in an order announcing the decision. “This remedy would allow for new, competitive entry at these airports that would not otherwise be possible,” it said.

The department’s order said demand for flights to Mexico from the United States “has grown rapidly in recent years and is expected to continue to do so.”

It also noted that Delta and Aeromexico control nearly 50 percent of the slots at Mexico City’s Benito Juarez International Airport, and said the allocation of slots “is dependent on confusing and often unwritten rules, making it extremely difficult for new entrants to launch competitive service.”

The proposed antitrust immunity order would last for five years, the department said.

The carriers would also have to submit traffic data and annual alliance reports to the department.