The US Pacific Warning Center said hazardous tsunami waves are possible Thursday Nov. 24 within 186miles of an earthquake epicentre off the coast of El Salvador.

The warning came just minutes after a 7.0-magnitude earthquake struck at 12.44pm local time (6.44pm GMT) at a depth of 20miles, about 96miles south-southwest of Puerto Triunfo in El Salvador, according to the US Geological Survey.Seismologists downgraded the earthquake from 7.2 earlier.
Meanwhile, Hurricane Otto has been coming through Central America this afternoon where it hit the Caribbean coasts of Nicaragua and Costa Rica.
Emergency services in El Salvador said on Twitter there were no immediate reports of damage at a national level, but urged those living along the country’s Pacific coast to withdraw up to one kilometre (0.62 mile) away from the shore.
The earthquake was very shallow at just 6.4miles below the seabed, which would have amplified its effect.Nicaraguan President Daniel Ortega declared a state of emergency due to the quake and Hurricane Otto, which landed on the country’s southeastern coast earlier on Thursday, his spokeswoman said.
El Salvador’s government said it saw the threat of tsunami waves hitting the coast.

Earlier on Thursday, the Category 2 hurricane hit land near the southeastern coast of Nicaragua, where thousands had already been evacuated away from vulnerable coastal areas and into shelters.

The US Tsunami Warning Centre said time between wave crests could vary from five minutes to an hour, with the hazard possibly persisting for “many hours or longer after the initial wave”. 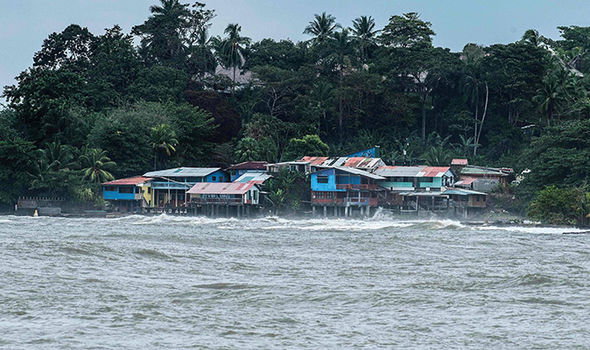 A report added: “Persons caught in the water of a tsunami may drown, be crushed by debris in the water or be swept out to sea.”
Hurricane Otto had originally hit Panama as a tropical storm before being upgraded to a hurricane earlier today.
Source: express.co.uk