The Yucatan Times talked to Marco Zamudio on the morning of Friday November 18, just one day prior to the inauguration of his exhibition at SoHo Galleries, in Mérida, Yuc.; the conversation went from the theme of this exhibition, the technique and then to the question: Why Mérida?… This is what the artist told us:

The exhibition is a series of 13 or 15 paintings in which I have been working on for about four months now.

This work deals with two mythological characters: Arion, the horse of Heracles; and Venus.

The whole thing is rooted in the character of the woman, the character that I see as a horse, a wild steed, from which we can learn a lot and that can stand and endure as it is a truly powerful and strong entity.

The woman has that character, every woman an indomitable colt, paradoxically they are virile, they can even play the role of mother and father at the same time, sometimes they exercise fatherhood better than men.

So like Arion, I see a wild, powerful character in women, that takes them in an inner rebellion; but at the same time, we know of their nobility, that’s why I chose the other archetype of Venus. Therefore, the pieces float around those two mythological characters, beyond their history, their nature.

The techniques are mixed, and I have worked on this material that I “discovered” this year, it is called styrene, because Merida is a location with high levels of heat and humidity, compared to Mexico City, other states in Mexico, or other countries. When one works with acrylics or polymers, you do not need to take the same precautions as in working with oil, for instance.

For one year now, I have been working on this technique, in a figurative way, because after many years, I am trying to give back to the art of drawing the dignity that it has always deserved, and this comes from the studies I’ve made of old techniques such as the silver tip.

In this exhibition I wanted to make a radical change, I dare to use this new technique that has allowed me to discover that I can leave behind the rigor of detailed drawing, to focus more on the expression, then jump to figuration, and finally take a bigger leap onto expressionism itself.

I love drawing or painting in a very realistic way, that’s my thing… but I always end up trapped in some kind of prison. There are many things inside of me, inner demons that I want to bring out and give my work that identity.

Why bring this series to Mérida?

We are talking about a complete series, there are 2 sketches for the study of “Alice in the darkness” that I´m going to exhibit in a museum in Monterrey, with another 24 pieces in 2017. But I wanted to bring some of these “features” to SoHo Galleries, which gave me the opportunity to be here in Mérida.

I was invited to Mérida, by Adele and Yesenia from SoHo Galleries, and from the moment I met them, we made a click, their opening for contemporary art made me work in these pieces in order to seek a more significant reaction from the public, because I am usually a little bit more inclined to work in large cities.

But now that I have been exhibiting in other cities and states, apparently smaller, I am surprised to learn that people are thirsty for different expressions of contemporary art, not only for the typical painting of those states, but they are eager to try other things and to meet the creators, in the end, the consequence of good art is to move the viewer, once you get that, the “circle of art” is 100 percent complete. 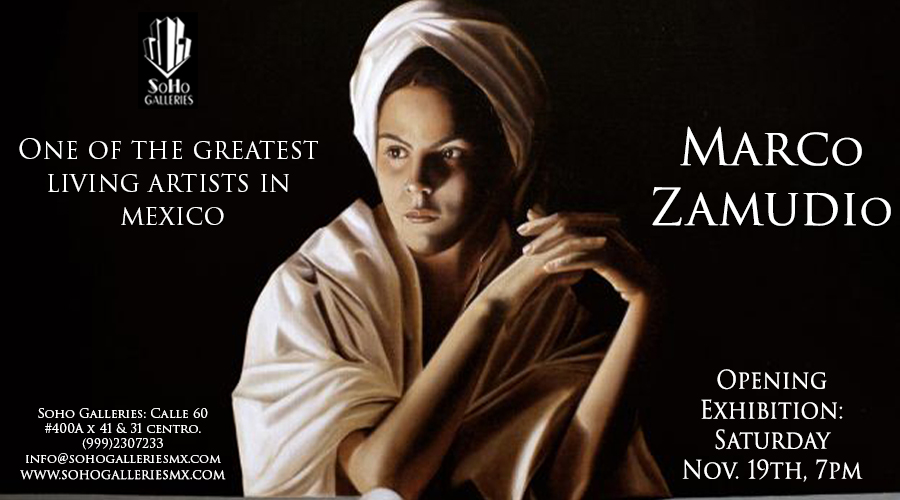 Marco Zamudio was born in Mexico on May 18, 1973. He graduated in Visual Arts from San Carlos National School of Plastic Arts, in 1995.

In 1995 he collaborated in the creation of the Mural ‘El Águila and the flights’ for Banca Serfín collection by the artist Arturo Rivera.

In October 2010, MARCO ZAMUDIO made the mural THE PASSENGER, showcased at the Insurgentes subway station of the Metro collective transport system in Mexico City.

In September 2012, his second mural EL ANDEN DE OUROBOROS was inaugurated at the Tlatelolco subway station of the Metro collective transport system in Mexico City.

Interview by Raul A. Palomo for The Yucatan Times