Habitat III is the United Nations Conference on Housing and Sustainable Urban Development, which is currently taking place in Quito, Ecuador, (from 17 – 20 October 2016).

In Resolution 66/207 and in line with the bi-decennial cycle (1976, 1996 and 2016), the United Nations General Assembly decided to convene the Habitat III Conference to reinvigorate the global commitment to sustainable urbanization, to focus on the implementation of a New Urban Agenda, building on the Habitat Agenda of Istanbul in 1996.

As the global population grows from seven to nearly ten billion by 2050, we will need to build the equivalent of a city of one million people every five days to house them.

The world already has ten cities with more than 20 million inhabitants, including Tokyo (37 million), Beijing (21 million), Jakarta (30 million) and New Delhi (25 million). Out of the seven billion people in the world, 6.7 billion live with pollution above WHO clean air standards.

By 2050, around 12 million people from 23 cities in East Asia alone will be at risk from coastal inundation. Planning for climate change will be critical to minimise risk to these areas.

These are just some of the stark facts about our global urban future.

With these issues in mind, up to 50,000 participants have gathered in Quito this week to discuss a New Urban Agenda at Habitat III – the United Nations Conference on Housing and Sustainable Urban Development. 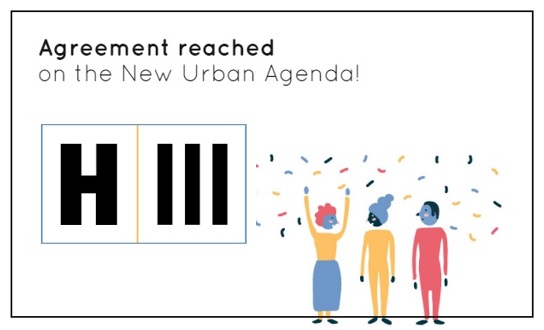 From Paris to Quito

The Paris agreement on climate change will come into effect in November 2016. Cities will be at the heart of achieving its aim to limit global warming to less than 2°C. Planning for a low-carbon and resilient urban future is now our greatest global challenge. It is critical to achieving emission reduction targets and planning cities for climate change.

After all, cities produce 76% of carbon dioxide emissions and account for 75% of energy use worldwide.

The focus is now on implementing the Paris agreement; that is where the New Urban Agenda, proposed for agreement at UN Habitat III, comes into play. Key issues being discussed include affordable housing, urban transport, gender equity, empowerment of women and girls, poverty, and hunger in all its forms. Involving communities in the future and design of cities is essential. Better urban governance of our growing cities and urban regions is a core theme.