Why is the Mexican peso tied to the whims of the American voter?

One proxy has captured the attention of market-watchers: the Mexican peso (MXN).

The peso has shown increased sensitivity to the US election, with currency weakness corresponding to shifts in opinion polls that have suggested a higher likelihood of a Republican victory.

Uncertainty surrounding the US presidential election appears to have contributed to the currency’s weakness this year. In fact, the Mexican peso is the worst performing emerging market currency year-to-date and the only major emerging market currency—other than the yuan (CNY)—that has meaningfully depreciated against the US dollar, as HSBC highlighted in a recent note.

Certainly the declining peso has other influences including falling oil prices. Wells Fargo analyst Erik Nelson explained that the Mexican peso, given it is among the most liquid of emerging market currencies, is often used as a hedge to offset bets on the broader emerging market. (Daily average turnover for the Mexican peso is $112 billion for 2016compared to $135 billion in 2013).

Nonetheless, it appears to show trading correlation with US election prospects.

This has been particularly evident after it didn’t participate in a recovery in oil prices or global equity recovery, as Wells Fargo points out below. 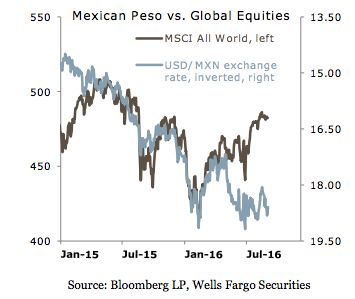 While economists have highlighted the difficulty of deciphering how much US election premium is priced into the peso, according to Goldman Sachs, a 10% increase in the probability that Secretary Clinton wins the election is associated with a 3% appreciation of the peso.

Why would a potential Trump presidency have such a significant impact on the peso?

Ever since he declared his candidacy in June 2015, and infamously called Mexicans rapists, the country has been a focal point for his proposed policy measures.

Most significantly, Trump has proposed double-digit tariffs on Mexico and ending or renegotiating the North American Free Trade Agreement (NAFTA), which has been key to opening Mexico’s economy to global export over the past twenty years. Mexico is an export-oriented economy with more than 90% of Mexican trade is under free trade agreements, NAFTA being the most influential. In fact, 80% of exports go to the United States.

And while Congressional pressure could mitigate the degree of presidential proposals, if he were elected president, Trump could have a significant influence over US trade deals. Congress has delegated authority to the presidency to regulate trade via several statues, the Peterson Institute has noted. For example, under the Trade Act of 1974, the president can impose temporary tariffs of up to 15% for up to 150 days against a country if there’s a large balance of payments surplus. Under the Trade Expansion Act of 1962, the president can impose tariffs or quotes if there’s a finding of an “adverse impact on national security from imports.”

Additionally, Trump has said he may block worker remittances to Mexico, make Mexico pay for a border wall, and deport Mexican undocumented workers from the United States.

Even Bank of Mexico officials have commented on the election, with Bank of Mexico chief Agustín Carstens saying a Trump presidency would be “a devastating hurricane of major intensity.”

Even as probability of a Trump president has declined in recent days following the leak of his Access Hollywood tape, HSBC warns “never say never,” especially after low expectations for a Brexit vote that were proven wrong.

The weakness in the peso has influenced Mexican central bank policy. Even though Mexico has not experienced an overheating economy—the economy shrank for the first time in three years in the second quarter—rate increases have come in response to election influence on the peso.

At the end of September, Mexico’s central bank, Banxico, raised rates by 50 basis points to 4.75%.

The bank has been explicit in explaining their close watching of the currency in rate decisions.

And HSBC added that, under a Trump presidency, the peso could weaken further.  In turn, the central bank would likely increase the policy rate—potentially to 6%—to defend the currency on concerns over potential financial instability. This of course comes as the US Federal Reserve is expected to raise rates come December, which could put further downward pressure on the peso.

Mexico’s continued rate increases could come despite economic growth deterioration, which could be further dragged down from trade policy, declining domestic incomes, falling remittances, and higher unemployment (inflated by a return of an undocumented workers from the US—in 2014, 5.6 million Mexican illegal immigrants worked in the US according to PEW Research Center).