ISLA HOLBOX, Q. Roo — Ben Herrera writes in Culinary Backstreets that even in well-trod Mexico, little pockets of paradise can still be found. Located to the north of the Yucatán Peninsula, where the Gulf of Mexico meets the Caribbean, little Isla Holbox is one of the most beautiful places we have visited in the country.It’s easy to lose track of time just meandering down dirt roads past brightly painted palapas (buildings with palm-leaf roofs), sunning yourself on a tranquil beach, watching spectacular sunsets and eating delicious seafood.

Getting to the island isn’t easy, however. There are buses from Mérida, Cancún and Playa del Carmen to Chiquilá, and the trip can take up to four hours on roads that are not always the smoothest. From there, ferries cross over the Yalahau lagoon to the final destination.

The island’s population is less than 2,000, and, because it is part of the Yum Balam nature reserve, cars are not allowed on the island. People commute on golf carts and bicycles, which for us was a lot of fun and a great way to get around and see most of the island. Isla Holbox is not yet heavily touristed, and the main industry is fishing, although many locals have turned to tourism-focused businesses such as hospitality, wildlife sightseeing by boat and restaurants.

Eating in Holbox is also an adventure. Despite its growing popularity as a tourist destination, Holbox still has that small-Mexican-town feeling where life is slow and very, very relaxed. Addresses don’t mean much here. When we asked at the front desk of our hostel about the best places to eat, we were directed to several restaurants, but we were also warned that some of those places might or might not be open. (We were disappointed to find that Las Panchas, a restaurant recommended by many guides, wasn’t open during our stay, for example, but fortunately there were plenty of great alternatives.) Business hours are highly variable, as is the case for many of the places we’ve listed.

La Isla del Colibri is inside a pink building right in front of the main square; it’s a very appealing breakfast spot. Freshly squeezed orange juice and strong aromatic coffee were brought to the table – always a good sign of a great breakfast. We ordered the chorizo (excellent) and eggs as well as the shrimp (very fresh) and eggs. 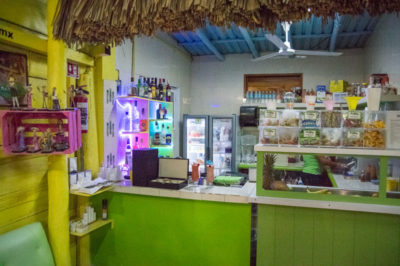 Ángeles y Diablitos is right across the street from La Isla del Colibri and is considered to have the best ice cream on the island. We stopped by to cool down from the tropical heat, and in addition to a beer, we had coconut ice cream and a mango milkshake. It also offers crêpes, shaved ice, hamburgers and coffee. This place is great for relaxing and people watching.

All towns have a fabled restaurant or dish that tourist guides say can’t be missed, and Holbox is no exception. When we started making plans for this trip, a few friends told us that we had to try the famous lobster pizza. Some locals, however, told us that it was nothing out of this world, and the place was nothing more than a tourist trap. We thought it over and decided that we didn’t have anything to lose in trying the legendary pizza. It was a good decision. Pizzeria Edelyn is the self-proclaimed originator of this delicious pie topped with tomato sauce, cheese and fresh lobster. 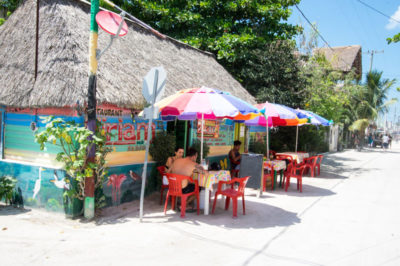 As with many other trips we’ve taken, the best places to eat are usually off the beaten path – which, in the case of Holbox, is just a couple of blocks away from the main square. The best meal we had on the island was at Restaurante Miriam, a small eatery in the front of a house where the eponymous owner and her husband live; she cooks and he waits tables. This was another one of those places we were warned might be closed, but fortunately for us, it was open the day we visited. The menu is simple but everything we had was delicious, starting with the empanadas – one shrimp and one lobster. Our main dish was Pescado Holbox, a fried fish fillet with a sauce made from passion fruit and habaneros that Miriam invented, according to her husband. It had that sweet-spicy combination Mexicans love so much and that worked perfectly with seafood.