Merida art lovers are in for a special treat this November, as a talented collective of Cuban artists stops here on the first leg of their international tour.  The organizer, SEDECULTA, has chosen the Centro de Artes Visuales in Santa Ana for the venue of this important exhibition, which includes ten separate exhibits showcasing the works of some of the most talented Cuban artists of today.

The Centro de Artes Visuales sits directly across the street from the Santa Ana church on Calle 60.  A modest façade belies what sits behind the front door:  classical architecture with two courtyards and rows of columns and arches, in addition to a number of fully enclosed rooms where the individual artists will be in attendance to show and discuss their latest work.

The Expo begins with a sneak preview on Tuesday November 22, where guests can meet the artists and enjoy Cuban music (by Cuban chanteuse Maydel Garcia) and hospitality in the form of Cuba Libre cocktails and Cuban snacks.  Donation:  $120 pesos advance purchase (tickets available from Door54, Calle 54 and 35 Centro).  The Expo continues Wednesday November 23rd with the official inauguration, with special events each night through Saturday November 26.  The art will be on display through December 6 (except Mondays), when the Expo moves to its next international destination.  The sneak preview begins at 7:00 pm on Tuesday;  all other evening events begin at 8:00 pm.  Stay tuned for more information about the specific events in forthcoming issues of The Yucatan Times.

Almost every field of artistic expression will be represented:  sculpture, abstract art, realism, film, performance art, even poetry.  Here is a sampling of the artists with examples of their past work.  The Expo will feature their most recent work, some of it specifically created for the show.

José Ramón Villa Soberón (born September 2, 1950, Santiago de Cuba, Cuba) is known for his public sculptures around Havana. He studied at the Escuela Nacional de Arte in Havana, Cuba and the Academy of Visual Arts in Prague. His sculptures, paintings, engravings, drawings and designs are held by the Museo Nacional de Bellas Artes de La Habana, and in 1996 he was one of the selected artists in the second Trienal Americana de Escultura in Argentina. 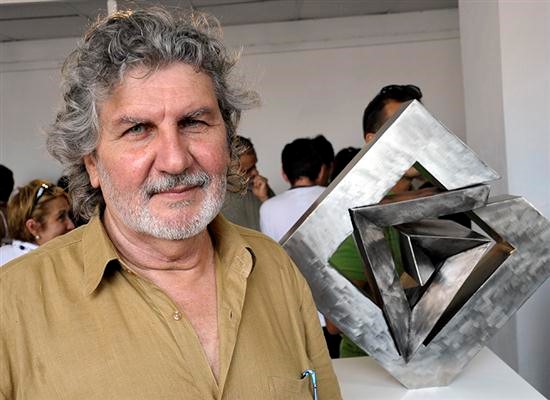 Javier Ampudia Pacheco was born on April 7, 1985 in Pinar del Rio, Cuba. He was already showing great promise at the age of 15 when he enrolled in the Art Instructors School in Pinar de Rio, Cuba. After graduating in 2004 he continued his visual arts studies at the University of Raphael Maria Mandive, where he received his masters’ degree in Fine Arts. Today, art lovers are drawn to his phenomenal realism skills juxtaposed in surrealistic surroundings. His paintings use fish, fruit, carving knives, and helmets, and have a haunting quality that play with the viewer’s imagination. Little wonder that his numerous paintings are now part of private art collections in the United States, Spain and Guatemala. 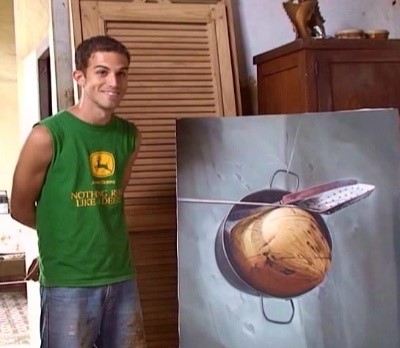 Leandro Soto Ortiz:  Born in Cienfuegos, Cuba, in 1956, avant-garde artist Leandro Soto has participated in more than two hundred exhibitions and performances at both national and international venues. He received his degree in Fine Arts from the National School of Art in Havana, and in 1982 he received his teaching certificate at the Graduate Art Institute at the University of Havana.

Soto formed part of the “Volumen Uno” art movement in Havana in 1981 and was the first performance-installation artist in Cuba. Along with artists such as José Bedia and Carlos Cárdenas, he is considered part of Cuba’s “1980 generation” of artists. In 1988 he moved to Mexico, where he established the interdisciplinary art school El Tesoro de Tamulté for indigenous children of the Maya-Chontal community.[1]

Throughout his artistic career, he has demonstrated an interest in religion, ritual, and the mythology of indigenous people. Currently he is Senior Lecturer and Artist in Residence at Arizona State University in the Interdisciplinary Arts and Performance Department. 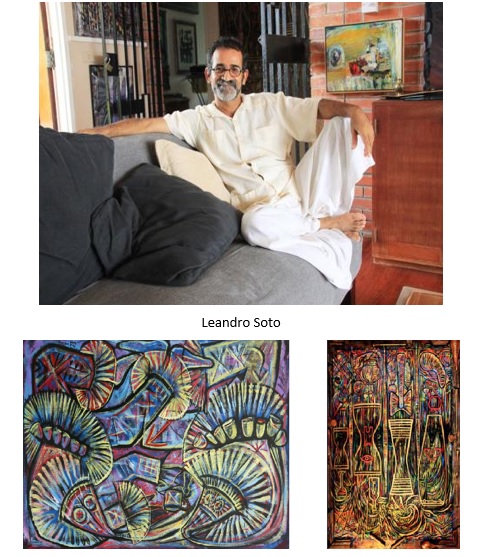 Raul Corrales:  Born in Ciego de Avila, Cuba in 1925, Raúl Corrales moved to Havana as a young boy where he developed his passion for photography. Emerging from roots in the harsher landscape of Cuba, he trained himself as a street photographer, searching for images that brought out the humanity of his subjects.  From 1959 to 1961, Corrales took on the role of official photographer to Fidel Castro, emerging as one of the artists in the forefront of Cuban photography of the period, creating a body of work that became the face of the Revolution to the outside world. Corrales contributed some of the most personal images of the Revolution and its leaders, photographing the intimate, heroic, tragic, and ironic sides of his subjects.

In 1959 and 1996, Corrales was awarded the Premilo Nacional des Artes Plasicas, one of the most prestigious Cuban awards for artists. His work has been featured in several solo and group exhibitions in Europe, Latin America, and the United States, and remains in the permanent collections of many museums worldwide, including those in the United States, Cuba, Italy, and Mexico. Raul Corrales died at the age of 81 in April 2006.  He is represented at the Exposition by his son. 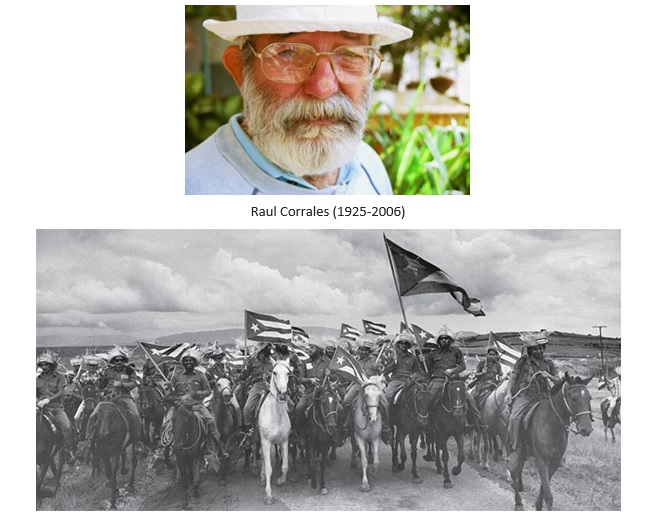 Maria Elena Diaz de Villegas was born in Havana on January 14, 1956. She was raised in Miami, where she obtained a Masters in Clinical Psychology. Despite her academic credentials, she has maintained close ties to art, be it theater, poetry, or photography – “the camera lens is your intimate way of looking at and walking through life.”  Her photographs capture the look of a girl in Peru, the joy of lovers in Paris, or the mysterious sadness of a gorilla in captivity.

Winner of the prestigious International Latino Book Award 2016 in the LGBT category, she has had exhibitions of her photography in Little Havana and Coconut Grove, Florida. Her first book of photography and poetry, “I Phoenix” was published in 2014.  She lives in South Miami, Florida with Alice, her wife and partner of 20 years.

James Bonachea Guerra (Sancti Spíritus, Cuba, 1977) lives and works in Mexico City.  His work makes use of multiple media: performance, video installations, and site-specific works. Each work is a dialogue with space, its function or significance, creating a different way of relating to each other. He studied at the Escuela Profesional de Artes Oscar Fernandez Morera, in Trinidad, Sancti Spíritus and the Instituto Superior de Arte in Havana. He was part of the DUPP and Enema collectives, as well as Tania Bruguera’s Cátedra Arte de Conducta, in Havana. He has had several solo exhibitions in Cuba and Mexico, and he has participated in the Mercosul and Liverpool Biennials.

Ernesto Fernandez Valmaseda (Magua):  In the early 80s, Ernesto Fernandez Valmaseda (Magua) decided to devote himself to the visual arts as the prime motivating force of his life. Everyday objects, coffee pots, plates, cages, hammers, tongs, sticks clotheslines, whistles, became the center of his creative expression.  In 1989 he graduated as an engraver at the ENA, and participated in a variety of workshops through the 1990s and into this century. 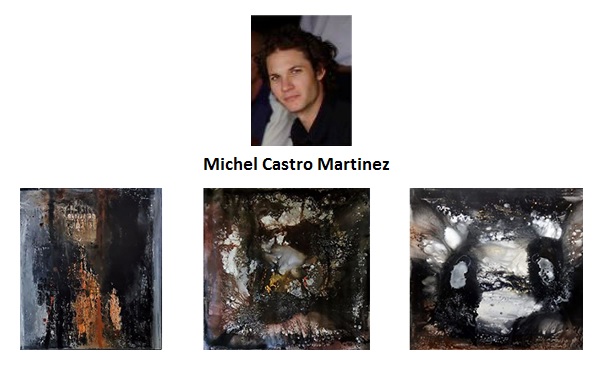