One of FBI’s “Ten Most Wanted Fugitives” caught in Mexico

MEXICO CITY, September 23, 2016 — After 17 years on the run, a Chicago man who is one of the FBI’s “Ten Most Wanted Fugitives” is now in custody, announced Michael J. Anderson, Special Agent in Charge of the FBI Chicago Field Office.

Fidel Urbina was taken into custody on September 22, 2016, without incident just outside Valle de Zaragoza, Chihuahua, Mexico.  He was apprehended by PFM (Policía Federal Ministerial) Interpol.  Urbina was placed on the FBI’s “Ten Most Wanted Fugitives” list in June 2012. He will remain in custody pending extradition proceedings.

“This arrest shows the excellent level of law enforcement cooperation between Mexico and the United States. It sends a strong sign that criminals will not find safe haven by crossing the border,” said Ambassador Jacobson. “We are friends, neighbors and partners and we stand together to protect our citizens. Our communities are safer because Urbina was taken down thanks to collaboration between the FBI and Mexico’s Federal Ministerial Police.” 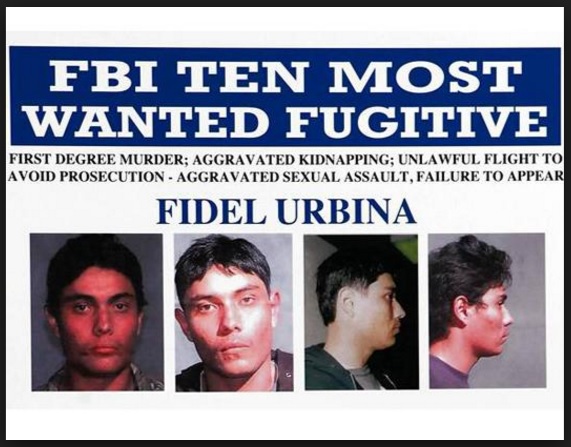 Fidel Urbina was wanted for his alleged role in two brutal attacks directed against innocent women. In March 1998, Urbina was arrested by the CPD and later charged with kidnapping, brutally beating, and raping a woman in Chicago. Subsequent to his arrest, Urbina was released on bond pending his trial in Cook County Circuit Court. While out on bond, Urbina was also suspected of assaulting and bludgeoning to death 22-year-old Gabriella Torres.

Her body was found in the trunk of an automobile, which had been abandoned in an alley in the 2300 block of West 50th Street in Chicago. The vehicle had been set on fire and Torres’ body was badly burned.  Attempts to locate and apprehend Urbina by local police were unsuccessful, as he had apparently fled the state.  On July 20, 1999, a federal arrest warrant was issued for Urbina, and on August 26, 2006, a provisional arrest warrant was signed by a Mexican federal magistrate.

Official Press release by the US Embassy in Mexico