Hillary Clinton won a song and an endorsement from famed Mexican ranchero singer Vicente “Chente” Fernández, her latest snap up of support from the Latino community.

The video flashes through clips of Clinton campaigning with Latino voters around the country, with Fernández serenading in the background. The singer put the song together with the help of Latino Victory Project, a group whose political branch, Latino Victory Fund, endorsed Clinton in February. 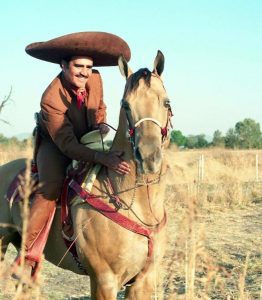 He also takes a few swings at Donald Trump, referring to the Republican candidate’s insults directed at Mexico.

“A mi pueblo le dolió que alguien hiciera una ofensa,” he says — it hurt my people that someone offended us.

As he closes, he adds that Clinton would be the voice for Latinos in America if she were elected in November.