Lourdes Gimena Anguiano, a role model for the youth of Yucatán

Lourdes Gimena, the first Gold Medal winner from a Spanish-speaking country in this International Competition, granted The Yucatan Times an exclusive interview in which she describes how she had to win two national design contests in order to get to the international finals, and how her family has been her support and inspiration.

Not many Yucatecans (or Mexicans) can say they have won a Graphic Design International Competition, organized by the major manufacturer of digital products in the world, held in the U.S., and competing against rivals from more than 30 different countries.  Check out the interview and get to know Gimena!

TYT: How would you describe yourself?

LG: I have always considered myself a person that gives all her best at whatever she is doing, I try never to leave things abandoned or incomplete, I constantly try my best as a student, as a classmate, as a daughter, I strive for the best everyday in my life.

I consider myself a quiet person, I do not like to make a big fuss, I like to be focused.

TYT: How do you get along with your family?

Very good, I love my family very much, despite being the only girl, I get along pretty well with my three brothers, we understand and love each other.

TYT: How do you do at school?

TYT: What grade are you in?

TYT: Where do you go to school?

TYT: How did you get interested in Graphic Design at such a young age?

LG: At computing class we deal with different types of computer programs every semester, and a couple of years ago we had an introduction to Adobe Photoshop. It was something brief, because Photoshop is a very complex program. But even before that, I had previous experience with Photoshop at home, because I have always liked art, I love to draw and design.

And then, my friends and family saw that I was doing all this beautiful things on the computer and they started asking me for designs and drawings. And Photoshop is the perfect tool for somebody who like to design, so, that´s how I began to learn more and more about it.

TYT: Please tell us, how did you find out about this competition, or how did you get elected to participate?

I did not know anything about this competition, until I won a national contest called PIBA (Premio Internacional Bachillerato Ananhuac), this is a competition among schools that belong to the Legionaries of Christ (such as the Instituto Cumbres Godwin, Mérida).

So they gave me the opportunity to contend in this PIBA competition, specifically in the category of “Graphic Design”, because there a lot other categories such as oratory, robotics, filmmaking, etc.

The specific name for the Graphic Design contest was “Communication with Imagination”.

In order to be accepted as a contestant, phase one was to design a poster. With certain specifications and a subject. In this case the subject was “Sports and integral formation of the individual”, the contestants had to create a poster using Photoshop and combining different visual elements.

I used a photograph and some of the Photoshop drawing tools, and sent my Project, the subject of my work was: “How physical formation influences the integral formation of an individual”. That´s what my piece was aimed to communicate in a visual way.

Besides, you had to include a written document explaining what you were trying to communicate through your graphic design work.

So I sent the JPG and PSD (because the judges needed to do an analysis of the use of Photoshop tools).

After a few days, my school principal was noticed that I was elected to compete in the PIBA finals at a national level in Hermosillo, Sonora, in northern Mexico.

So, the competition was held in Hermosillo, at one of the schools that belongs to the legionaries network (Semper Altius), the name of the contest was “Communication with Imagination” and contestants had six hours to design a poster using photoshop. 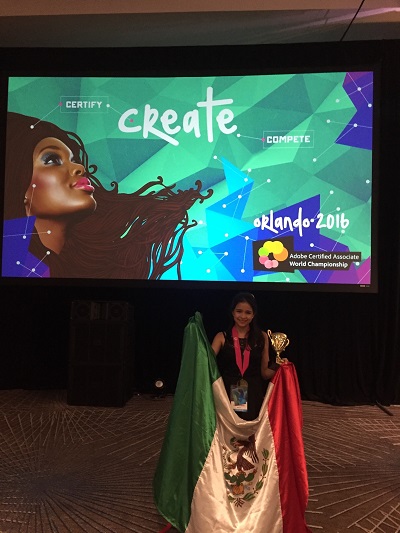 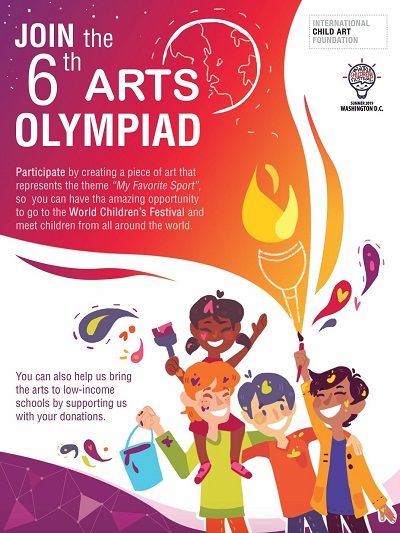 TYT: What was the subject for the poster?

LG: It was a sports focused subject. Contestants were given documents such as slogans, logos, images and a manual assigned to the project. I finished my work after 6 hours, and won the first prize.

TYT: Did you go to Hermosillo all by yourself?

LG: I went there as a member of the Merida delegation, I had several friends who were to compete in other categories.

TYT: Then, when did find out you were going to the United States?

LG: Well, right there I learned that the next contest was in Orlando, Florida, USA,.

TYT: The contest in Orlando, that’s the one organized by Adobe, right?

LG: Exactly, an organization named Certiport was associated with Adobe in this event.

TYT: Please, tell us about the competition in USA

LG: We arrived in the United States, checked into a hotel and the contest began at 9 am on the following day. All participants were gathered together in the same hall at the Lake Buenavista Hilton Hotel (near Disneyworld).

Each contestant was assigned a tablet, for illustration and digital drawing pad. Since I had prior knowledge of these tools, it was a great advantage. I felt like a fish in the water.

The competition in Orlando, was very similar to the one in Hermosillo. So I knew more or less was going to happen there. All contestants were given a document with requirements and specifications, as well as images we could edit and change, along with some restrictions too.

That was when I realized the competition was sponsored and organized by Adobe Certificate Associates, there were 30 contestants, from different countries. All instructions were given in English but participants had the right to request for a translator, I only asked for a translator in the end to check for any grammar or spelling mistakes.

TYT How long did the competition last?

LG: We had 8 hours to complete the Project, and it was a little tricky because they said you could go to have lunch, but they did not stop the clock at any time, so I did not go for lunch, I did not even go to the bathroom during all this time.

At the conclusion of the competition, I never thought I could win, in fact, I noticed I had commited some mistakes with image sizes and resolutions twenty minutes before the time was up! And so I had to make last minute changes in a hurry. So I never thought I had a chance to win.

They started with the top ten countdown, and I was thinking, it doesn’t matter if I don’t win, I can go back home with the experience of being here and had given it my best. 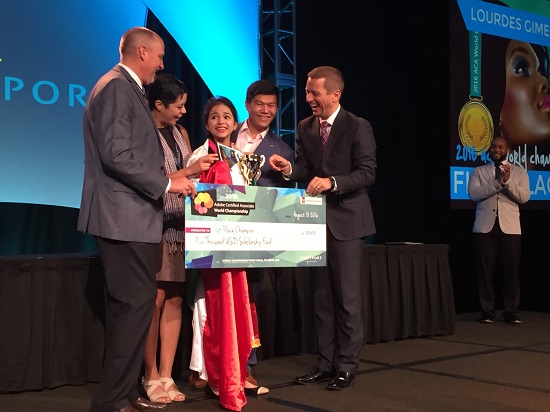 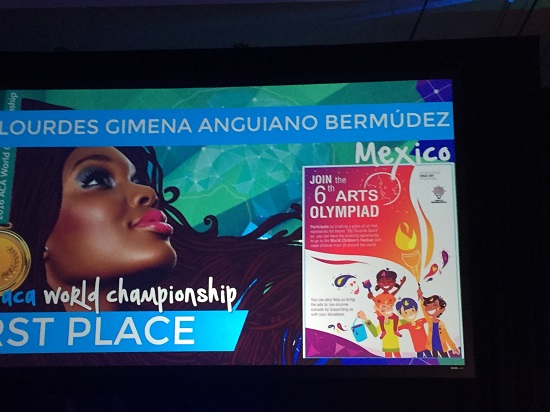 TYT: How did you react when they said you had won the first place?

TYT: Ah! So your mom was there too?

LG: Yes, fortunately my mom, my dad and my brothers as well, we all went to Orlando together, but my mom was by my side during the whole competition

TYT: What would you like to study when you go to college?

LG: I want to study the Digital Animation career, I love the idea of giving life to my drawings, I’ve always dreamed of creating my own animated characters.

TYT: Is there such a career in Mexico?

LG: No, only abroad, although Mexico has very similar programs, but the best countries to follow that carrer are the United States, Canada, Japan and some European countries.

TYT: Would you say your family has been important during this process?

LG: Yes, my parents have always encouraged me to get what I want. If it was not for my mom, I would had never make it this far. She saw that I loved drawing and painting (and computers), and so she always supported me and provided me with the necessary tools and equipment to do what I love the most

TYT: What would you say to the young people of Merida, Yucatan and all of Mexico, as a person who has won an international tournament?

LG: I would tell them to never give up; to give their best in everything they do; to never leave things halfway through. Never cease to strive for what they really want, because  in the end the satisfaction of having accomplished your own personal goals is greater than any other thing.

In addition I would say that your family is always there to support you, and if you have a good communication with your parents and your famliy, they can help you to achieve your dreams and aspirations.