When I see an adult pair of birds with chicks, I usually assume those two birds were the parents. If I notice only an adult with young, I assume it’s the mother. But my assumption would be wrong as in this photo with a male parent with chicks. 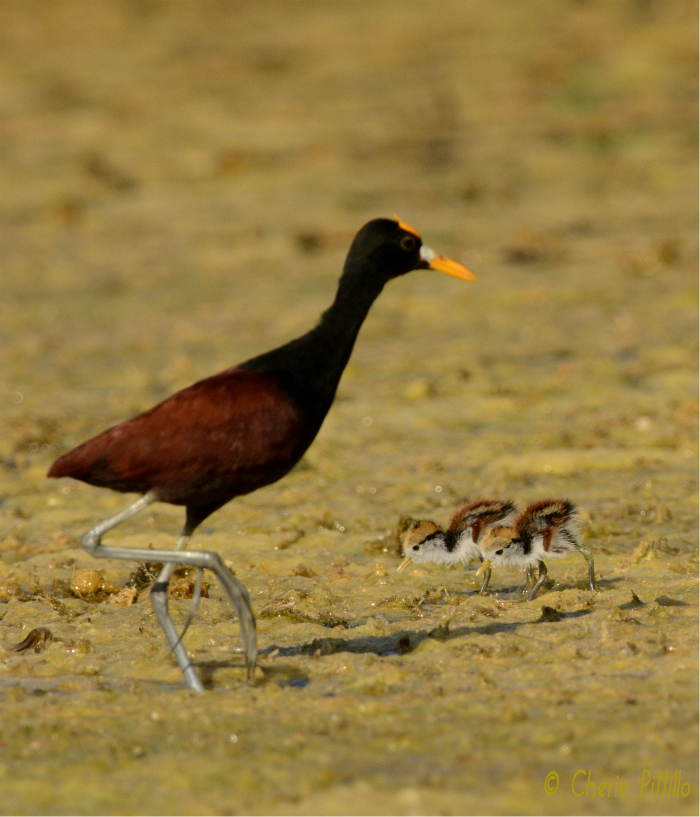 Adult male Northern Jacana walks by two of his four chicks. He builds the nest, sits on the eggs, and raises the young.

Hold onto your feathered caps, because a sexual role reversal occurs in the Yucatan Peninsula (and from S. Texas to W. Panama and the Caribbean, too.)

Welcome to the feminist, play-girl world of the female Northern Jacana. 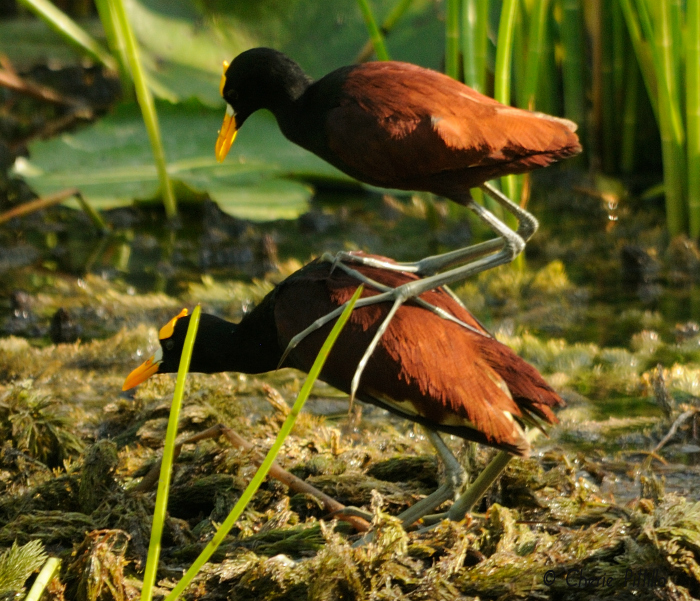 Female Northern Jacana is larger and heavier than the male

Larger and heavier than the male, the female Northern Jacana, about a foot tall, serves as overseer of a large territory with one to four males in it. Within the she-boss’ playing field, every male defends his smaller turf against other males.

The amorous female mates with her selected mate-of-the-moment when he has completed their floating love nest of matted vegetation. That’s a new meaning for welcome “mat”. Wonder if that was the original water bed? 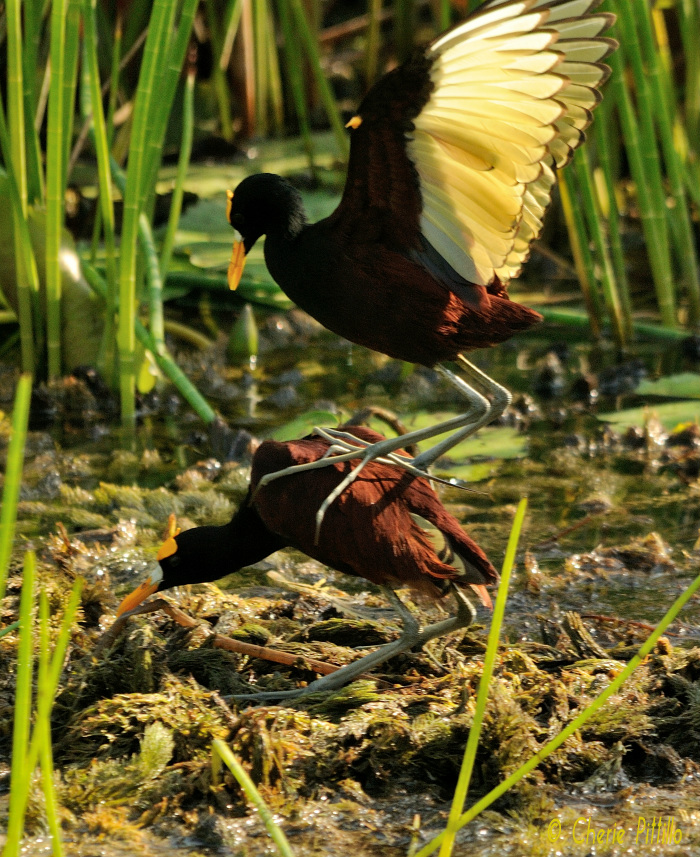 Female Northern Jacana may mate with one to four males within her territory. Male uses wings to balance

She lays a clutch of three to five eggs, usually four, and then departs to carouse with others in her harem. Meanwhile each male has all the parental responsibility to sit on the nest for three-four weeks and to protect and raise the chicks for several months. At least the female guards her domain against other females.

This type of breeding, termed polyandrous, is the rarest kind of mating in birds. I hereby rename the female Northern Jacana, Polyandrous Pollyanna!

Precocious chicks, called downies, can swim, dive, and feed within one-two days of hatching! Their dad leads them to food but doesn’t feed them. 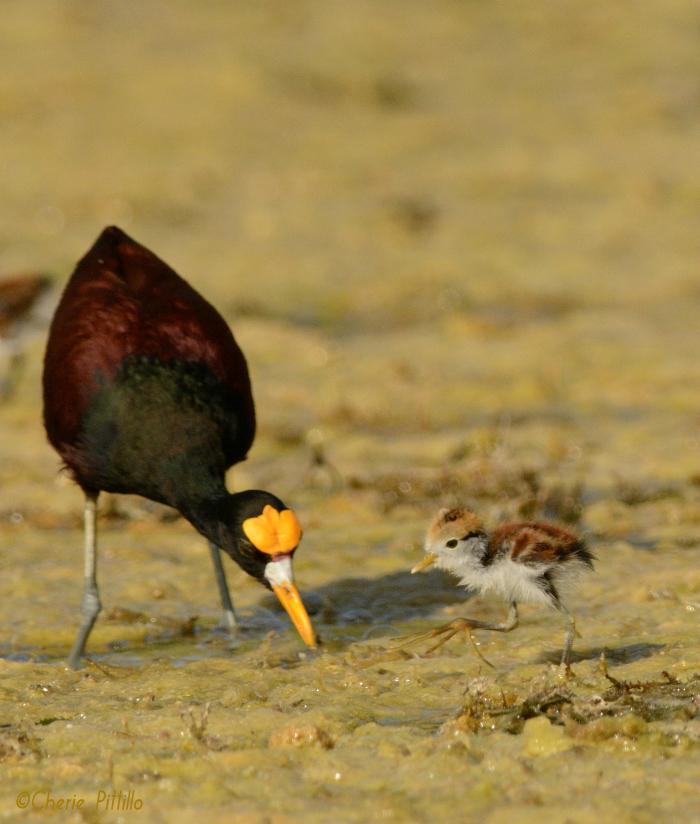 Male Northern Jacana points to food for his chick

When I first saw this male, he had four recently hatched chicks that looked like ping pong balls tumbling on the floating vegetation mat in search of tiny insects. How fascinating to see a chick coordinating long skinny toes at that age. 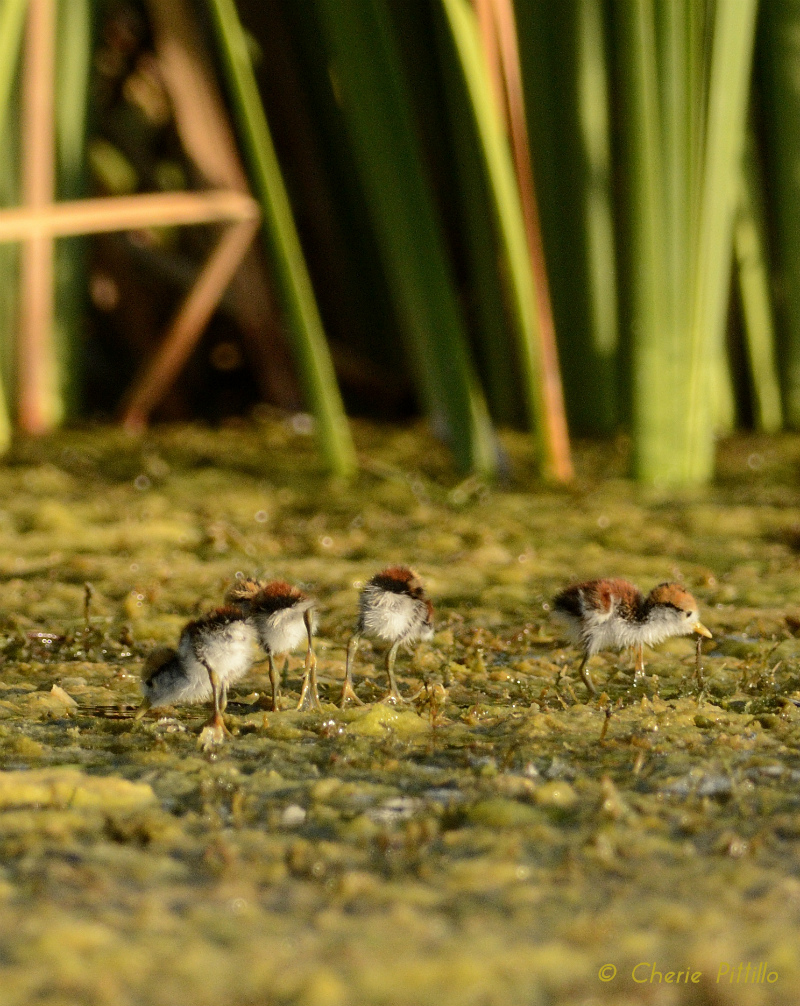 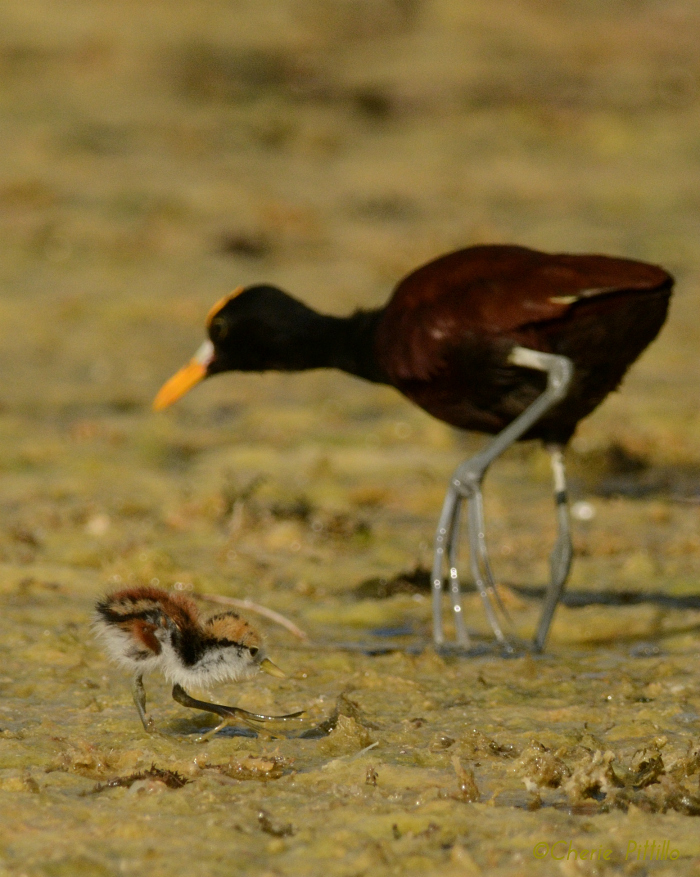 Even at one day of age, a Northern Jacana chick manages to run with its long toes

As a chick matures, yellow flight feathers adorn it like the adult. A wing adaptation, a yellow pushpin-like spur, aids in defense and combat. Another adaptation allows the young to hide submerged from predators with only their exposed bills to act as snorkels above the water’s surface. 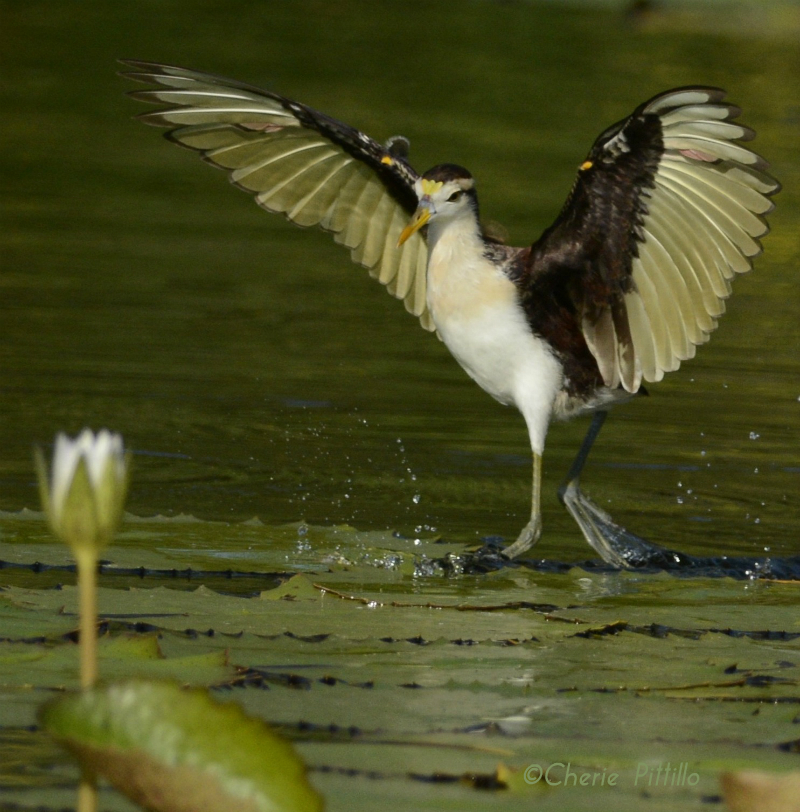 An immature Northern Jacana alights on a lily pad 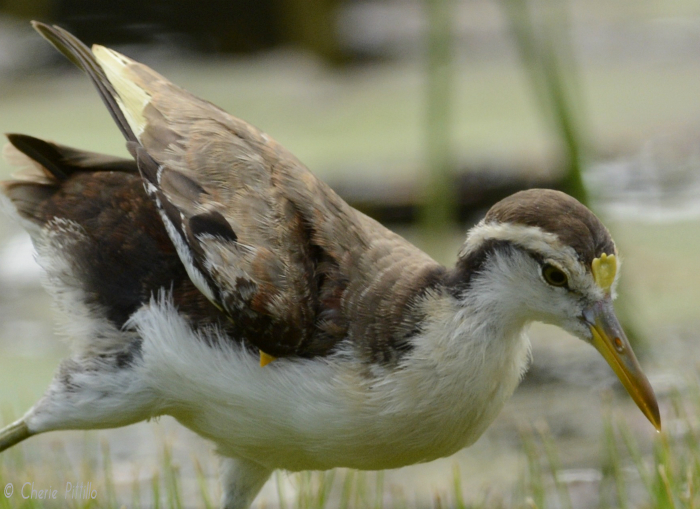 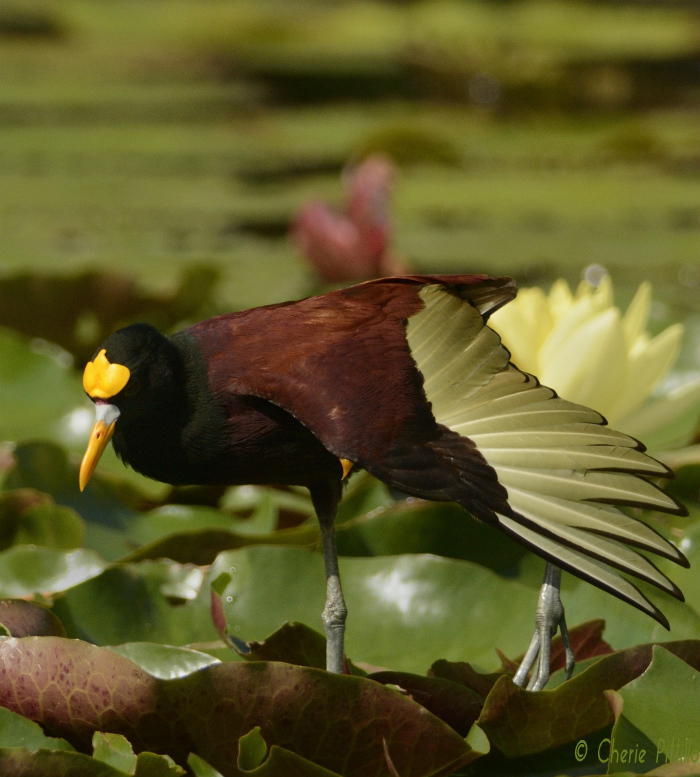 Yellow wing spur of the Northern Jacana is used for defense

A shorebird of marshes, ponds, or even flooded pastures, the Northern Jacana, inhabits freshwater/brackish areas to feed mostly on insects found on water lilies and other floating plants. Nicknamed lily-trotters or Jesus birds, elongated toes disperse the bird’s weight to walk on top of lily pads. It’s a specialized niche where most bird species cannot walk or feed. 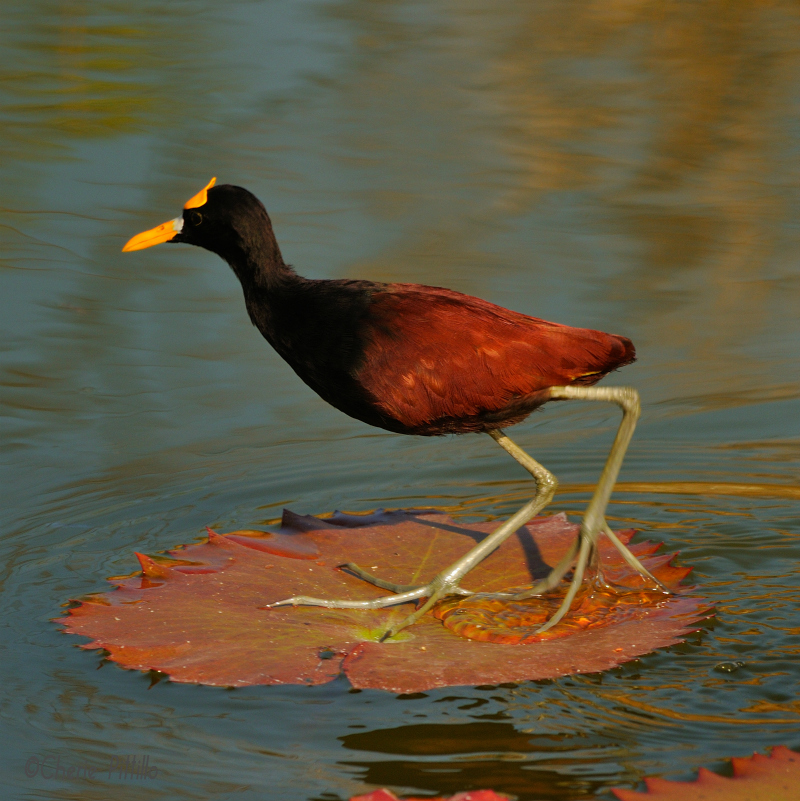 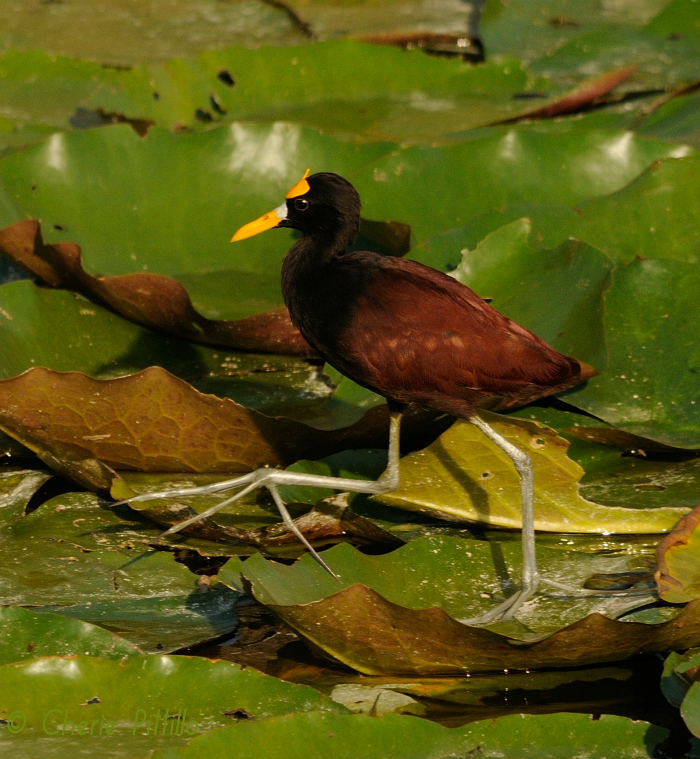 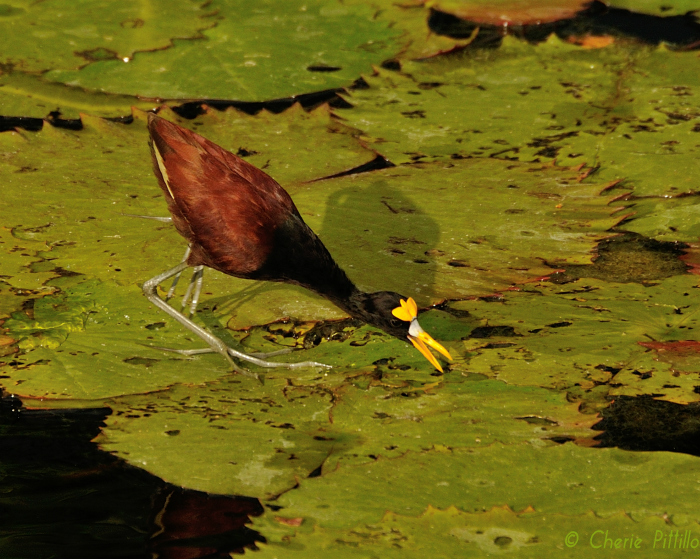 Unlike most bird species, the Northern Jacana can feed on top of floating plants

The Northern Jacana also dines on small fish, snails, and seeds. Sometimes it pulls up a lily pad with its bill and feet to hunt for insects. I did photograph a family, less their mother of course, feeding in flooded grasses adjacent to a pond. It’s as if it lives and eats on a water bed. 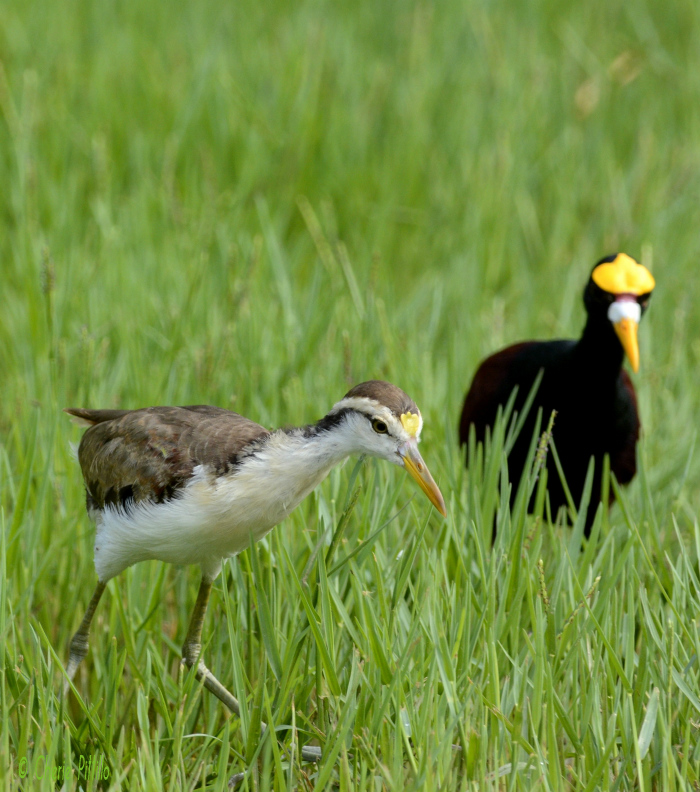 Reverse your indoor role, trot out of your pad, and uncover nature’s wonders.

PHOTO NOTES: As my readers for two years, you know I try to convey behavior in this column. Sometimes I use lesser quality images to document behavior if those are the only images I’ve taken. I was fortunate to photograph from a distance the Northern Jacana father and chicks at one of the six miles of lagoons of Mayakoba, Playa del Carmen. Other images were photographed at two Merida parks.

DISCLAIMER: References do not agree on details about this species. Here are my resources: Sal a Pajarear Yucatan, 100 Common Birds of the Yucatan Peninsula, A Guide to the Birds of Mexico and Northern Central America, Birds and Reserves of the Yucatan Peninsula, Life Histories of North American Marsh Birds, Lives of North American Birds, Southern Mexico, Birds of Costa Rica, A Neotropical Companion, Sibley Guide to Bird Life and Behaviors, , http://macaulaylibrary.org/Cornell Lab of Ornithology  http://beautyofbirds.com/northernjacana.html