Crik-ik-ik-ik, ik, ik, ik http://macaulaylibrary.org/audio/167380   A young male Snail Kite calls from its perch on an overhanging limb ten feet above a shallow freshwater pond. It searches for its primary prey, the apple snail, a slippery, slimy snail delicacy.  Wonder if the snail tastes like an apple? 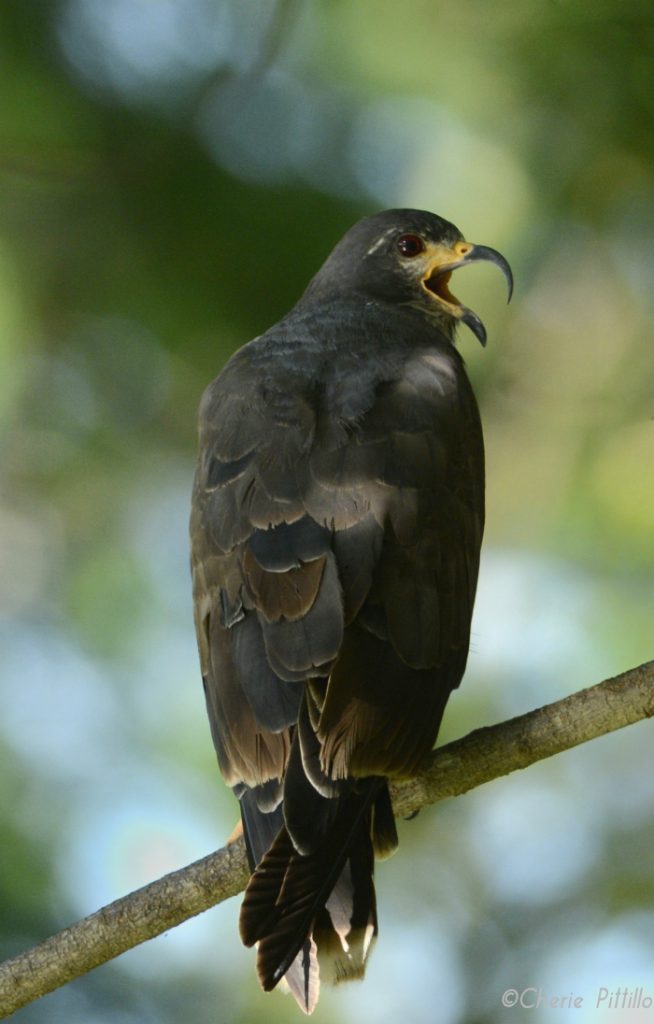 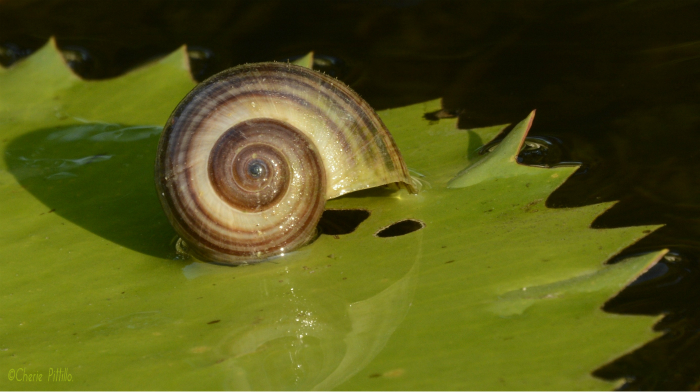 Empty snail shell after Snail Kite slurped out the escargot 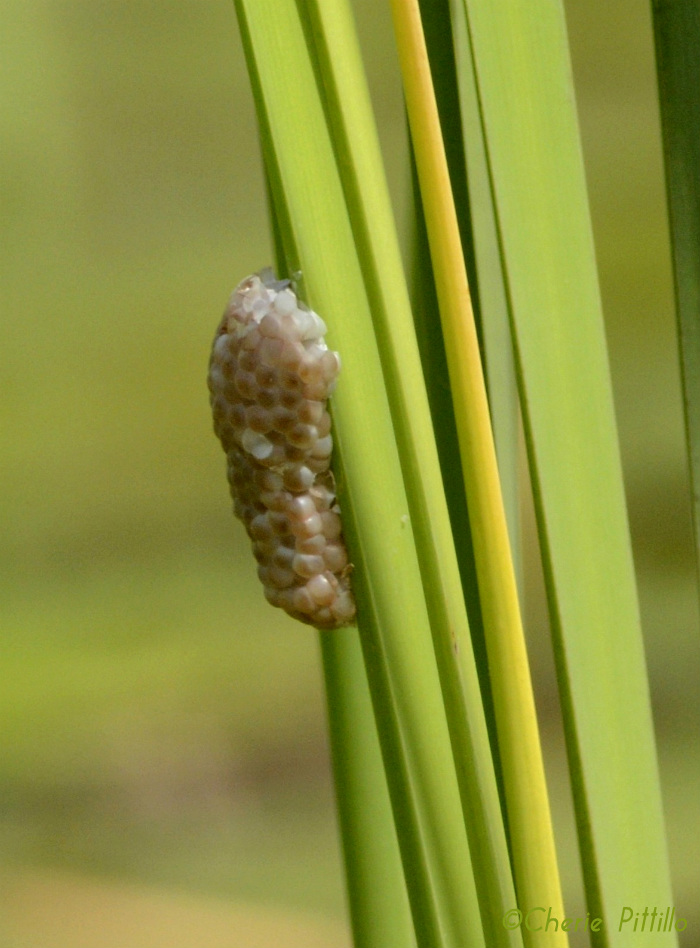 Patiently the kite sits, watches, and waits. Suddenly it spies an unaware snail. The kite moots, shoots, and loots.  In other words, it defecates backward to lighten its load before flying down to pick up its food. 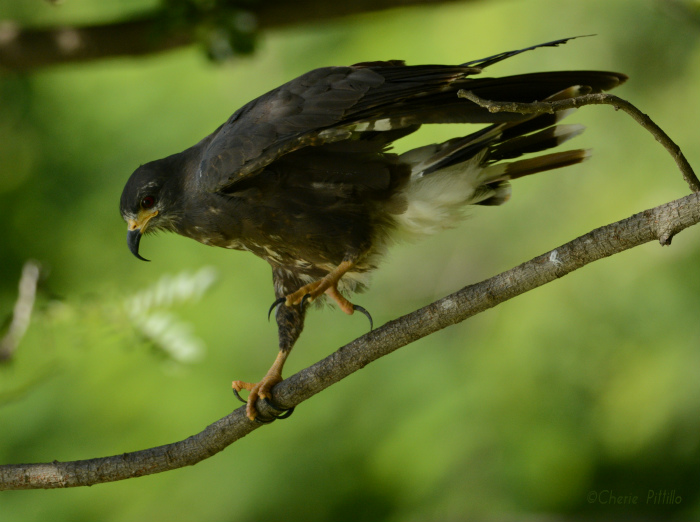 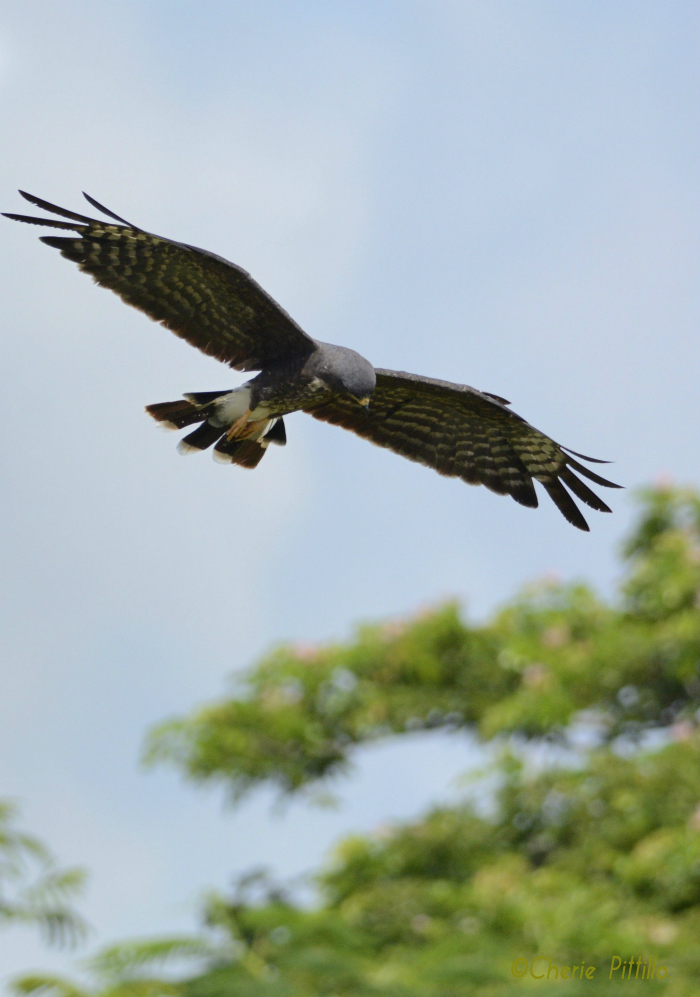 Other times, the Snail Kite flies at a snail’s pace over a marsh or pond with its head down looking for the chosen one. Typically this 18 inch tall bird grabs a snail with one of its talons. Sometimes it goes into water up to its belly. With a toe hold on the snail, it returns to a perch for its picnic. As it holds the snail with one foot, it carves out the juicy delight with that wonderfully equipped snail extractile hooked bill. Meanwhile, the snail wonders how it became airborne and is now in shell shock. 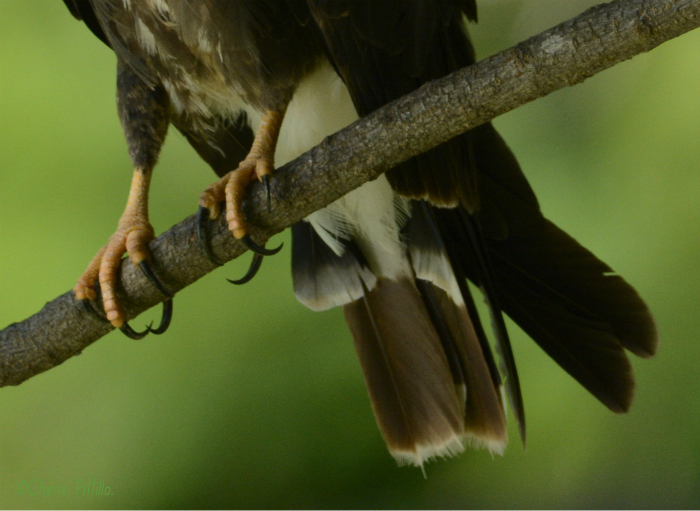 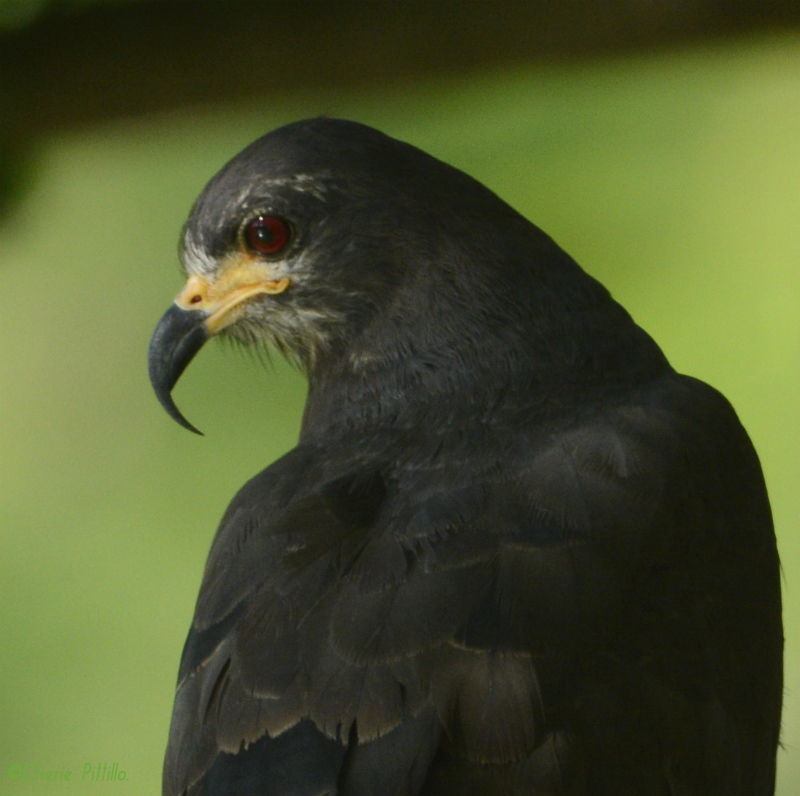 After dining, the Snail Kite flies to another branch to rest. While there, it stretches out its wings or its legs. In addition to snail slurping, the bill assists in cleaning and preening plumage. 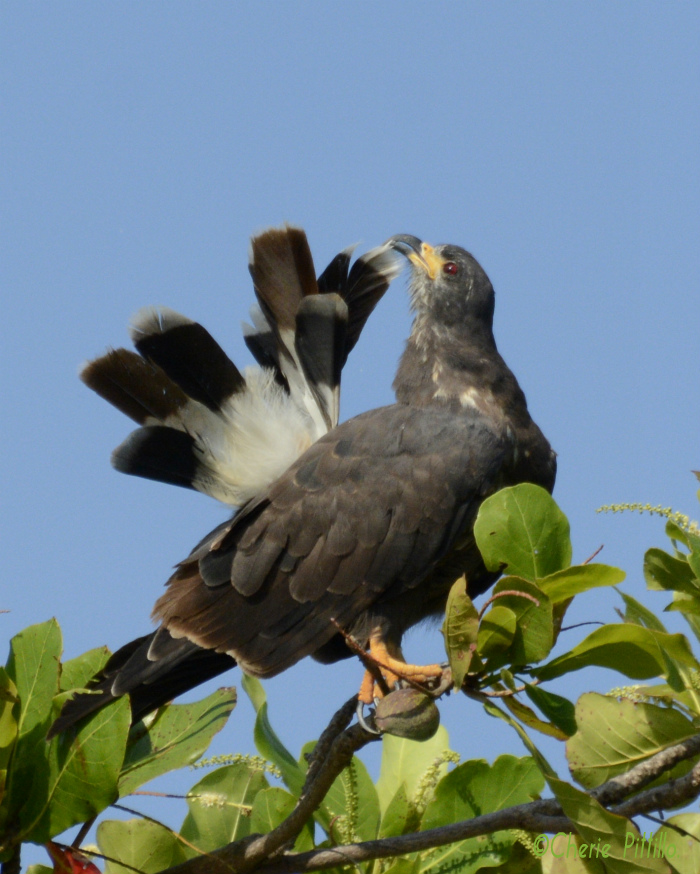 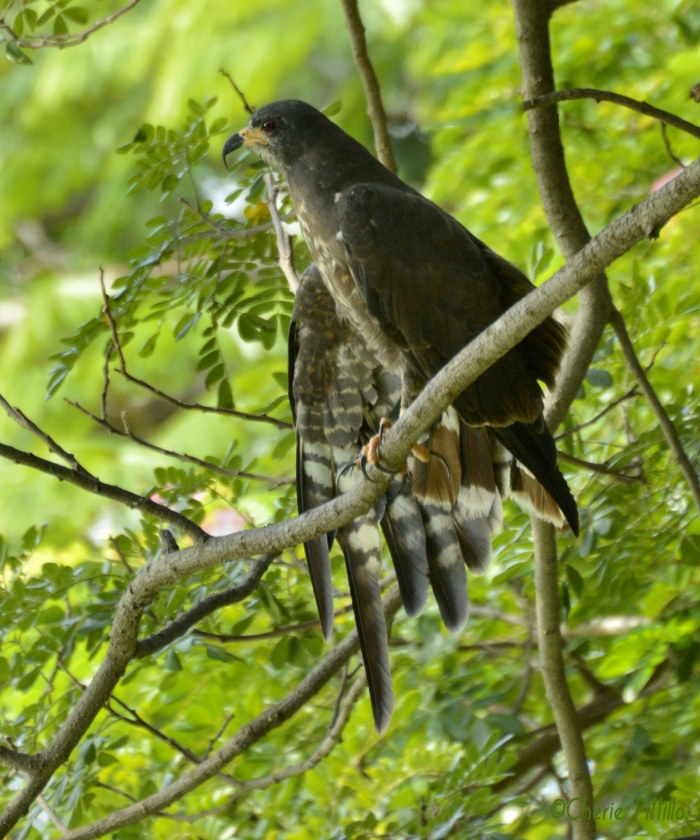 Occasionally the Snail Kite seems to use it maniacal call just before it flies to pick up its prey. I notice when it yawns, the head is thrown farther back. 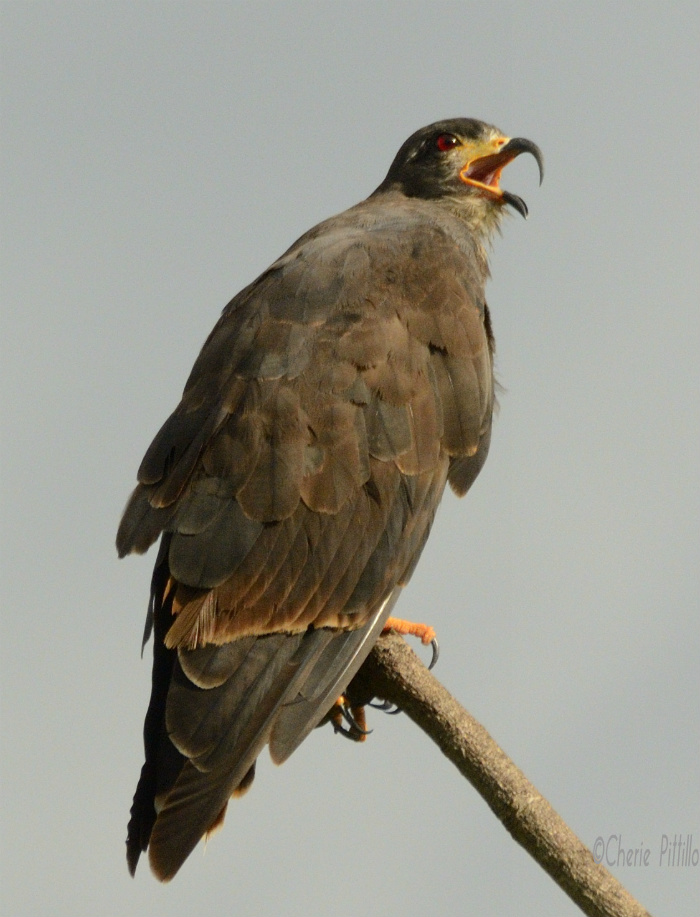 When the Snail Kite calls, the head isn’t tilted up 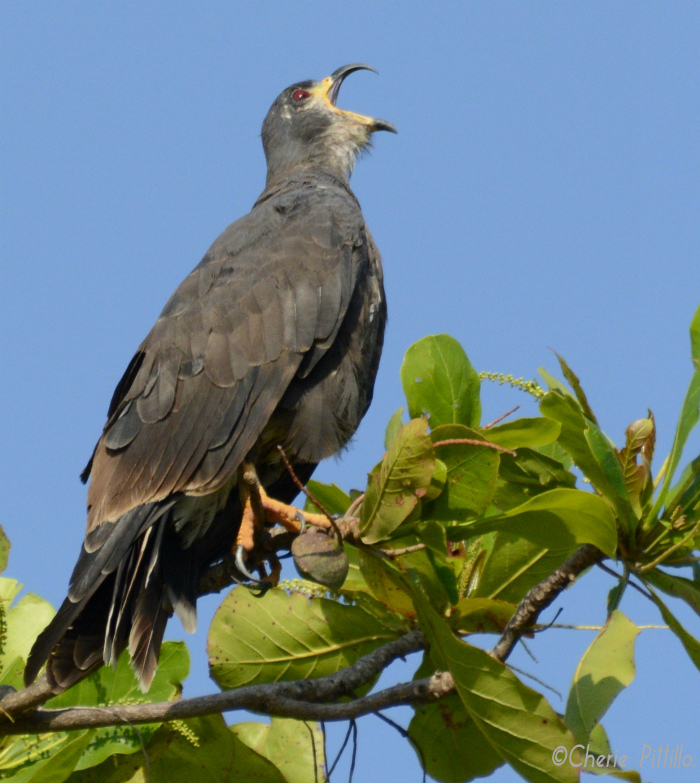 When Snail Kite yawns, head is lifted up higher than when it calls

Sometimes a brownish female Snail Kite, with buff colored face and eyebrows, visits a Merida park on her snail hunt. At another Merida park, an adult slaty gray male surveys his marshy kingdom. Both adults reveal red eyes. During courtship, the male performs aerial displays and entices the female with an unimaginative gift, an apple snail. After nest building, egg laying, chick hatching, and six weeks of feeding the chicks, either parent may leave to find another temporary spouse. 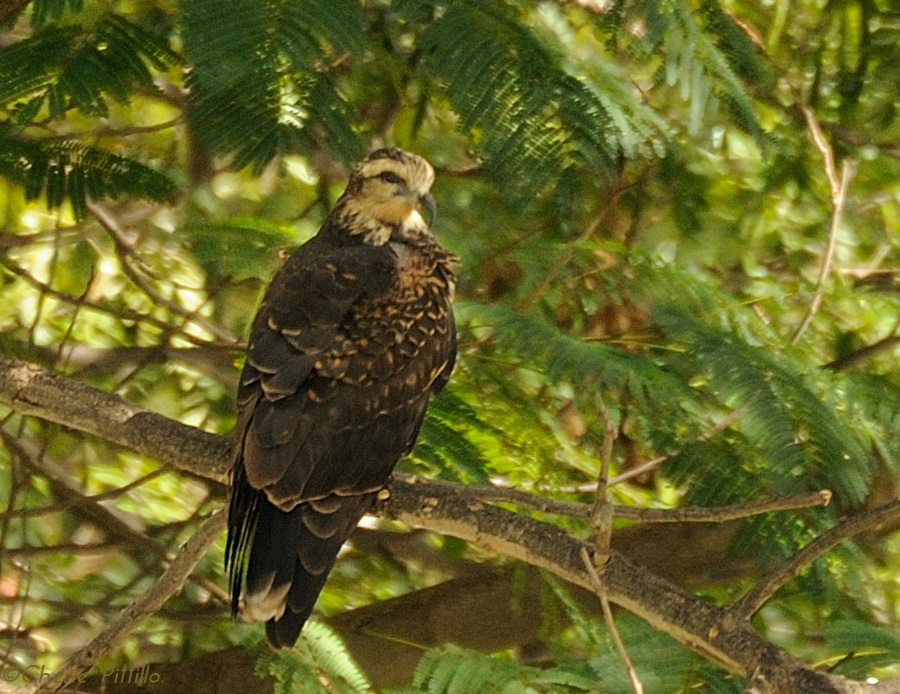 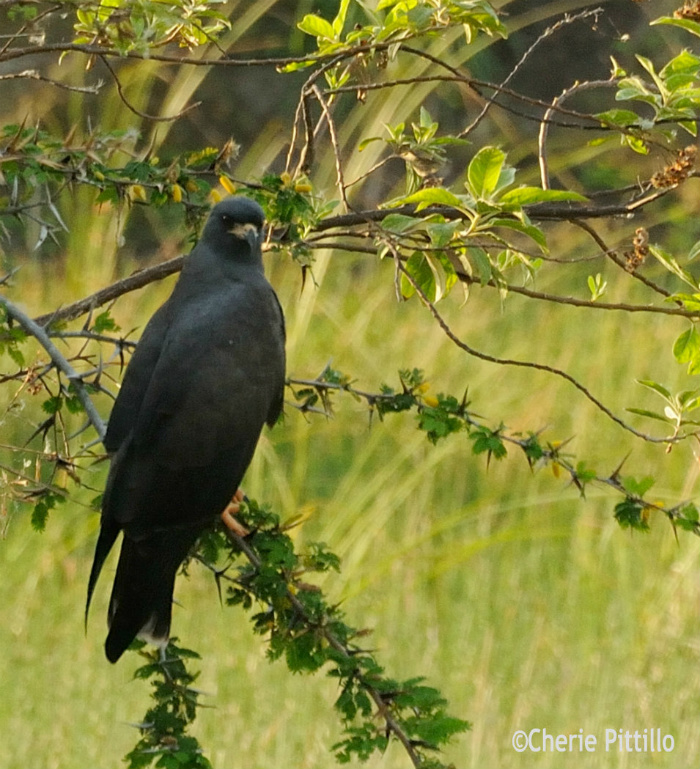 The Snail Kite is an endangered species in Florida, but it is not endangered in its range from southern Mexico to Upper South America. This nomadic species doesn’t migrate but it relocates its home depending upon water levels. The bird’s talons have to be able to latch onto the snails in shallow water. During drought, the Snail Kite switches from its primary diet of apple snails to other snail species and small turtles.

Although I see only one at a time at Eco-park and Aqua Park, this species is more common at Laguna Bacalar and the wetlands of Campeche. When food is readily available, then the Snail Kite becomes social to roost and nest in large communities.  I’d love to see more than one at a time. 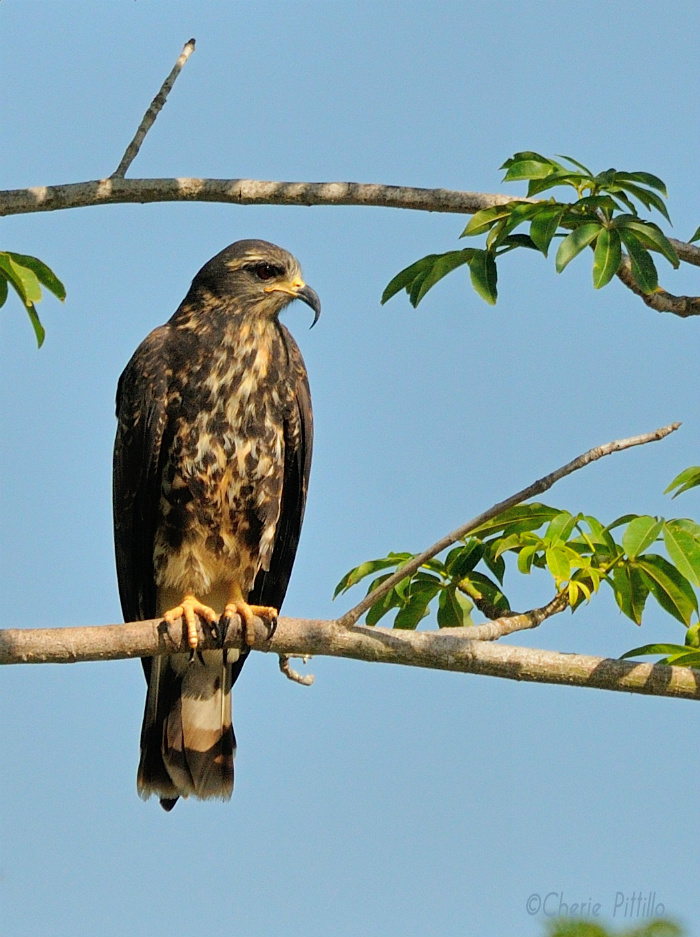 Go wander at a leisurely snail’s pace in nature.

DISCLAIMER: References do not agree on details about this species. Here are my resources: Sal a Pajarear Yucatan, A Guide to the Birds of Mexico and Northern Central America, Birds and Reserves of the Yucatan Peninsula, Lives of North American Birds,Birds of Costa Rica, A Neotropical Companion, Sibley Guide to Bird Life and Behaviors, , http://macaulaylibrary.org/ Cornell Lab of Ornithology,     http://www.allaboutbirds.org/Page.aspx?pid=1235,http://www.nps.gov/ever/naturescience/snailkite.htm,  http://www.peregrinefund.org/explore-raptors-species/Snail_Kite , http://animaldiversity.ummz.umich.edu/accounts/Rostrhamus_sociabilis/,http://neotropical.birds.cornell.edu/portal/species/identification?p_p_spp=120316